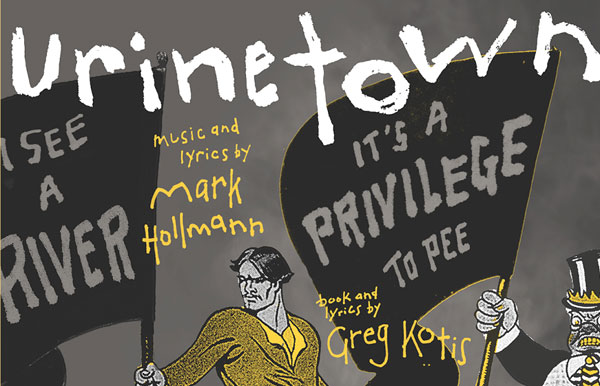 A sidesplitting sendup of greed, love, revolution (and musicals!), in a time when water is worth its weight in gold.

Fort Collins– The Colorado State University School of Music, Theatre, and Dance proudly presents: Urinetown, The Musical. This two-weekend run will take place on May 3, 4, 5 at 7:30 p.m., with a 2:00 p.m. matinee on May 6. All of the performances will take place in the University Theatre at the University Center for the Arts, located at 1400 Remington Street.

From New York City’s Fringe Festival to Broadway hit, Urinetown is a hilarious musical satire of the legal system, capitalism, social irresponsibility, populism, bureaucracy, corporate mismanagement, municipal politics and musical theatre itself! Hilariously funny and touchingly honest, Urinetown provides a fresh perspective on one of America’s greatest art forms. In a Gotham-like city, a terrible water shortage, caused by a 20-year drought, has led to a government-enforced ban on private toilets. The citizens must use public amenities, regulated by a single malevolent company that profits by charging admission for one of humanity’s most basic needs. Amid the people, a hero decides that he’s had enough and plans a revolution to lead them all to freedom!

Joining CSU Theatre as guest director is Richard Cowden, the coordinator of Graduate Programs in Arts Administration at Castleton University in Castleton, Vermont. He was the former coordinator of Fine and Performing Arts Advising at Metropolitan State University of Denver and artistic director of Denver’s Edge Theatre Company. We are excited to welcome Mr. Cowden back to Colorado.

“Despite its atypical title, Urinetown is a fairly traditionally structured American musical that happens to have a rather absurd premise,” Cowden said. “Along the way, the script and score both offer sharp parodies of classic American musicals—people will recognize elements of shows like Les Miserables, West Side Story, and a timely parable about corruption and human dignity. There’s a lot for everyone.”

Continuing this spring, venue seating is reserved. Tickets are *no charge for CSU students, $8 for youth (under 18), $16 for seniors (62+), and $18 for the public. Tickets are available at the University Center for the Arts (UCA) ticket office in the UCA lobby Monday through Friday, 3:30-5:30 p.m. and 60 minutes prior to performances, by phone at (970) 491-ARTS (2787), or online atwww.CSUArtsTickets.com. Youth tickets must be purchased in person at the Ticket Office. All tickets are subject to a $1 ticket fee for both online and at-the-door purchases. Advance ticket purchase is recommended to avoid lines and further at-the-door fees.

by Cursor Magnet - 3 weeks ago

by Senior Helpers of Northern Colorado - 4 weeks ago

by New Belgium Brewing - 2 months ago