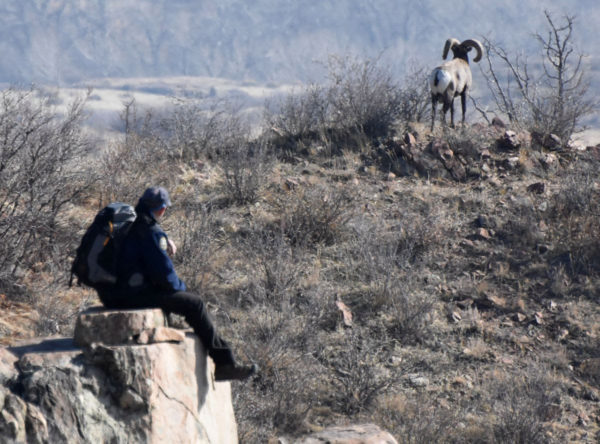 DENVER – When it comes to conservation of Colorado’s majestic and agile Rocky Mountain bighorn sheep, Colorado Parks and Wildlife staff battles jagged walls, steep cliffs and the weather, both good and bad, across the state to fulfill their mission.

Such was the case Wednesday along I-70 where the winds were whipping and temperatures in the 20s. CPW staff conducted a survey of the Georgetown bighorn sheep herd, spreading teams out across eight different locations looking for rams, ewes and lambs from Golden to the Continental Divide.

CPW monitors the state’s bighorn twice annually, once in the summer and once in the winter to gauge how many lambs survive their first six months as well as to calculate the ram to ewe ratios. The winter is the preferred survey time because the rams, ewes and lambs all congregate together in lower elevations during this breeding season, referred to as the rut.

“Bighorn herds are surveyed to monitor productivity, general abundance trends, distribution and disease,” Wildlife Biologist Ben Kraft said. “This allows CPW to manage towards the herd’s objectives, which are set by the public. The surveys that are conducted in Georgetown today, have been occurring since 1948.”

So you see, this is a longstanding practice of the state’s biologists monitoring its wildlife and thus, a lot has been learned through these efforts to help conserve the animal that disease and unregulated hunting almost wiped out in the early 1900s.

Disease can take a toll on Colorado’s bighorns. One historical example of drastic disease impact took place in the Kenosha and Tarryall Mountains. Historical literature states these mountains had the largest sheep herd in all of North America – reportedly in the 2,000-3,000 range. Today, both the Kenosha and Tarryall herds range in size from 40-60, so disease can cause an all-age die-off.

“Disease is a major concern because it may lead to respiratory illness throughout a herd,” Kraft added. “This can result in a large proportion of the herd dying and the absence of lambing for a very long time. In a worst case scenario, entire herds have been lost because of disease. Researchers are still trying to understand which ‘bugs’ and environmental conditions lead to all-age die-offs, but the mechanism of disease introduction into bighorn herds is co-mingling with domestic sheep and goats.”

A known remedy to help combat disease epidemics is to keep herd sizes from getting overpopulated and to keep domestic and wild sheep separated.

“When bighorn herds increase beyond the carrying capacity of their habitat, herd productivity decreases while disease increases,” Kraft said.

That is just some of what has been learned through these surveys over the years, which take place in a variety of ways. However, many of Colorado’s bighorn sheep populations live in remote, rugged areas with limited human access, making this information expensive and time consuming to collect.

A lot of miles – many of them of the steep variety – are hiked by CPW staff, but the use of aerial drones, fixed-wing aircraft and helicopters help from above on many surveys. Whether surveys are conducted in the air or on the ground depends on funding and environmental conditions.

The Northeast Region team of CPW biologists has plans for six bighorn surveys this winter. The Southeast has 11 on its docket and the Southwest has eight. All are aimed to take a look at what is an estimated statewide bighorn population of 7,000 animals.

The current affairs among Colorado’s bighorn sheep is that the state’s herds are healthy and in good numbers. That is thanks to the efforts of many constituents dedicated to conservation of the state’s wildlife.

“The persistence of bighorn herds is a community effort by landowners, local and federal land managers and CPW,” Kraft said. “When I see the robustness of bighorn in Colorado, I know that a significant amount of forethought and effort has gone into managing Colorado’s habitat and appreciate the natural landscapes that Colorado has to offer.”