Live music, local artisans, vendors and a glorious fall day drew more than 500 people to the LaPorte Festival on Saturday, October 12, 2019.  The purpose of the festival, according to Festival Committee member Paula Brobst, was to bring people together while giving back to the community.  The committee plans to donate some of the festival proceeds to Cache la Poudre elementary and junior high schools to help students unable to pay their lunch fees. They also plan to put money toward improving the sign that welcomes visitors driving to LaPorte from the west on County Road 54G. 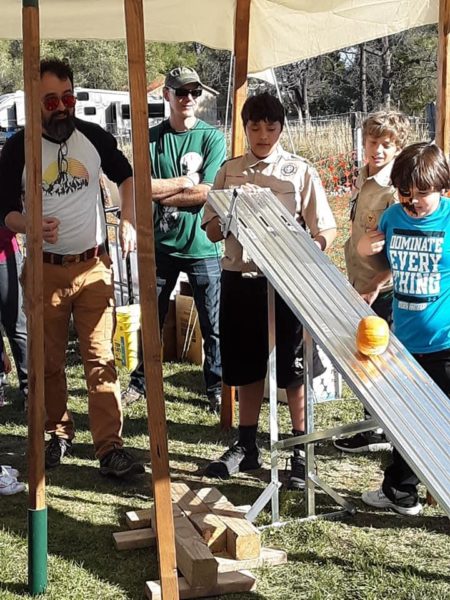 Three bands — Carlton Pride, Larry Lewis, and Meglomaniaxe – entertained festival attendees as they chatted with neighbors and friends while browsing among a wide variety of crafts, baked goods and artwork presented by more than 25 vendors.  Special thanks goes to Tracey Knapp for providing the stage! Lunch was covered by Vern’s Place offering (world-famous) cinnamon rolls, chili and burritos, and The Goodness Food Truck selling down-to-earth gourmet goodies. Boy Scout, Troop 87, led games for kids – pumpkin painting, and a dog costume contest – along with a veggie car race. A silent auction, featuring articles and gift certificates donated by local artists and businesses, raised funds for No LaPorte Gravel – a non-profit organization working to preserve the rural LaPorte lifestyle.