Just a few weeks before Christmas, we came from all across the country – clergy, people of faith, community organizers.  An incredibly diverse coalition of religions, ages, races, economic backgrounds.  All of us there to walk the beach toward the San Diego border to offer a blessing. 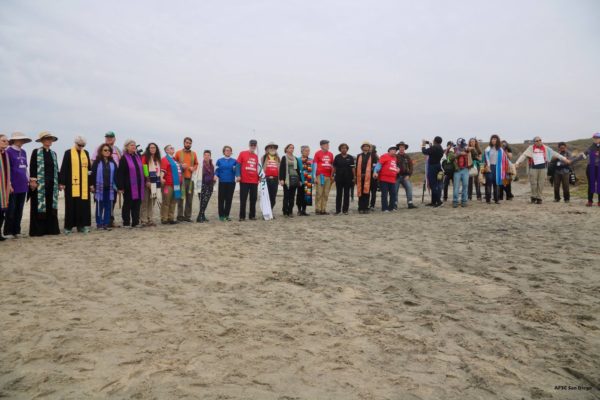 The day before, we’d spent over four hours in training, preparing for the moment we’d reach the border wall. We’d anticipated we would move into the restricted area until we could see or touch the migrants on the other side who’d gathered to receive the blessing from those of us willing to risk arrest. “Arrestables,” they called us.

We assumed that at some point Border Patrol would tell us to stop, tell us that we would be arrested if we proceeded. But we did think that most of the 100 or so of us “arrestables” would make it to the zone before that.

But that was not how it went. Instead, as we got closer, a line of agents started lining up from the end of the concertina wires to the lapping of the waves. Border Patrol agents were in full military gear, carrying large weapons, stone-faced. There was no clear way in.

As we got nearer, we sang over and over:

“We are not afraid. We will march for liberation because we know why we were made.” 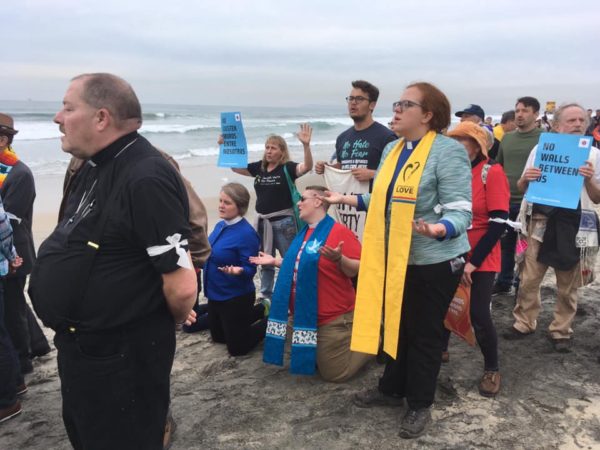 I had just written the plan for our Christmas services at Foothills Unitarian Church, where I serve as a senior minister, so I was also thinking about the many times in scripture that people are reassured: “be not afraid.” And I remembered how in my faith community, we’ve often talked about how courage does not mean you are not afraid, but only that you are willing to remain steadfast to your commitments to love and care in the widest possible sense, even when it brings challenge — or risk.

Which is why I felt – not without fear, but also, connected to a movement of love, courageous love.

Embodied there in that community of strangers and now friends – with our arms open, praying, singing, clear, steady.  “We are not afraid….”

And then, just as quickly, all that fell away.  An agent got aggressive, or another friend was pulled across the line and arrested, or the agents yelled, “Back up!” while moving toward the rows of us singing and praying. And I was afraid again, and unsure, disoriented, and disconnected.

Put this back-and-forth on repeat, and you’ll understand my experience for about two hours in prayer and in protest facing down a row of increasingly aggressive agents at the border.

My children asked me when I got back if our event would make any difference if the migrants would be treated better. If children would stop being separated from their families. They meant, right away.

So, why did you go, they wondered?

We tell them all the time to follow the rules and to obey the law, how important it is to avoid the criminal justice system – and here, their mom was willingly risking arrest – and I wasn’t even able to ensure a single child would be reunited with their parent, or that a family would find the freedom and security they came seeking. It was hard to explain.

I told them that sometimes, a law made by the government is not the same as a law that we know is right in our hearts. I reminded them about slavery, and about how it was legal. It took a lot of people, willing to risk their own safety and their own lives, a lot of years of protest and breaking the government law, to make sure that the laws of our hearts would not be broken anymore.

I told them that we were there to remind people that what is happening at our border is not right. Even though it might take a long time for people to listen, we still need to speak up and act. Do our part.

As Nelson Mandela has said, “It seems impossible until it’s done.”

And one day, it will be done.

And then, if like our world today, things that were once done become undone, then we march again.

Which reminds us most of all, that none of this is inevitable.

We have a choice about how we will respond to those seeking refuge, how we will treat these thousands of vulnerable people – who will not stop coming even if we put up a bigger wall. Climate change and the ever-increasing presence of extreme poverty and violence across the globe will ensure that migration is a constant.

And it’s a constant that doesn’t need to be a problem to be solved. The people arriving at the borders are people, after all.  People with gifts, skills, drive, imagination, and heart; people who can contribute to solving our shared challenges in ways we have not yet even dreamed.

It’s been nearly a month since my trip to the border. And I keep thinking about that fear I felt, and then the courage. And the repeat.

Our world today is going to require that we remain connected to this tension. That we push ourselves a little (or a lot) beyond our comfort zones, on behalf of a better world.

And it’s going to require that sense of collective courage I felt with my knees on the sand and my arms open to the universe – even with the helicopters circling and the men screaming – singing, “We are not afraid.”  The power of working together, across difference, for the common good.

It’s the same sort of courage the organizers told us the migrants reported tapping into to fuel their journey: we know we can make the journey when we go together.

Together we have everything we need to keep moving forward – to march, and sing, and live for liberation. And repeat, and repeat, and…