The wait is over. AccuWeather’s annual winter forecast for the lower 48 is out. As 2019 comes to a close, an active winter season will get underway for the northeastern United States.

The Southeast, however, is more likely to be targeted by rain than wintry weather. 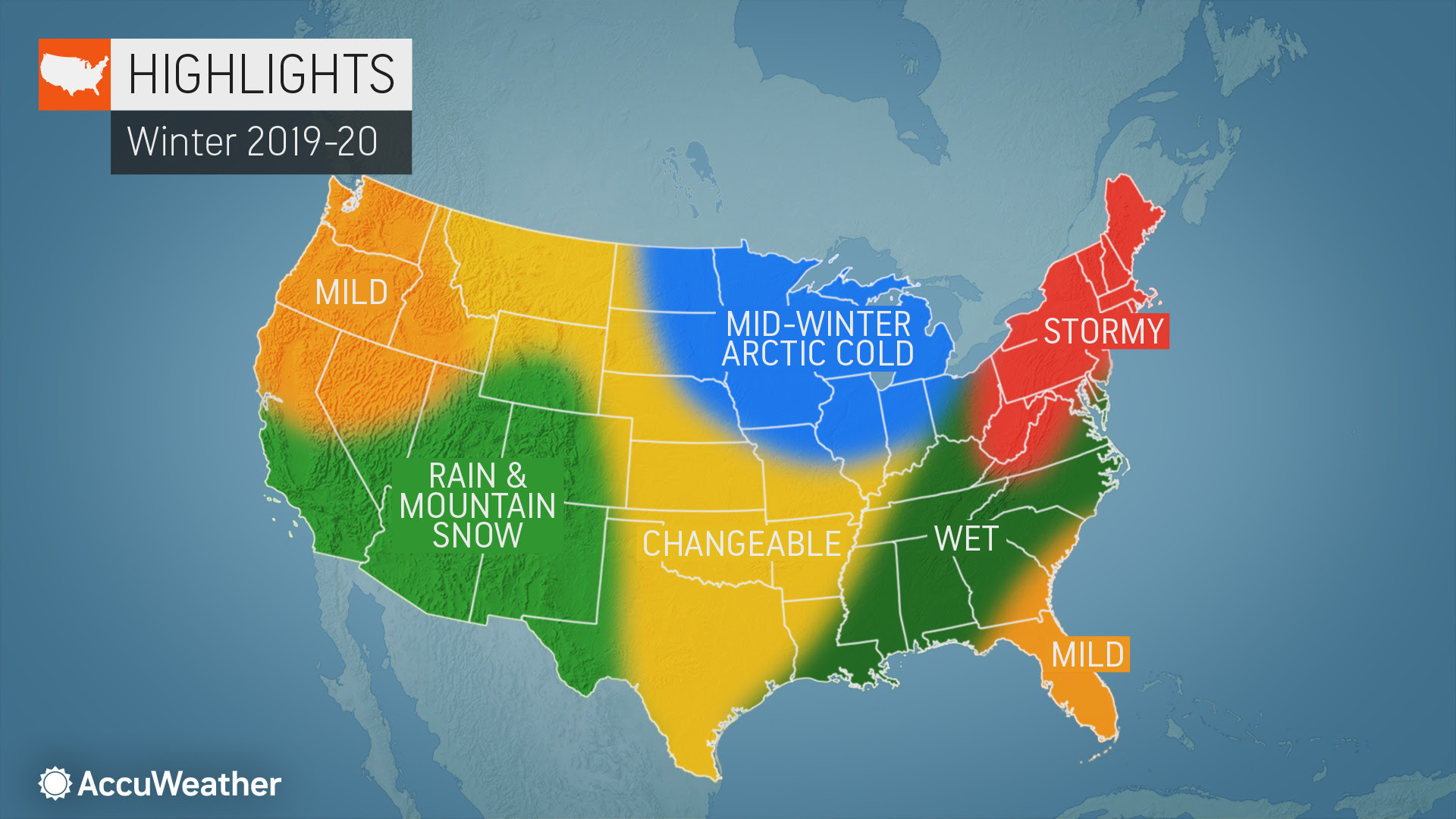 A cool, unsettled pattern is in store for the Southwest and California this season.

AccuWeather Expert Long-Range Forecaster Paul Pastelok said: “At times, these areas could also see back-and-forth conditions, between some periods of dry weather and some active weather in the early winter, which is not really typical.”

In California, the winter will yield enough precipitation to stave off drought conditions into the spring.

“I think they will get ample snowfall, just enough that will fill those reservoirs up in the spring and early summer. It’s the late summer, of course, that becomes more critical,” Pastelok said.

A normal season in terms of snowfall will also translate to decent ski conditions for resorts in California.

In the Northwest, wintry weather will be more scarce than usual.

Strong high pressure over the region is likely to lead to drier conditions and above-normal temperatures.

“I can see some places this winter in the Northwest being about 20 to 40 percent lower on the snowfall compared to average,” he said.

The deficit is likely to hinder the region’s ski season, and have knock-on effects into springtime.

“For those who rely on hydropower: if water levels are down, it could have an effect on cost.”

Despite a few cold spells across the Northeast during autumn, winter’s chill won’t arrive until at least the end of 2019.

Pastelok said: “I think you’re going to see a touch of winter come in in December. But I think it’s full force will hold out until after the New Year.”

Once the wintry weather does get underway, an active season will be in store.

“Whether or not it’s snowstorms, ice storms or mixed events, I do feel this is going to be an active year for the Northeast,” he said.

Above-normal snowfall could be in store for areas from New York City to Boston.

Meanwhile, cities farther south, including Washington, D.C., and Baltimore, will be more likely to see a mix of rain and snow.

While the Northeast braces for snow and cold, the Southeast is more likely to experience a wet couple of months.

Water temperatures from the Gulf of Mexico to the Southeast and mid-Atlantic coasts are running higher than normal, Pastelok said.

As storms move into the east early on in the season, the warm water could generate a significant amount of rain.

However, it’s not out of the question that the region could experience a winter storm, similar to last season, which brings snow or ice to areas like Winston-Salem, Charlotte or Asheville.

A milder-than-normal weather pattern will kick off the season in December across the northern and central Plains states.

But it won’t last for long.

Arctic air is expected to surge into the region at points during the season, although it’s too soon to tell exactly where the coldest conditions will take hold.

Pastelok predicts near- to below-normal snowfall across the northern Plains, with near- to above-normal totals in the central Plains.

Further east, in the upper Midwest and Great Lakes, cold air will encourage a number of lake-effect snow events.

Residents will want to stock up on shovels, as an above-normal season for snowfall is in the offing.

The southern Plains will experience a “back-and-forth” weather pattern for much of the winter.

Pastelok said: “When we say back-and-forth, we’re talking about extremes.”

“In January, you may get a couple of chilly air masses, but it’s offset by December and February when the temperatures actually end up being above normal,” he said.

Early on, the region may see a few wintry events with snow and ice before milder air returns.

“The cold air will be lacking from time to time,” Pastelok said. “The best chance of getting any significant chill is probably in January for Dallas and Oklahoma City.”

See the Full Report on AccuWeather.com >>