The transition to broadband has become more urgent in the last two and a half years, and it’s being led by smaller, community-owned broadband companies. Nowhere can that be seen more clearly than in Colorado.

This year, three of the top five fastest ISPs in the nation, as named by PC Magazine, were Colorado-based: Longmont’s community-owned NextLight (no. 2), the municipal Fort Collins Connexion (no. 4), and Allo Communications, whose 28-city service area includes partnerships with Breckenridge, Erie,  Fort Morgan, Greeley, and Hudson.

As Colorado pushes to bring high-speed broadband service to 99% of state residents, these Northern Colorado broadband companies serve as a beacon of success. While it’s been said by FCC Chair Jessica Rosenworcel that a gigabit-download and 500-megabit-upload reality may be closer than we think, these community ISPs are unlocking growth and future-proofing our communities by making high-speed internet accessible and affordable for all.

What’s more, the high-speed service of NextLight and Connexion’s fiber-optic networks can easily accelerate those speeds to the needs of the future. For their communities, economic growth is not only possible but a reality.

“Who would settle for watching their community survive when they could instead help it thrive?” asked Valerie Dodd, Executive Director, NextLight at the City of Longmont. “A connected community holds the tools for success.”

Longmont’s NextLight and Fort Collins’ Connexion are success stories of what it looks like to unlock a prosperous future for NoCO’s businesses and residents. Both NextLight and Connexion would be glad to speak further about the reasons behind their own success stories, and the future they see for their communities in an increasingly connected world.

NextLight is a community-based and community-owned fiber-fast gigabit internet (and more) service in Longmont, CO. With symmetrical gigabit fiber, NextLight’s fast and reliable connections left it recognized as one of the fastest ISPs in the nation. Birthed out of Longmont Power & Communications, NextLight’s efforts to reduce the digital divide of their city have been nationally praised. To learn more, visit https://mynextlight.com.

Fort Collins Connexion is a municipal broadband utility that was created by and for their community whose sole purpose was to improve life and business in Fort Collins through better, more affordable internet. Connexion now offers the fastest internet speeds available with symmetrical 1 and 10-gigabit service, and unmatched reliability, all at an affordable price and with no long-term contracts. Their investment in building out a 100% fiber network ensures that Fort Collins is future-proofed; this investment was an investment into the future of our community. To learn more, visit https://fcconnexion.com. 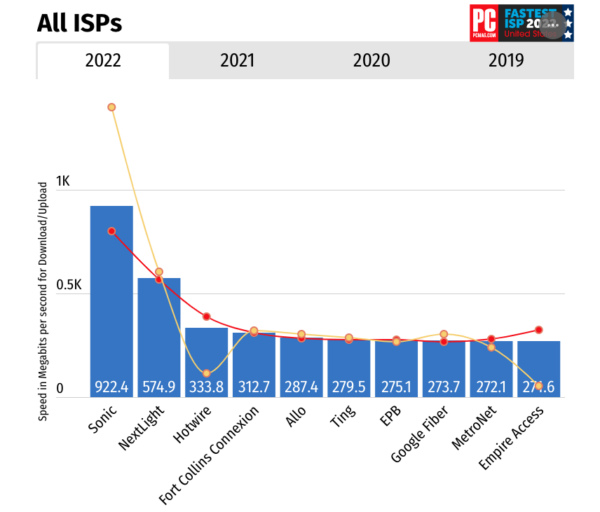