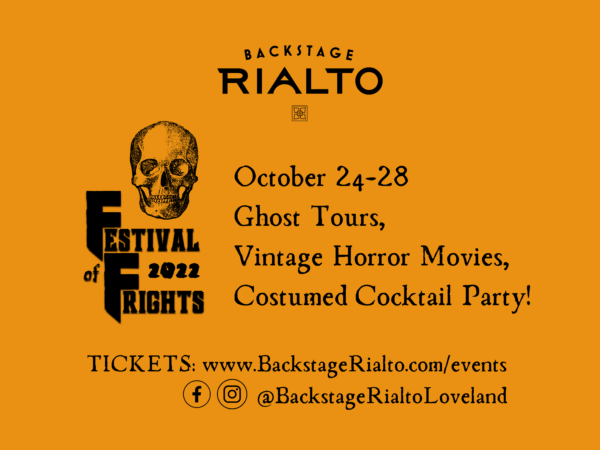 Backstage Rialto, a 501(c)3 support organization for the Rialto Theater Center in Loveland, Colorado, presents “Festival of Frights” October 24-28.  The Halloween festival will include spooky historic tours of the Rialto Theater, a special theatrical screening of the 1953 classic horror film “House of Wax”, starring Vincent Price, and the annual Ooze & Schmooze costumed cocktail party, preceding a theatrical showing of the 1958 cult classic horror film, “The Blob”, starring Steve McQueen. The week of events serves as a fundraiser for Backstage Rialto, with proceeds supporting programming efforts such as the Backstage Rialto Children’s Theatre and vital technology upgrades to the Rialto Theater Center.

The Rialto celebrated its 100th anniversary in 2020 and held an official Centennial Celebration earlier this year.  The history tours, titled “Ghost Tales: Historic Rialto Tours” brings to light some of the unexplained happenings during the last 102 years, which includes plenty of spooky and macabre tales of real events from the theater’s history. The tour also gives participants behind-the-scenes access to the nooks and crannies of Loveland’s premier film and performing arts venue that are not normally accessible to the public.

Known as the ‘Master of Menace’, classic film actor Vincent Price is perhaps best known to younger generations as the voice of the villainous Professor Ratigan in Disney’s “The Great Mouse Detective” and for his iconic monologue in the Michael Jackson song “Thriller”. Throughout his career, he made 105 films of all genres and had an extensive theater, radio, and television career. Backstage Rialto’s Development Associate Chad Kennerk, who assists on the Price Estate, said, “Vincent Price is one of cinema’s most iconic villains. What many people don’t know about Vincent, is that he was a great renaissance man and art advocate. He was a driving force in raising awareness for and appreciation of art in the United States, particularly American Art. Given Loveland’s rich sculpture history, there’s no better Vincent Price film to show at Halloween than “House of Wax”, where Vincent stars as a scorned sculptor seeking revenge!” The film will open with a special video introduction from Vincent Price’s daughter, author, and renowned public speaker Victoria Price, uniquely recorded for the occasion. Audiences are encouraged to join Backstage Rialto upstairs in the Devereaux room before the movie for a drink and the old-time radio presentation of Vincent Price in “Three Skeleton Key”. The Bridge Bar will be offering a themed specialty cocktail for the occasion.

The showing of “The Blob” is a tip of the hat to the Rialto’s very own ‘blob.’  In the late 1970s a long drip of tar, oozing from a ceiling patch, menaced theatergoers, especially those that dared to sit directly below it.  This will be the third annual showing of “The Blob” film and feature a special video introduction from Phoenixville, Pennsylvania, where the movie was filmed. Bob Trate, the Director of Programming for The Colonial Theatre brings “Blobfest” to the Rialto with a special introduction that will take audiences to iconic filming locations from the movie, including the interior and exterior of the historic Colonial Theatre. For 23 years, the annual festival in Phoenixville, PA commemorates the Colonial’s place in cinematic history as a filming location for the 1958 classic. The introduction video will be hosted by the official host of Phoenixville’s “Blobfest” Dash Daring, and Matt McGinnis of “Mystery Science Theater 3000”.

Backstage Rialto is honored to have the encouragement and support of the Phoenixville festival team and plans to continue making “The Blob” a fun tradition for Loveland every Halloween. Jim Doherty, Chairman of the Backstage Rialto board said, “It’s a self-deprecating way to celebrate The Rialto’s history and raise money for theater improvements and supplemental programming. Join us before the movie for our special costumed cocktail party, which we’ve dubbed ‘Ooze and Schmooze’!  The Ghost Tales Historic Rialto Tours will also appeal to anyone that appreciates our local history.  Festival of Frights is a great way to support our beautiful Rialto Theater, as all net proceeds will go towards improving The Rialto experience.” The Ooze & Schmooze costumed cocktail party will take place in the Rialto Theater’s Devereaux room. Tickets are required and include two drink vouchers, small bites, a “The Blob” movie ticket, as well tons of Halloween fun, including a chance to ‘reach into the blob’ and win spooktacular prizes! One lucky party guest will win our grand prize of two tickets to our 2nd Annual Whiskey Tasting (a $150 value)! Guests are strongly encouraged to don Halloween costumes and attend this spooktacular event!

The 1953 classic stars Vincent Price as a scorned wax sculptor who takes revenge on his former partner in turn of the century New York. Join Backstage Rialto at 6:00 pm upstairs in the Devereaux room for a specialty cocktail and the old-time radio presentation of Vincent Price in “Three Skeleton Key”.

Indescribable…indestructible, nothing can stop it! Steve McQueen battles an alien lifeform that threatens to consume his hometown.

Complete details are available at https://www.backstagerialto.com/events