To students’ delight, Suzanne Biedscheid’s garden friends recently lent a hand – or rather a segment – in her kindergarten class at Bacon Elementary School.

Although they were silent, they generated much conversation. Although cold, they encouraged connections. And though they flip-flopped (and flopped again), they helped students gain clarity.

Life lessons aside, the pink-and-brown-bodied worms were simply a hit.

“We’re going to be scientists today,” said Biedscheid, who shuttled her teaching assistants from dirt to school in a Tupperware container. Scientists who seek answers to questions, and who aren’t afraid of things that are gooey, dirty, or yucky.

One by one, students shared “I wonder” statements: “Does he have a heart?” “How does he move?” “What does he feel like?” Then Biedscheid dug in – literally into the dirt that is – and placed a worm in front of each tiny scientist to study. 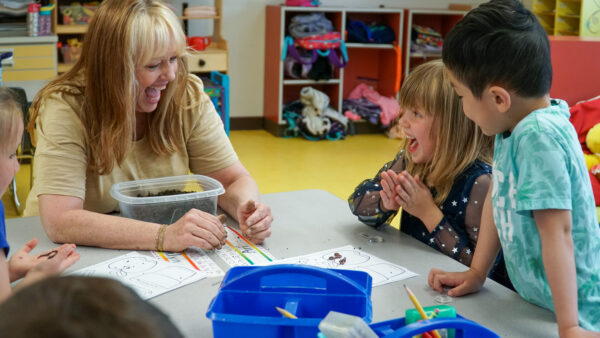 “They’re so wiggly!” one student said, giggling. “We should name them,” another declared.

Reflecting on her 37 years of teaching at many grade levels, Biedscheid said there’s something uniquely special about kindergarteners.

“They’re very ready to soak everything in,” she said, and that hunger for learning makes a huge difference in kindergarten teachers’ ability to “stretch them and make them really think.”

“They come in saying sounds and leave doing this,” she said of reading, pulling two example books off a shelf decorated with stuffed book characters like Pete the Cat and Maisy Mouse.

Asked what she wants parents to know about kindergarten in Poudre School District, she said: “We have ways to reach every child who’s here, meeting them where they’re at.”

Melissa Duve, principal at Rice Elementary School in Wellington, believes the same, adding that the quote “Everything you need to know in life you learn in kindergarten” is true, even though it’s a cliché.

Kindergarten lays the foundation for students’ academic careers. They play, socialize, learn how to be learners, gain independence, practice making mistakes, and develop friendships. School is a place where students are safe and loved, Duve said.

“They soak everything up and being in a school environment helps them throughout the school year” and beyond, she said. 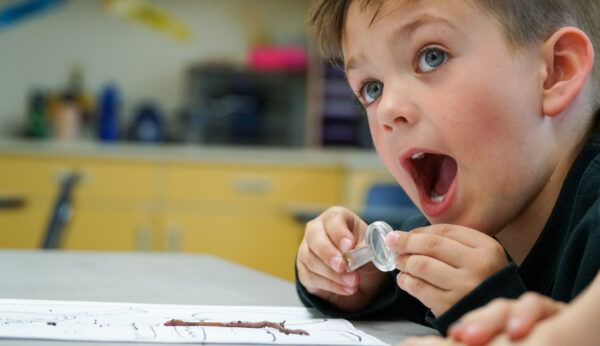 After careful hands-on analysis that involved miniature magnifying glasses, the kindergarteners discussed their findings while the worms took a break. They discovered that worms move through dirt using segments of their bodies. It was a concept they came to understand after Biedscheid made an expert adjustment on the fly, lining them up as a human worm so they could test their wriggling abilities around the room.

“We just solved this ‘I wonder,’” she said, circling their original question on the whiteboard and eventually bringing the lesson to a close so the kids could get to their specials class. Before they left, she reminded them of their upcoming field trip to the Butterfly House at The Gardens on Spring Creek, which elicited cheers and excited chatter about wearing hand-sewn, sparkly wings that Biedscheid and one of the classroom parents made.

Biedscheid started her career in the 80s and said she is teaching harder material in kindergarten now than she used to in first grade. Each year she pushes a little more, and each year, her students rise to the challenge.

“I’ve got some little honeys who are going to change the world,” she said, a wide smile across her face.