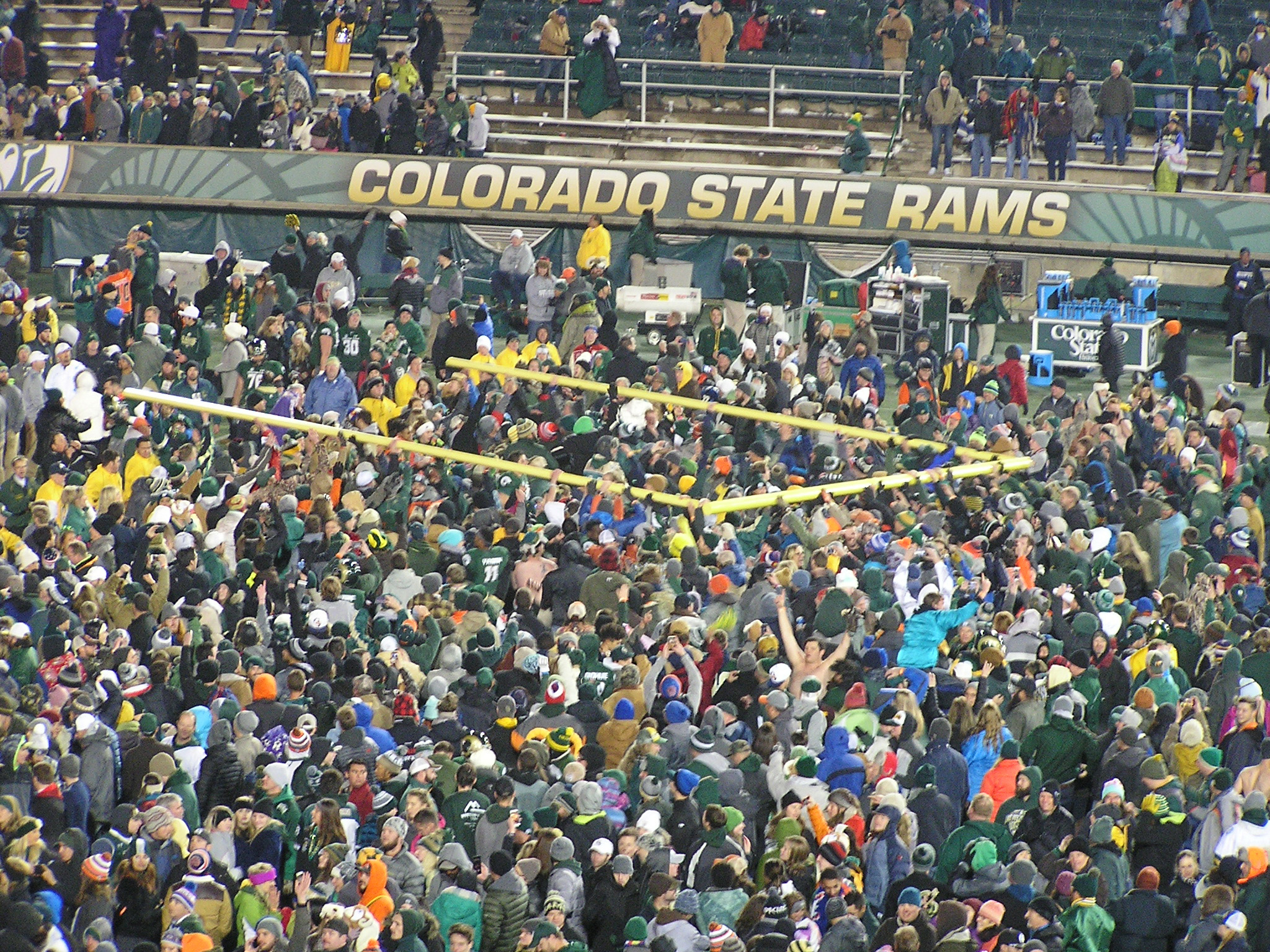 I’m more of a rock and roll guy than a sports guy, but I became a CSU Rams Football fan from the very first time I went to a game. That was way back in the dim past of 2000.

A friend had tickets and I had not yet attended a Rams game. The deciding factor was that I moved into a neighborhood within walking distance of Hughes Stadium.

Nestled right up against the foothills, Hughes Stadium itself was a unique and even majestic spot highlighted by crisp air — sometimes REALLY crisp — and gorgeous sunsets. Walking there for the games was good exercise.

And sitting over in the general admission “student section” was the perfect way to feel involved in the pageantry of the whole thing.

Yeah, I’m talking about football, but also about all of the other things that go along with a college football game — the marching band, the cheerleaders, and the local flourishes like jangling your keys at kick-off and the cannon that boomed every time the team made a score.

My football friend and I saw many of the prime players in CSU Football history — Bradlee Van Pelt, Dexter Wynn, and Cecil Sapp. What a great combo — Van Pelt to Cecil the Diesel. Another great Rams combo was Caleb Hanie to Gartrell Johnson.

We watched many great games, then the final game under legendary coach Sonny Lubick. Then came the debuts of coaches Fairchild, McElwain, and Bobo and the final game at Hughes Stadium. All this is followed by the debut of the new campus stadium. The CSU Rams have had a laudable and colorful history overall.

This fall, of course, virus concerns have interrupted that history and the debut of new coach Addazio. It has also hit national news that the program has other issues to discuss. That’s not the story I’m writing about here, though it is important.

Instead, I am using this space to suggest a challenge to CSU Rams fans. That is, to “Remember the Rams” with your best memories and stories.

To throw down the gauntlet, I have posted 13 pieces of CSU Rams history on YouTube. I often took my camera to games and have sifted the images down to brief slideshows. Included are CSU Rams games from 2005-2007, 2009-2012, and 2014-2018. Just look up “CSU Rams Football Photos by Tim Van Schmidt” for whatever season or my channel “Time Capsules by Tim Van Schmidt.”

As a bonus, I have also included a special release featuring my photos along with the original recording of my song, “Sonny Lubick’s Last Game” by TVS and two fingers. When it was released in 2007, it had the distinction of being used on Channel 9 Sports!

But I’m not asking you to pile comments on my videos. Instead, I simply want to challenge CSU Rams fans to use whatever social media they prefer and go ahead and talk top CSU Rams memories. I’ve tagged my videos with the phrase “Remember the Colorado State University Rams!” and that’s my only message.

What are your special memories of the CSU Rams? Put it on Facebook. Put it on Instagram. Put it on Youtube. Take the “Remember the Rams” Challenge today.

by Senior Helpers of Northern Colorado - 2 months ago