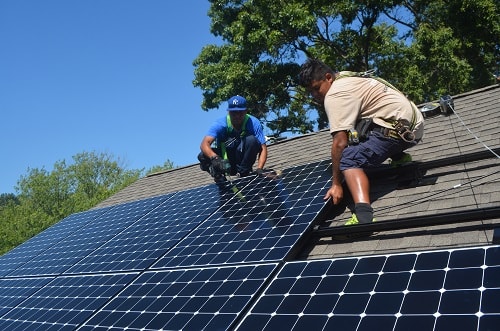 The Fort Collins Solar Co-op has selected REenergizeCO to install solar panels for the growing 65-member group. Co-op members selected REenergizeCO through a competitive bidding process over four other firms. The group will hold its next public information session (details below) to educate the community about solar and the co-op process.

“It is an honor to be selected because we know how thoroughly they reviewed each bid,” said Matt Scherer, COO of REenergizeCO. “We are excited to help Fort Collins residents save money and our environment by providing a quality solar solution at a very attractive price.”

Solar United Neighbors expands access to solar by educating people about the benefits of distributed solar energy, helping them organize group solar installations, and strengthening solar policies and the community of solar supporters.

“We spent hours sifting through the data and we found a company with the best cost, warranties, and community programs,” said Matt Clark, a selection committee member.

The solar co-op is free to join and joining the co-op is not a commitment to purchase panels. REenergizeCO will provide each co-op participant with an individualized proposal based on the group rate. By going solar as a group and choosing a single installer, participants can save on the cost of going solar and have the support of fellow group participants and solar experts at Solar United Neighbors.

“We’re excited to be partnering with Solar United Neighbors to help drive Colorado’s clean energy economy forward while seeing meaningful impacts in our community from empowering women in the energy value chain to increased installation of solar,” said Ellie Troxell of Colorado C3E.

Solar United Neighbors supports solar co-ops across the country. These co-ops are a part of the organization’s mission to create a new energy system with rooftop solar as the cornerstone. Solar United Neighbors holds events and education programs to help people become informed solar consumers, maximize the value of their solar investment and advocate for fair solar policies. Those interested in supporting the organizations’ work and becoming a member can do so at their website.

The co-op is open to new participants until July 1. Fort Collins residents interested in joining the co-op can sign up at www.solarunitedneighbors.org/fortcollins.

by Sparge Brewing - 18 hours ago