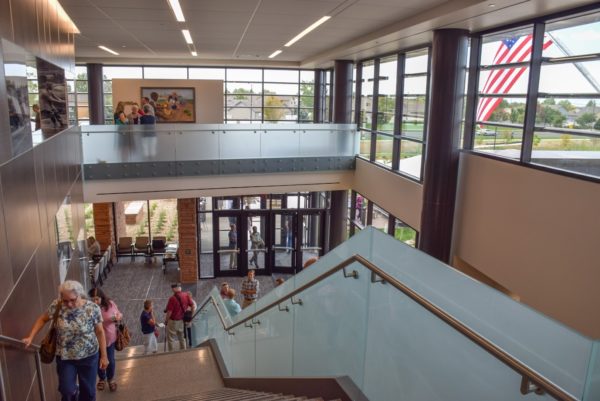 After being under construction for two years, it’s done. The completion of the new Larimer County Loveland Campus was celebrated at a ribbon-cutting ceremony on Sept. 11th. The ceremony was attended by those from the community and by local, state and federal government representatives.

The 46,000-square-foot facility located at First Street and Denver Avenue opens to the public on Sept. 25th and includes the Larimer County Clerk, Health, Human Services, Workforce Center, and Sheriff’s Office. The $9.5 million building was built with no public debt and was finished $1.3 million under the original budgeted cost, with funds Larimer County saved from a previous voter-approved tax to replace the aging, smaller county building in downtown Loveland.

The new building will have ample parking, which was a constant challenge for patrons at the downtown location. There are also two electric charging stations for those with electric vehicles.

Visitors will be greeted by features connecting the present to the past. Two locally-produced bronze sculptures from Loveland artist Jane DeDecker, “Mariano and Princess Namaqua,” and “My Heart is in Your Hands,” enhance the front entrance. Mariano Media was one of Loveland’s first settlers, fur trader, and army scout. He settled along the Big Thomson Creek in the mid-1800s.

Medina’s oldest daughter Marcellina had exceptional horse skills that made her legendary, often entertaining many in the area, wearing a hand-made Indian costume sewn together by her Arapahoe Indian mother, Tacanecy. The sculpture shows Marcellina on her pony, with her stirrup being adjusted on her new saddle by Medina. DeDecker’s second sculpture, “My Heart is in Your Hands,” depicts two people holding hands and forming the shape of a heart, another connection to Loveland, affectionately known as the Sweetheart City.

Red horizontal bricks which decorate the front lobby entrance were repurposed from the original 1950s Larimer County Courthouse in Fort Collins, and the last of the bricks from that building that were saved. The same bricks are also part of the interior walls in the entrance to the Budweiser Events Center, and lower outside walls of the current Larimer County Courthouse Offices Building in Fort Collins.