Mountain lion management in Colorado gets more challenging as the state’s human population continues to grow, but ground-breaking studies by Colorado Parks and Wildlife’s mammals’ research unit has generated new science that may help balance that growth with wildlife habitat needs.

Over the past 18 years, Colorado Parks & Wildlife has invested in an unparalleled research effort to learn about mountain lion populations and how these animals use the landscape. Particular focus has been on the spaces that we share with these magnificent animals. The areas where houses buck up against the foothills, mountain towns, and backcountry usage. After all, other than humans, mountain lions are the most widely distributed mammal in the Western Hemisphere. 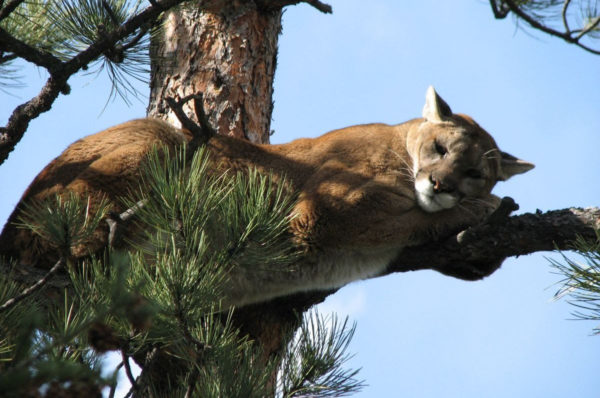 The need for this research began when CPW started receiving more calls about mountain lions in the early 2000s – a lion was in somebody’s backyard or had killed a pet or was sighted on a trail. Attacks on humans are historically rare, with just 12 reported incidences from 1990 through 2002. Among those were two confirmed fatalities, one in 1991 in Idaho Springs and later in 1997 in Rocky Mountain National Park. So, as the state’s leading agency on wildlife management, CPW set out to study human-lion interactions and what lions were doing in and adjacent to urban areas.

Since 2002, CPW has already completed two 10-year mountain lion studies. One was by Ken Logan, centered on examining effects of hunting on lion structure (age, gender, territories) and developing tools wildlife managers can use to estimate lion population numbers on the Uncompahgre Plateau (UP) in Western Colorado. Then Mat Alldredge, from 2005-15, looked at mountain lion populations and human interactions along the interface of the foothills and towns of the northern Front Range corridor (Boulder and Jefferson Counties). 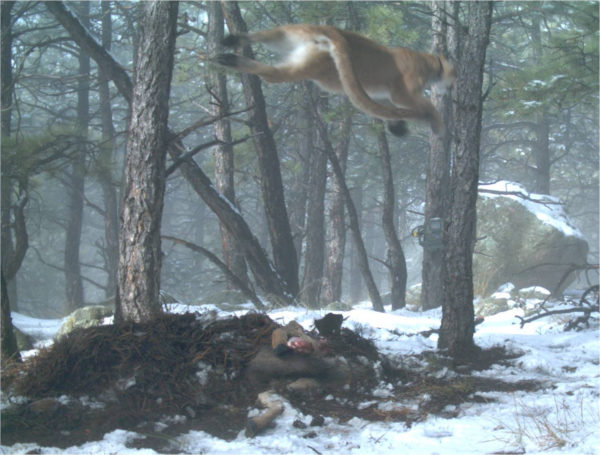 Alldredge is currently undertaking a nine-year mountain lion study in the Arkansas River basin looking at the relationship between lions and deer, the inner workings of mountain lion populations and how hunter harvest can factor into lion dispersal. The spatial extent of that study is massive, covering an area of well over 10,000 square kilometers. Other products of the work will look at harvest strategies and any relationships to conflicts, infanticide (killing of young by a mature lion), game damage and more.

All three studies have been on a scale and of a duration unheard of when it comes to mountain lion research. The scientific understanding of these animals allows the agency to lead efforts in wildlife management, habitat conservation and provide sound recommendations to cities and counties undergoing planning development for population growth.

“I’d say since 2002, Ken has done a 10-year study, I’ve done a 10-plus year study and now I’m in the middle of a nine-year study, so in the last 18 years, we’ve done over 20 years of research on lions and that is a pretty big investment,” Alldredge said. “I don’t know of any other state that has had three dedicated long-term mountain lion researchers, so I’d say we are kind of leading the country now on lion research because of the duration and the scale we are doing these on.”

“The magnitude and scale of the research that we are conducting on mountain lions, and the data we have gathered from our efforts, has led to interesting results that enhance our understanding of mountain lion ecology to better inform management decisions,” Anderson said. “That is especially true in our urban wildlife interfaces. The data being gathered will be critically important to us as we look to balance growing human populations with wildlife/habitat needs.”

CPW’s use of new technologies has led to the collection of data that had not been previously known, anywhere.

For Alldredge’s human-lion interaction study along the Front Range, he incorporated the use of satellite GPS collars to track the movements of 102 independent lions (lions without young, broken down to 50 females, 52 males) in addition to 16 cubs that were monitored during the study.

These collars allowed Alldredge to understand the basic structure of the populations, lion movement patterns, habitat use, predator-prey interactions, relocation distance and aided in population estimates. He collected over half a million data points on these lions, and in his career, Alldredge has captured and handled over 300 mountain lions and monitored over 200 individual ones with GPS collars.

“I think we just happened to hit it right when the technology was coming online to use,” Alldredge said. “The first year of the (Front Range) study, we were actually using store-on-board GPS collars, just because the satellite wasn’t quite there yet. So to actually get the data, we had to get close to a lion with an antenna and we could transfer the information that way, but it was a nightmare to get. You had to be so close and sit there for 5-10 minutes to get all of that data to come through. It was in the second year of the study that the satellite technology started becoming available and I just happened to jump on the bandwagon on that one and it has been great for lions.”

The advancement in technology allowed new insight into when and why mountain lions were coming into town. He found that most of them were coming into town at night, and springtime was the peak season for lions to use urban areas. Also, the majority of these lions were either young sub-adults who briefly passed through or adult females, who used it consistently for food. Our urban areas are great habitat for both deer and the smaller critters that a lion would eat like raccoons, in addition to pets and livestock. But by-and-large, Alldredge found they were primarily selecting deer and smaller prey items as their main food source, as we would like them to.

This area was selected for the study because it had a high number of conflicts but was also an area with one of the lowest hunter harvests because of inaccessible private lands.

Nearly 20 publications have come out of Alldredge’s Front Range study and six students (either funded by CPW or by the counties) were able to obtain their master’s or doctorate degrees by working on the project.

Now the question is what comes next in our mountain lion research?

Technology will make up a big component of the latest study. Researchers will be using satellite GPS collars once again, but Alldredge and his field crews will be including video cameras on these collars as well. Think of them like a body camera, or GoPro, that a police officer wears on duty.

Alldredge came up with the idea of using an accelerometer to trigger the camera. They are set to take a still picture every so often during the day, set to take a video clip at a certain time and he also tied the video to the accelerometers, so when that spikes, they are supposed to get a 30-second video clip.

“Nobody knows how often lions try to make a kill and fail,” Alldredge said. “I would guess they don’t fail very much just knowing lions, I would think generally they are successful when they try, but we don’t know.

“I think it is going to be an interesting piece of data. One of the lions we actually put a camera on was a year-and-a-half old male that still was with its family group, so the interactions there will be interesting. Interactions with other lions, it will give us a glimpse of things nobody has ever seen before. I am excited to see what is on there.”

Living in a Wildfire Prone Landscape: Collaborating Across Boundaries for Watershed Benefits

July 14, 2018 admin Columns Comments Off on Living in a Wildfire Prone Landscape: Collaborating Across Boundaries for Watershed Benefits

By The Coalition for the Poudre River Watershed The Poudre headwaters are amazing – there are vast swaths of forests and rivers that we all enjoy for recreation and living. It provides beautiful habitat for […]

Travis Duncan CPW Statewide DENVER, Colo. – Customers who need to cancel their campground reservations at a Colorado state park can now do so online at cpwshop.com or at 1-800-244-5613 at any time prior to or during […]

Travis Duncan, CPW Statewide DENVER, Colo. – Starting in 2019, it will be easier than ever for campers to reserve a campsite at 20 of Colorado’s state parks. Effective Jan. 1, 15 state parks will […]