Colorado Parks and Wildlife officials are receiving reports of injured birds of prey being turned over to local wildlife rehabilitators for care, the injuries coming from being shot by pellet guns.

Birds of prey can be eagles, hawks, falcons or owls. These birds of prey are often reported as being unable to fly after being on the ground for several hours or holding their wings in odd angles. When the birds have been caught and examined, it is determined that these birds have been shot with pellet rifles. The pellet is sometimes still embedded in the bird and occasionally multiple pellets have been found inside the birds. These injuries can prevent these birds from being able to fly, hunt and get food. 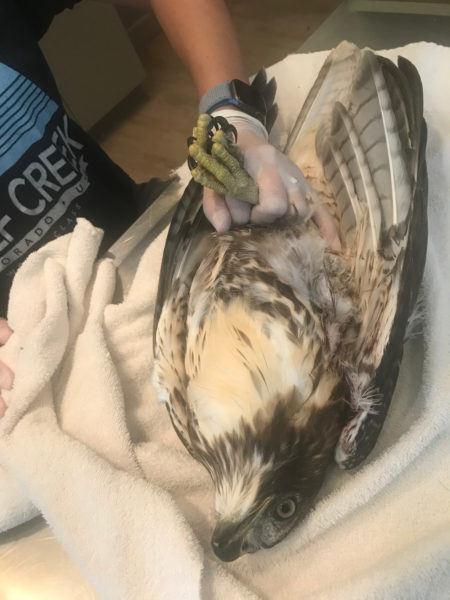 “It is illegal to shoot or kill birds of prey and other protected species,” said CPW District Wildlife Officer Jordan Likes.

Birds of prey are protected on both the state and federal level. Colorado Parks and Wildlife classifies all birds of prey as non-game species, meaning that the birds cannot be taken, possessed, attempt to be taken or harmed. Birds of prey can only be possessed in the state of Colorado under very specific licenses.

United States Fish and Wildlife Service protects birds of prey under the Migratory Bird Treaty Act or the Bald and Golden Eagle Protection Act. Some birds of prey in Colorado are listed as either threatened or endangered by CPW and by the USFWS under the Endangered Species Act.

The Birds of Prey Foundation in Broomfield has admitted 11 birds in less than five months that were confirmed to have been shot, and that number does not include the many raptors admitted with injuries suspected to be a result of being shot.

“Pellets cause significant trauma for birds of prey and may even result in death,” said Desirae Kovacich, ICU Manager at Birds of Prey. “Common injuries these birds suffer include fractures, open wounds, and lead toxicity. Fractures, either from the projectiles themselves or from falls that happen after being shot, take a minimum of two weeks to completely heal. This does not include the time these birds need to regain the strength and endurance necessary for release.

“Open wounds, which can be difficult to find under thick layers of feathers, must be cleaned out thoroughly and often more than once as feathers and other debris gets pushed into the body as the pellet enters. These foreign objects are likely to cause infection, so antibiotics are usually necessary. Shot birds must also be monitored for lead toxicity if pellets remain in the bird’s body. This requires multiple blood draws and treatments using very strong medications. A single pellet, or even a fragment, can elevate lead levels in raptors enough to result in death.”

Kovacich added that “As more birds are suspected of being shot, our protocols are changing to include obtaining an x-ray for every admission. This is a daunting task as we admit between 700 and 800 birds every year. The average cost to rehabilitate a single raptor varies but is typically $400-800. Birds that have been shot and survive tend to cost more because intensive treatment and longer stays are often necessary. Accidents are inevitable – birds run into windows, get hit by cars, are trapped in warehouses and more. Intentionally shooting a bird of prey is completely unnecessary.”

For further guidance or assistance on preventing conflicts with birds of prey, or questions on wildlife matters in general, please contact your local CPW office or call CPW’s Denver office at 303-291-7227 during normal business hours.

Additional information can also be found on CPW’s website at www.cpw.state.co.us.