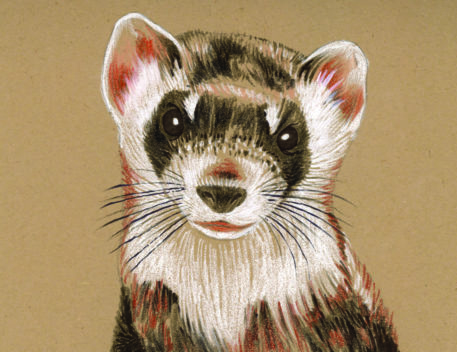 Labels affixed to the animals’ cages bore numbers identifying them: A studbook number and a tag number. The studbook number, as one might surmise, reveals their carefully monitored breeding history. In 1979, scientists thought this species of ferret, whose diet is 90% prairie dog, had gone the way of the dodo and the passenger pigeon. A Wyoming ranch dog named Shep proved them wrong in 1981 when he deposited a furry trophy on his owner’s doorstep. Scientists recovered a remnant population of 130 ferrets, but that population suffered an attack of sylvatic plague that ultimately reduced the species to 18 individuals. Fifteen of these animals mated, but only seven actually constituted the founder population for the resurrected species. Careful breeding records became crucial.

The tag number identifies animals recaptured in the wild. Each released animal is chipped so they can be identified. But ferrets hunt in the dark and are hard to find. Night surveys sometimes reveal their eyes glowing uniquely green, prowling about for an unsuspecting prairie dog napping in her burrow.

Jingle scooted into one prairie dog hole and stayed there, perhaps happy to get out of a chill wind. Several prairie dog mounds away, Elfie wasn’t quite sure of the plan. She entered the hole; ducked in and out a few times, sometimes stretching her full weasel length to look around. At one point she scurried around the feet of several of us, looking up as if to say, “You’re really going to leave me here?” Finally, she entered the prairie dog burrow and stayed. Her heritage, which stretched back to a time when mammoths hulked over prairies chilled by glacial winds, must have whispered the truth: This was home.

On a hike across Soapstone recently, one person asked me, “Since there is so little prairie left, does it make sense to spend the time and effort to rescue the black-footed ferret?” Did he have a point? It’s true that open prairie once covered 25% of the continental U.S. and now covers just 1%. But that one percent provides plenty of space for ferrets, and, moreover, ferrets are a bit like canaries in a coal mine. When ferrets thrive, you can be sure that the vast network of animals, plants, and microbes that constitute a healthy prairie are also alive and well. For an interesting interview with Pete Gober, the head of the Black-footed Ferret Conservation Center, see https://www.youtube.com/watch?v=427e8VOLcMg.

I asked Tina Jackson this question as well. “For me,” she said, “ferrets are important to conserve because they are a native species that is meant to live in our prairie habitats, and by conserving ferrets we are also conserving those important areas as well as the other prairie species. Black-footed ferrets are also the only species in that genus that is native to North America. Finally, and this one is big for me, the reasons that ferrets declined (plague, loss of habitat) are human-caused and I think it is important that we as a species not cause the loss of other species.”

Looking at the uniformity of human genetics and extrapolating back in time based on mutation rates in our genome, scientists tell us that our human species also survived an extinction crisis about 70,000 years ago. Our founding population then could have fit easily in one football stadium today. Perhaps we are primed to sympathize with another predator, shaped by ice and time, and teetering on the edge of survival.

The Black-Footed Ferret: Flagship Species for the Prairie Ecosystem