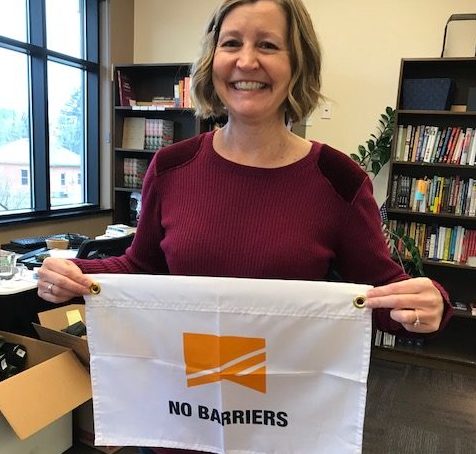 Eleven miles into a 12-mile hike in the Gila Wilderness in New Mexico, Dave Inbody’s prosthetic leg was suddenly kaput. It had supported him faithfully for a long time until the day when it simply gave out from overuse. A veteran of the war in Afghanistan, Inbody’s foot had been injured so severely by an IED explosion that it had to be amputated. On this day in the Gila Wilderness, he was part of a group that was training to lead outdoor expeditions for the No Barriers organization. Fitted with a carbon fiber and stainless steel prosthesis, Inbody had hiked for hundred of miles on it without a problem.

But on this hike, which included 25 river crossings, the leg gave out, leaving Inbody with one leg shorter by three inches minus a foot. He sat on the side of the trail, pondering his situation as the temperature began to drop and snow flurries appeared. It was time to finish this hike and make camp. Some of the group hiked ahead to do that.

The others, left with a problem to solve, moved into what they call the “pioneer mode.” Working as a team and making use of the few items they had on hand, they created a workable limb using some cord to make a stirrup, tape, and part of a flip-flop to serve as a fake foot. Inbody not only finished the day’s hike, he completed the expedition the next day. It took six river crossings, a climb out of Hells Hole Canyon, and another five miles on foot before the group reached their van. They emerged with a strengthened bond between them and added respect for Inbody.

In some ways, the incident was all in a day’s work for No Barriers, a worldwide non-profit based in Fort Collins that provides outdoor experiences for youth, veterans, and children and adults with disabilities. They operate on the premise that getting people out of their comfort zone can shift the lens through which they see the world and lead to a new and richer life for them and the world around them.

The No Barriers offices in downtown Fort Collins buzz with activity. It takes a staff of 35 to make their wide range of expeditions a reality and to plan for future growth.

The organization has existed in its present form for only five years. The organization grew out of the merger of two like-minded entities. The original No Barriers, formed in 2005, was a small non-profit with a single staff member, founded by Erik Weihenmayer, the first blind person to summit Mount Everest. A visionary with a mission to help others conquer obstacles in their lives, he has also summited the highest peak on every continent and kayaked the length of the Colorado River.

When Weihenmayer and Dave Shurna and Julie Ivker Dubin, co-founders of Global Explorers, met at a Leading the Way youth conference, they were so drawn to each other that they decided to join forces. Global Explorers was already well established in the business of organizing and leading youth trips around the world. No Barriers grew exponentially when the organizations merged. Today, Shurna is executive director and Dubin is director of youth programs for No Barriers.

The core of the present-day organization revolves around life elements identified by Weihenmayer. They are: vision (defining a purpose); reach (beyond one’s comfort zone); pioneer (persevere); alchemy (harness life experiences into optimism); summits (gifts earned through struggle); and elevate (impact the world as a leader who serves).

No Barriers has kept a low profile in Fort Collins, going about the business of changing lives in a quiet way. “Right now we are poised to explode,” said Andrea Delorey, education director for No Barriers. “We’re moving up to a new level.”

A social studies facilitator and later an assistant principal in Poudre School District, Delorey was so impressed with No Barriers that she saw an opportunity and accepted a challenge. She served as youth program director for two years before becoming education director. Her responsibilities include curriculum development, creating educational content for programs, and developing an online platform geared to serving a 30- to 50-year-old audience.

She explained that the company seeks corporate sponsorships, grants and help from private donors to keep their programs afloat. Some participants pay a fee for service but scholarships and a sliding scale are also available.

Every experience has three phases. Before they travel, students are presented with a curriculum addressing global issues as they relate to their destination and are asked to consider possible solutions. During their time on the expedition, they experience cultural interaction as they work on designated service projects. Back home, they are encouraged to integrate their experience into their lives by engaging in on-going service with an emphasis on community-building.

Every year, No Barriers sponsors a “summit event,” usually in a mountain setting. In a departure from the past, this year’s event will be held in New York City. The retired naval ship The Intrepid, anchored in Manhattan harbor, will be the scene of workshops, speeches and variety of activities and entertainment. The annual event has become a highlight for the organization.

This summer, Delorey will be part of an expedition to Nepal where she will have a chance to see the educational programs has developed in action.