January marks one big step for our northern Colorado community and one even bigger step for commuters as the Poudre Express bus service connects Greeley, Windsor, and Fort Collins. 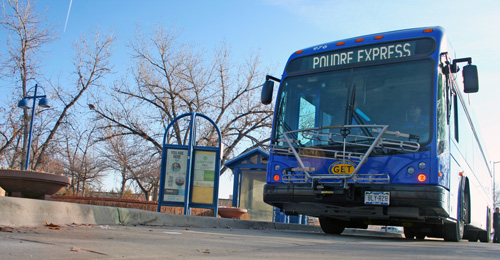 By working together, organizations across northern Colorado can offer commuters a chance to step out of the driver’s seat and catch a bus between these northern cities Monday through Friday.

For the entire month of January, the Poudre Express will be free to anyone who wants to ride and try out the new commuter service. After the free month ends, the regional route will cost $1.50 a trip. Monthly and annual passes are also available.

Nearly 15,000 people make the daily commute between these three communities, including the almost 3,000 faculty and students that travel between Aims, Front Range Community College, UNC, and CSU. 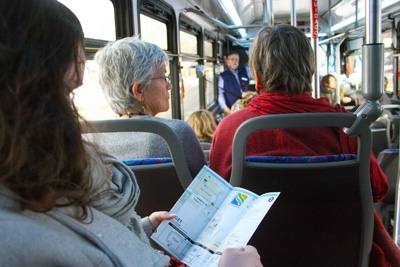 Based on information about all those commuters, our transit experts set the initial schedule and route times to serve the largest number of commuters. During the week, the Poudre Express will operate four runs in the morning and three in the afternoon and evening to accommodate varying work schedules.

The Poudre Express offers free Wi-Fi, allowing riders to relax, read, watch, listen, learn, or even work while they ride.

Starting in Greeley at the Greeley-Evans Transit Center and in Fort Collins at the Colorado State University Transit Center, the Poudre Express offers a one-seat ride for the thousands of people who commute between Fort Collins, Windsor, and Greeley.

A big “thank you” to Fort Collins, Windsor, Colorado State University, and the Colorado Department of Transportation who partnered with the City of Greeley to make it possible for Greeley-Evans Transit to operate the Poudre Express.

Look at a route, find your closest stop, see what times might work best for you, and learn more at greeleyevanstransit.com/regional.

by Reloading Experience LLC - 3 weeks ago

by tusk horn trail - 3 weeks ago

by Reloading Experience LLC - 3 weeks ago

by tusk horn trail - 3 weeks ago

by Level Up Financial Planning, LLC - 7 months ago

by Cursor Magnet - 9 months ago

by Senior Helpers of Northern Colorado - 9 months ago

by Andora Cleaning - 11 months ago

by Level Up Financial Planning, LLC - 7 months ago