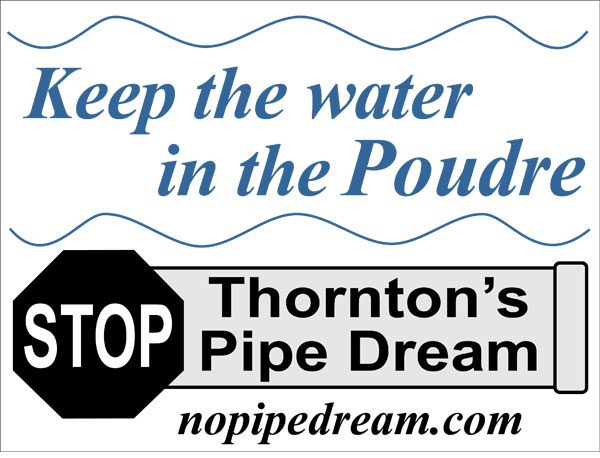 Fort Collins, CO January, 2018 –  The grassroots community group, No Pipe Dream, is holding a public meeting to formally protest the City of Thornton’s bid to build a pipeline under or alongside a nearby county road.

The City of Thornton recently submitted a 1041 proposal to Larimer County to use Douglas Road, just north of Fort Collins, as the route for the first part of its planned 70-mile pipeline to carry Poudre River water purchased in the 1980s to their community near Denver. Neighbors of Douglas Road, along with advocates for the Poudre River, have teamed up to protest the proposed route and ask the Larimer County Commissioners to reject Thornton’s 1041 application.

No Pipe Dream invites the public to join them in their efforts for a peaceful rally meeting Tuesday, January 16, from 6 – 8 pm. The meeting will be held in the Hearing Room at the Larimer County Courthouse, 200 W. Oak Street, Fort Collins.

The City of Thornton won the right to transport their purchased water, but the route has been debated. No Pipe Dream members, hundreds strong, are asking the City of Thornton to be respectful of their property and peaceful way of life, and do the right thing for the Poudre River by leaving the water in the river through town to a takeout point south of town, near Windsor.

Building the pipeline under or along Douglas Road would mean tearing up the road and taking adjacent private property by eminent domain for an expanded easement. Subsequently, it would devalue nearby properties and create large scale, protracted disruption of neighborhoods. It would also include the placement of a large pump station near Starlite Drive and Douglas Road to force water over substantial hills on Douglas Road. The proposed route would traverse a mobile home park, wetlands and come within a mile of a protected migratory bird nesting site, and a pair of nesting bald eagles.

“Building the pipeline would directly affect 300+ homes with single-entry access off of Douglas Road, and 1000s of others who use Douglas Road to commute to town. Whereas leaving water in the Poudre would improve the health of the river and enhance wetlands and recreation areas alongside it—including the proposed whitewater park and River Park in downtown Fort Collins,” said Lynn U. Nichols, a No Pipe Dream member.

GIVE NEXT STUDENTS CELEBRATE A YEAR OF TRANSFORMATIVE LEARNING

June 10, 2019 admin Life in NOCO Comments Off on GIVE NEXT STUDENTS CELEBRATE A YEAR OF TRANSFORMATIVE LEARNING

Theresa Rose In front of a heavily packed courtroom, Larimer County Commissioners Lew Gaiter, Steve Johnson and Tom Donnelly announced that if the hearing was to continue past 10:00 pm, the final decision would be […]

The City of Thornton continues its appeal for water

If Thornton officials thought they got pushed back on their initial plans to pipe water from the Poudre River out through the area, they didn’t get much more of a welcome from county commissioners […]