The 69-year-old male pilot of the downed aircraft walked away from the crash but was transported to Poudre Valley Hospital with minor injuries. 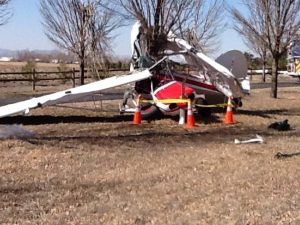 The pilot was attempting to land the plane on an unpaved airstrip on his own property but decided at the last minute to make another approach. As he was trying to gain altitude to attempt another landing, he hit some trees causing the plane to crash.

Poudre Fire Authority’s prompt response helped prevent a fire as they controlled the fuel leaking from the plane.

The National Transportation Safety Board was notified of the incident.

On Oct. 26 from 10 a.m. to 2 p.m. local law enforcement and the U.S. Drug Enforcement Administration (DEA) will give the public another opportunity to properly dispose of unused, unneeded and expired prescription medications […]

So you haven't planted your garden yet?

June 14, 2013 Libby James Uncategorized Comments Off on So you haven't planted your garden yet?

It’s July, and you haven’t had time to plant your garden yet? Scott Swartzendruber of Fort Collins Nursery hasn’t planted yet either. He’s been too busy at his job. “It happens every year,” he said. […]

Wellington Fire Chief Gary Green anticipates the traditional fireworks display in Wellington will happen, as long as the weather cooperates. Members of the fire department will ignite the display on property on County Road 7 […]