Ron and Marie Schmidt were among the first in their area to pack up their valuables and get ready to leave their 35 acres of mountain hillside near Glacier View Meadows last June.

“We saw the first evidence of High Park Fire on our way home from the wool fest in Estes Park,” Ron said. “It looked to me like the fire was in Poudre Canyon, and I knew if it jumped north, it would be in our back yard.” 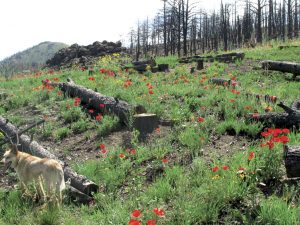 The Schmidts raise sheep and process and dye wool, and Marie uses her needle felting skills to create much-in-demand figures. Well before they received notice to evacuate, they went to Loveland to stay with friends. During the time when they could still visit their property, they moved their sheep to town and managed to retrieve the wool stored in their basement.

As flames raged across their land, firefighters reported their home had been lost. Later, when the smoke cleared, the Schmidts learned that although the land surrounding the home they built 13 years ago was blackened and more than 1,300 trees had burned, their home remained standing. Schmidt said their sheep that function as efficient lawn mowers for a 50-foot swath surrounding their house saved it from cremation.

But the heat damage their house suffered required all new windows and doors, a new paint for every room, and endless hours of scrubbing and cleaning to remove a weird residue that covered everything. The rest of the land they love so much was devastated. Every rock and tree stood blackened and covered with layers of ash. Lush green groves of trees where they liked to picnic were gone.

“It’s part of a cycle,” Schmidt says of the fire.

Schmidt doesn’t feel like a victim and he’s happy he is able to participate in doing everything possible to restore the land. He and Marie lost no time in setting to work. But they are far from finished.

They learned lots and received some financial assistance from the Natural Resources Conservation Service, a part of the U.S. Department of Agriculture. In order to receive funds, they had to follow specific guidelines. Using a combination of natural grasses and a “quick-guard” seed that germinates quickly and then disappears, they replanted their pasture last fall and saw good results this spring.

NRCS provided some funds for weed control and for building check dams to prevent erosion. They also provided some help with the cutting down and placing of burned trees crosswise on the hillside to help with erosion. The Schmidts used chunks of concrete foundation from a neighbor’s house that burned to create two check dams to divert water flowing down the hillside and carrying soil with it.

As the burned trees came down, Schmidt made sure he left stumps to provide some protection for the 600 new trees he and Marie planted last April. By the end of July all but about 10 of were alive, carefully marked with tiny different colored flags to indicate their species — bristlecone, pinion, Douglas fir, juniper and native ponderosa, which are doing especially well.

John Beckett, the Schmidts neighbor and owner of Custom Design Fabricating, assisted with advice, tree cutting, dam construction and chipping piles and piles of slash to spread on the hillside to serve as mulch for tiny new plants. Seeing the handwriting on the wall, Schmidt has now purchased his own chipper which he can drag with his tractor to places where work must be done.

The Colorado Forest Service assisted the Schmidts by providing money for trees through a program that encourages fire survivors to replant on privately owned land.

It’s working. Grasses blow in the breeze. Red, yellow, blue and orange wildflowers carpet the hillside. The rocks aren’t as black as they once were, now that they’ve been through a winter and spring of snow and rain. Instead of becoming washouts, gullies protected by check dams, are collecting sediment and debris, already 4-feet deep in some places. And every little tree, encouraged by Ron Schmidt’s admonition to “grow big,” are on their way, one baby step at a time.

The six acres of land where the Schmidts have focused much of their effort lies several hundreds of yards from their house. They could easily have ignored its devastated condition and gone on about their daily lives. Both have jobs in Fort Collins, raise sheep, and own a menagerie of other animals.

“But this is our land,” Schmidt said, indicating the importance of helping the land to recover, preserving it and improving for now and for time to come.

There’s an eerie, barren sort of beauty to be seen as the vibrant wildflowers contrast with blackened logs, as the bare black trees that still stand provide a dappled bit of shade for the dark earth below. Fire will have its way. The passage of time will heal and enhance.

Ron and Marie Schmidt never, even for a moment, considered leaving their land. Gazing out their big new living room window, they will be there, patiently, gratefully watching nature do its transformative work.

On March 4, the Colorado Department of Transportation will begin a reconstruction and widening project on U.S. 287 near Livermore. Work will take place between mile marker (MM) 366.59 and MM 367.15. As part of […]

May 26, 2012 admin Uncategorized Comments Off on Vermicomposting: Worms are wonderful!

There’s no doubt about it. Worms are yucky! They’re squishy and slimy and ugly and better left in the ground where they belong. But what they can do for your soil is positively beautiful. Vermicomposting […]

The Colorado Department of Transportation, Colorado State Patrol and law enforcement agencies in 11 counties in Colorado will support the Click It or Ticket campaign to save lives by increasing seat belt use, particularly at […]