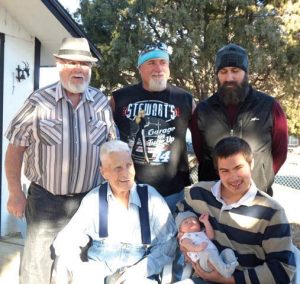 In 2012, when Paul Ridnour of Wellington was about to turn 96, Mad Jack Hanks wrote a column about him for The Fence Post. Hanks interviewed him as he rolled up to the Wellington Post Office on a scooter. Hanks had been observing Ridnour for years, trudging up and down the main street of Wellington. “No bigger than a whisper, but out in rain, snow or shine, looking in trash cans for anything of value,” wrote Hanks.

Noting the scooter, Hanks said, “Looks like ya got yourself a new motorcycle.”

“Well, I fell the other day, and I need a little help now cause I hurt myself a little.”

Then he gave Hanks a hardy handshake and said, “Well, I’m proud to meet ya. I wondered when I might ever run into ya. I read your column every week.”

Hanks replied, “Paul, you’re quite a fella.” He wondered if he, too, could live to be 96 and get around as well as Ridnour.

Today, Ridnour is 99 and still lives alone. He still walks around town but not as frequently as he used to. A few weeks ago, he had the pleasure of posing for a photograph with five generations of his offspring. Each is a first-born son as is Paul.

Wesley, 78, retired last year from his job as a North Poudre ditch rider. He likes to be called a “water distribution technician.”

Brian, 57, has Turf Master sod farms in Fort Collins and Wheatland, Wyo., where he lives. His wife, Jean, took the photo.

Jorden, 39, is business manager for the sod business and lives in Fort Collins.

Jayden, 19, lives in Wheatland and also works in the family business.

Ryder, 4 months, hasn’t yet decided on a career.

Paul Ridnour was 14 when he came west with his father. At that young age he began working for farmers and ranchers in the Buckeye area. Among other jobs, he worked at the Ideal Cement Plant in LaPorte for 30 years. He and his wife, Jennie Le Roy, whose parents had homesteaded in Buckeye, had 13 children, 12 of whom are still living. Two of the girls live in Wellington. Wes, the oldest of the 13, now 78, lives east and north of Fort Collins.

Paul has lived alone since Jennie died 10 years ago. For 10 years before that, he took care of her. Despite many years of illness and a two-year period when she was bedridden, she never went to a nursing home. Paul has seen a doctor only once in his life and has never been hospitalized. He’s an advocate of vitamins, takes no drugs, eats lots of beans and does not eat pork.

The North Forty News did its best to bring its readers a photo of voters doing their civic duty at the Larimer County polling place at River of Life Fellowship at 3161 E. County Rd. […]

Here it is July and the year is already half gone. Enjoy the summer. Here are some of the activities set for this month. By Maxine Griffin July 2: Membership meeting and celebration of July […]

Feeding a horse without breaking the bank

June 20, 2013 Libby James Uncategorized Comments Off on Feeding a horse without breaking the bank

Prices for hay and grain mixtures fed to horses have been on the rise for a long time, and since 2011 have doubled, and sometimes tripled in Northern Colorado. Local horse owners are coping as […]