Humans are good at looking up. Over time, we’ve learned a whole lot about the heavens. We’ve peered through telescopes, mapped, photographed and even visited up there, and we have plans to do much more.

We’re not as good at looking down. It’s safe to say that we have largely ignored terra firma. We seldom contemplate the material beneath our feet, its makeup, and its importance to our existence. 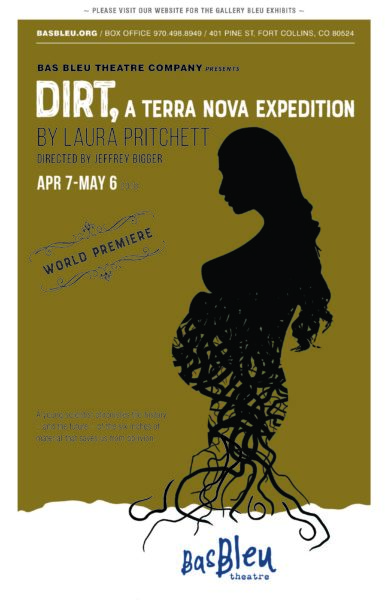 We call it dirt and we tend to discount it. Merriam-Webster calls it “something worthless, excrement, a filthy or soiling substance.”

Laura Pritchett, Fort Collins author with five novels, several nonfiction works and many national awards to her credit, has another relationship with the six inches of material under our feet that saves us from oblivion. Out of her love and respect for dirt and her concern for the well-being of the universe, she has written her first play.

“Dirt, A Terra Nova Expedition,” the first-ever play dealing with the topic of dirt, will debut April 7 at Bas Bleu Theatre, 401 Pine St. in Fort Collins, with shows Thursdays through Sundays through May 6. The play chronicles the history of dirt from creation stories to the Dust Bowl, from climate change to chemicals, from “singing” tree root microbes to “warrior” nematodes, from Lakota myth to future science.

Pritchett’s fascination with the soil grew from a personal experience involving an ailing septic tank on her property and some ailing bacteria in her gut. She was led to produce a small book of essays on dirt and eventually to write her first play in hopes of bringing to light the science of dirt in a new way.

Director Jeffrey Biggers brings his background as a sign language interpreter to his task of orchestrating a cast of actors and dancers playing multiple parts in settings above and below the ground.

The plot revolves around a pregnant young scientist left alone in a dismal underground setting, while her boyfriend has disappeared to the surface on an important mission. To maintain her sanity, she daydreams and hallucinates the history, culture and myths of the soil.

There are distinctly local references to agriculture, the sugar beet business in Northern Colorado, and the fact that augers for beet harvesting machines were manufactured in an earlier time in the Bas Bleu Theatre building.

When asked about what was most striking to her as she sees the play come to life during rehearsals, Pritchett said she appreciates how everyone works together.

“I know it’s a cliché to say this, but a play is a collaboration among many brilliant souls. From that, comes greater brilliance.  As a novelist, I’m used to working alone (and then with an editor). That is a very solitary experience, by necessity. This is a whole different beast, and I can’t wait to see what people do—everyone from the actors to dancers to lighting to set to directing.”

A series of “talkbacks” following the show will offer an opportunity to learn more about its unique subject matter:

Pritchett will moderate the first one on Sunday, April 8, when climate scientists and experts address “Cutting Edge Soil Science: What’s Up for the Future?”

On April 19, local farmers and community-supported agriculture people will present “Soil Under those Fingernails?” about locally grown food and history.

On April 26, the play is sold out, but the talkback that follows, “Life in Unexpected Places: Exploring the World beneath Our Feet,” is open to the public and features biologists and experts in soil and crop science and pest control.

Roamin’ the Range in November 2017

November 2, 2017 Libby James Entertainment Comments Off on Roamin’ the Range in November 2017

by Libby James North Forty News In a search for unique and fun things to do along the wide Colorado range during the month of thankfulness, we came up with some pretty special happenings. For […]

Excitement and Anticipation Abound! Fort Collins– The School of Music, Theatre and Dance at Colorado State University is proud to announce the return of the annual Holiday Spectacular at the University Center for the Arts. […]