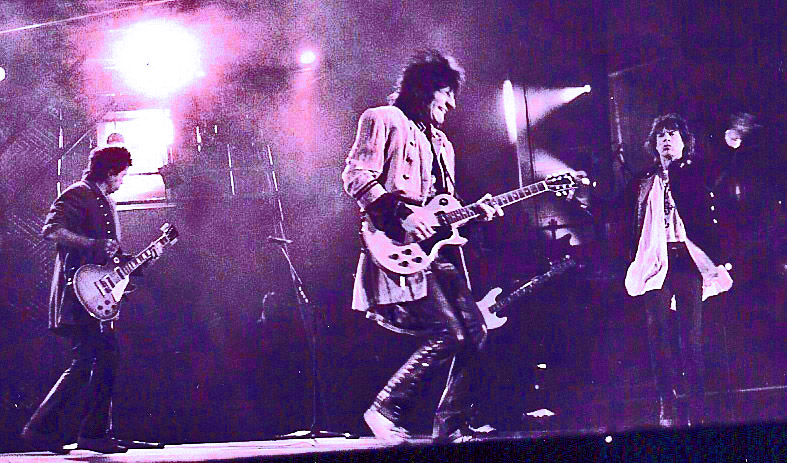 Recently, I’ve written articles about The Beatles and Bob Dylan, so I thought I would tie up a kind of “classic rock triptych” with a quick one about The Rolling Stones:

I wasn’t in Fort Collins to see The Rolling Stones when they played Moby Arena in 1969. At that time I was still living in Phoenix, singing in the church choir and going to Boy Scouts meetings. Really.

My first time seeing The Rolling Stones was in Los Angeles in 1972. It was exciting just getting the tickets. Outside the venue — the legendary Forum — evangelists warned of losing your soul to the devil Mick Jagger. Inside, you could hardly see across the arena due to a certain kind of smoke.

In 1972, The Stones were The Big Time– maybe The Biggest Time. They had just released “Exile on Main Street” and, with guitarist Mick Taylor, were perhaps at their musical best. They were the first band I saw with video screens, making them literally larger than life.

The Stones returned to Fort Collins in 1975, playing Hughes Stadium, and I wasn’t there either. Instead, I flew into Los Angeles, booked a two-night stay at a hotel across the street from The Forum, and saw the band play two nights out of a three-night stand.

In ’78 I saw them in Tucson, joined by special guest Linda Ronstadt on the tune “Tumbling Dice”. That sounds great, but to be honest, the band was sloppy and it had been a real hassle getting tickets. I wouldn’t return to see the Stones again for 16 years.

What turned the tide was the opportunity to photograph The Stones at Mile High Stadium in Denver in 1994 during their huge Voodoo Lounge tour. Who would turn down a Stones photo pass? It also was a hassle, but just an awesome experience to have Mick Jagger performing just a few feet away.

The real treat in 1994, and perhaps the best live show I ever saw by The Stones — next to that 1972 show, of course — was at the MGM Grand in Las Vegas only a few weeks after the Denver show. It was the only indoor venue on the tour, but they jammed their entire stage show into one end and rocked that relatively small arena — 13,000 seats — with the ferocity and intensity of their stadium shows.

There have been others, like the 2005 show at the Pepsi Center on a Thanksgiving Day. Not only did Jagger tell a bad, off-color joke about Thanksgiving, but part of the stage picked up and moved to the other end of the arena — while the band was playing on it.

In 2016, I caught Stones fever again with the release of their tough and gritty album of blues covers, “Blue and Lonesome”. It’s a rough and unrestrained collection of 12 tracks — their most recent studio album — that sounds more like an excellent, smoking bar band rather than rock and roll royalty with something to prove.

But I had to step back from seeing the Stones most recently. When the tickets went on sale for their 2019 show in Denver, I was confronted with a bewildering ticket selling system.

You couldn’t just buy a standard ticket at your chosen comfortable price range. Instead, tickets were not all offered at once, and tickets that had been purchased could be offered for sale at a price hike, turning the map of the stadium into an inscrutable mess with prices literally shifting every day according to demand. You should have seen prices tank when the show had to be postponed so Mick Jagger could have heart surgery, but they rose again quickly enough. But not for me — this kind of gold-digging just wasn’t what I wanted in a concert experience.

What’s going on with the band now? Well, they’ve released a new tune and video, “Living in a Ghost Town”, remastered “Goat’s Head Soup” and gone into retail. Now they have a walk-in shop on Carnaby Street in London. Since even “The Greatest Rock and Roll Band in the World” must step aside due to a worldwide pandemic, they probably figured they may as well sell some stuff — including Stones “lips and tongue” virus masks.

Tim Van Schmidt is a writer and photographer based in Fort Collins. See his tributes to The Rolling Stones, CSU Rams, Tour de Fat, The Lincoln Center, and more on YouTube at “Time Capsules by Tim Van Schmidt.”

by Sparge Brewing - 13 hours ago