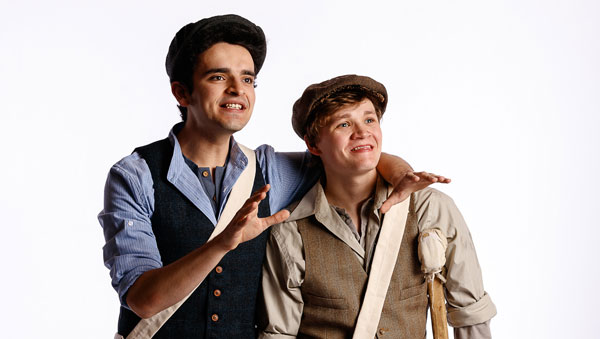 Johnstown, CO (CDP) Based on the 1993 Disney film of the same name, “Newsies” follows a group of Newsboys at the beginning of the 20th century who take on Pulitzer and the World Newspaper and win. The Newsies are led by a dreamer name Jack who falls in love with a young reporter named Katherine who may not be all she appears to be.

“Newsies” premiered on Broadway in 2012, starring Jeremy Jordan as Jack and Kara Lindsay as Katherine Plumber. With a book by Harvey Firestein, music by Alan Menken and lyrics by Jack Feldman, Newsies was nominated for eight Tony® Awards, including Best Musical.

The production received great acclaim from audiences and critics alike including a Tony® win for Outstanding Music for Alan Menken with songs such as “Santa Fe”, Seize the Day”, “King of New York,” among others.

Candlelight’s production of “Newsies” is directed by Pat Payne who is no stranger to Candlelight having directed such shows as 42nd St, Hello, Dolly!, Chitty Chitty Bang Bang, andHairspray to name a few. Choreographing this high energy dance show will be Matthew D. Peters, whose choreography has been seen all over Colorado including BDT Stage where he is currently Directing and Choreographing their upcoming production of The Little Mermaid.

Jack will be played by Candlelight newcomer Logan Traver, currently a junior at University of Northern Colorado, most recently seen as a disciple in Jesus Christ Superstar and Marcel inThe Boyfriend. Playing opposite Traver as Katherine will be Harmony Livingston, who was last seen as Lois in Kiss Me Kate at Candlelight; Ben Welch as Crutchie – Jack’s fellow Newsie who suffers from a limp; Kent Sugg as Pulitzer and Ben Griffin as Davey a new Newsie. Samantha Jo Staggs, who has been seen in many Candlelight shows, returns to play Vaudeville entertainer Medda Larkin.