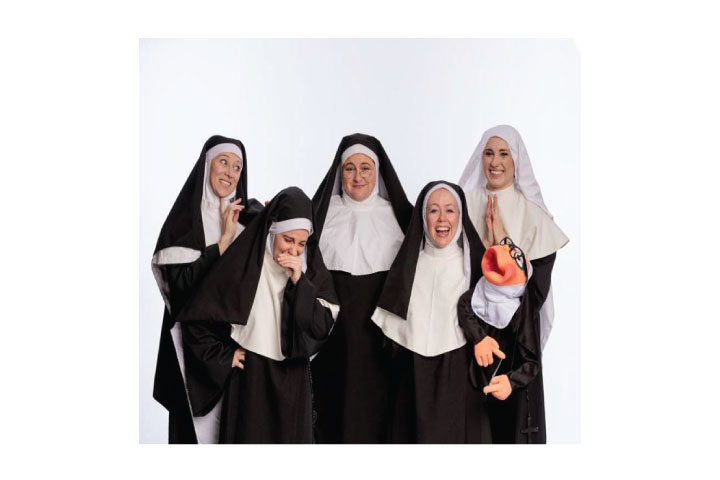 The Little Sisters of Hoboken are in dire need of funds and decide to put on a variety show. Here we meet Reverend Mother Regina, a former circus performer; Sister Mary Hubert, the Mistress of Novices; a streetwise nun from Brooklyn named Sister Robert Anne; Sister Mary Leo, a novice who is a wannabe ballerina; and the delightfully wacky Sister Mary Amnesia, the nun who lost her memory when a crucifix fell on her head. Featuring star turns, tap and ballet dancing, and comic surprises, this show has become an international phenomenon.

Pat Payne will take the helm as director. Payne’s most recent directorial efforts at Candlelight were the runaway hits Disney’sMary Poppins, and Disney’s Newsies. His Candlelight directing credits include 42nd Street, Chitty Chitty Bang Bang, andHairspray. When asked about his goal for this production, Payne commented, “This show has an almost cult like following. It has been performed on 6 continents and translated into dozens of languages. The charm of this show is the humor and heart of this lovely show and you don’t even have to be Catholic to enjoy it (but it does help a bit).”

Choreographer Stephen Bertles is excited to work on Nunsense “Growing up Catholic (still am), my 1st grade teacher was a nun. She made me love school and the stage. She was the epitome of fun. The humor in Nunsense is spot on and respectful of nuns, but people of all faiths can enjoy it.”

Candlelight’s resident music director Phil Forman will lead the vocal and instrumental music. Forman has been seen on, under or behind the stage for over 30 years, including guiding the music for Candlelight’s productions of Disney’s Newsies and Disney’s Mary Poppins, along with Scrooge! the Musical.

With only five roles, Nunsense brings in a small but potent cast of talented women. Samantha Jo Staggs will take on the part of Mother Superior. Staggs’ powerful opera trained voice should play well as the leader of the group. Another well known face to Candlelight, Heather McClain steps into the second in command role of Sister Hubert. Sarah Grover, Lisa Carter, and Abbie Hanawalt comprise the rest of the cast.