On February 27 at noon, students, teachers and parents met at Poudre High School to march in protest of the incidents of deadly gun violence happening in schools all over the country. Students from the Poudre, Polaris and Fossil Ridge high schools joined forces with students from Lincoln, Lesher and Cache La Poudre middle schools for a march beginning at Poudre and ending in Old Town Square. The students were accompanied by parents and teachers. Also present were three police officers on 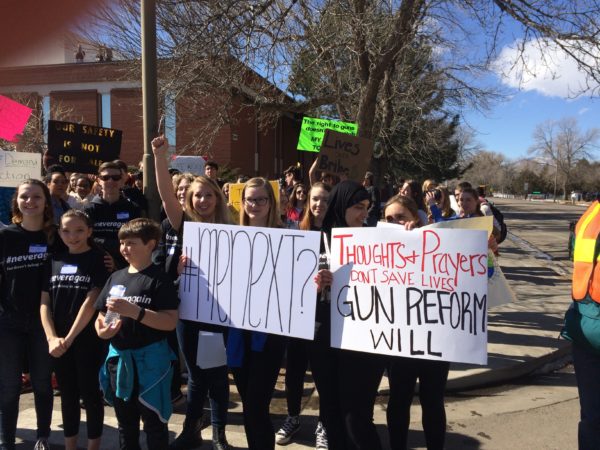 bicycles who met with other members of law enforcement along the route which began on Laporte Ave., then turned right and paused at Grandview Cemetery for a short period before continuing on Mountain Avenue.

Allie Holton, a Poudre High School Junior and one of the organizers of the event led the marchers with a megaphone. 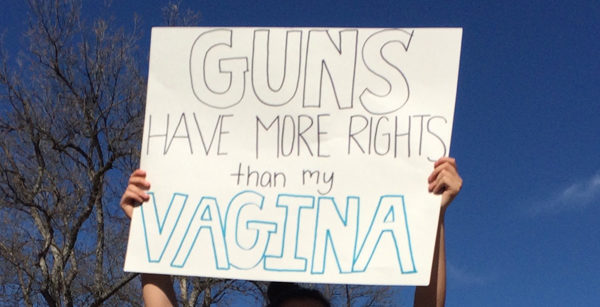 Slogans included: “This is what Democracy looks like!” and “Hey hey, Ho ho! The NRA has got to go!” Signs read: “Protect our Kids. Not our Guns!” and “Moms Demand Action”. The group of organizers, all wearing black T-shirts with the words “Never Again” printed in white, carried signs with photos, names and ages of the victims of the most recent school shooting in Parkland, Florida.

The procession was met by many locals who held signs and cheered for the marchers. Passing motorists honked and waved and cyclists rode slowly alongside. Those feeling the need to protect their second amendment rights also made their presence known, driving slowly down Mountain Avenue and flying American and Confederate flags. 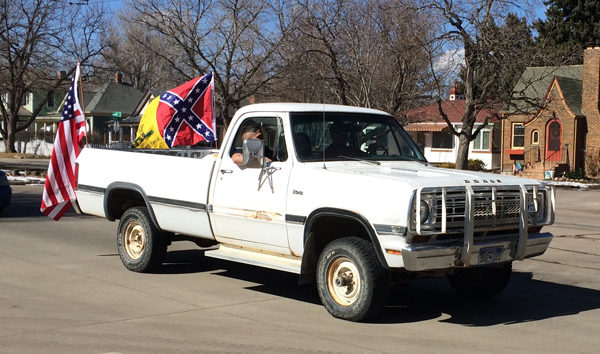 Finally crowded into Old Town Square, the protesters surrounded the stage as Allie Holton continued to lead the chants. Business people from surrounding offices left their desks to join the protest.

Though the flyer announcing the event insisted that only high school students would be allowed to participate, a large number of grade school and middle school students joined the group.

When asked about her need to be part of the event, Asher, an eleven-year-old sixth-grader at Cache La Poudre Elementary said “Last week I heard about the shooting on the radio and started thinking. I knew I had to be here.” Cc, a high school student at Polaris said she was there because her school was doing it. She also said she supports the cause and “Guns do not belong in schools”. Talia, a middle school student, stated, ” I’m here to make a difference. Not to take away guns but for more gun control.” She also mentioned the situation in Australia where a shooting in 1999 led to the enforcement of stricter gun laws.

Connor, a student concerned about his Second Amendment rights, stated “that law enforcement failed to act on four levels”. He cited an article published on Feb. 18 in the Washington Post that a team of Washington Post reporters uncovered disturbing facts about the shooter. They reported some teachers had banned Nicolas Cruz from their classrooms due to his erratic behavior. The article also stated that “Several middle school teachers who knew Cruz said in interviews that he was an increasing behavioral challenge and appeared to be on a troublesome path.” In a video interview posted in the article, math teacher Jim Gard, criticized the FBI for not acting on a tip. Connor also referred to a story on CNN criticizing the Broward Police department for failing to act on numerous reports.

By 2:30, the crowd was being dispersed and everyone was encouraged to go home. Amy Satterfield, one of the mothers who joined the event stated “We’re really proud of our kids. They’re inspiring. They breath life into my own sense of activism.”

Ready for some Rocky Mountain oysters?

January 22, 2018 admin Events Comments Off on Ready for some Rocky Mountain oysters?

They’re not oysters. And, no, they don’t taste like chicken. These regional delicacies are bull testes, harvested when male calves are castrated, and they’ll be served up sliced, breaded in a crunchy coating, and fried […]

Cameron Lalor,  Marketing & Membership Coordinator Fort Collins, CO – On the morning of Wednesday, October 31st, the Downtown Fort Collins community invites children and their families to creep along the sidewalks of Old Town […]

Ring in the New Year with First Night Fort Collins!