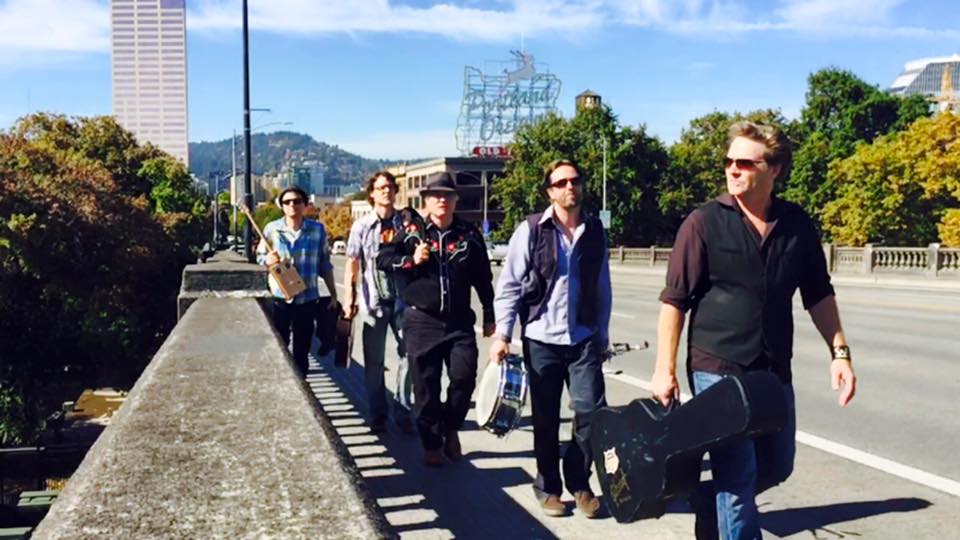 The first signs that fall is ending change year to year; winds made of pure bitterness, and the early signs of a snowstorm. These signs are indisputable proof that your dreams of summer are dead. In the midst of this chaotic nature, I sat down with Erik Lunde and Ryan Lennartson of the Americana Rock band, Lunde Station, to talk about their new music video. Filmed in Portland on a shoestring budget, the music video is inspired by some of Portland’s more seedy locations, in particular, the Burnside Bridge (which is the title track of the video) and its regular host of rather unsavory characters, some of whom even made it into the music video.


“In the next shot, there is a guy with no shirt on digging in a dumpster behind us, just wait.” Ryan exclaimed while we were watching the final version of the finished video. “It was a great trip, however, going to some of these sketchy locations was interesting.” The ‘sketchy locations’ Erik is referring to are the Burnside Bridge, the Salvation Army and the Rescue Mission. These locations and the city blocks that encompass them, are some of the last bastions of ungentrified Portland; raw and dirty, no boutiques without broken windows, or alleys without used needles. “I had never seen anyone actually shoot up before,” said Ryan “it was pretty crazy.”

It would be easy to look at this the wrong way, deeming these people to be ‘bad’ and the surrounding area as dangerous. However, as Erik described the area to me, it became more obvious that this was an area of despair, one if viewed through the proper lens could unleash some fantastic creative energy. “I used to have to walk across the Burnside Bridge on my way home when I lived in Portland, and one day I had the encounters that inspired the lyrics and music of the song. It was incredibly free flowing, I wrote it as soon as I got home that night.”
It seems only fitting to return to this environment to appropriately capture the essence of this song. On top of the tiny budget, there was little time to plan a music video with the rest of the band. “There was about two weeks of lead time and we did location scouting on the Saturday that we arrived,” Lunde added. The entire video itself was shot on an iPhone 6. Don’t let that fact deceive you. Lunde Station roped in videographer and champion of content, Circe Link, to help produce. An expert in producing music videos on a tight budget and with equipment not meant for high cinema, Link and the guys from Lunde Station managed to make an impressive music video utilizing some cool tricks.


This style of guerilla filming has become the norm for bands who want to have a music video online quickly, easily, and with little budget. Generally I am not very fond of them; sloppy work and bad quality break the illusion and are a quick turn off. However, with Lunde and Link, both of whom have a solid background in music and video production, it worked. This music video could not have turned out better, I could not recommend attending the video release party more. So get out of the bitterness and the cold. Have yourself a glass of aged whiskey to warm your bones. Join all of us on December 2nd at their video release party at The Whisk(e)y; you won’t want to miss it!
Event: FREE video viewing party for “Burnside Bridge,” December 2, 7 pm, The Whisk(e)y, 214 S. College Ave., Fort Collins.
Facebook Events Page