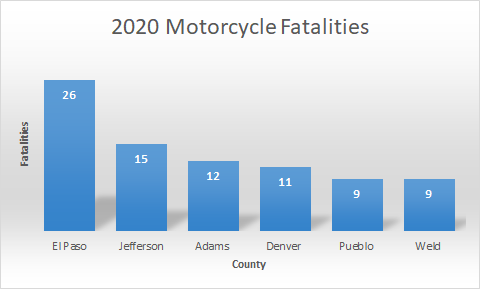 Following the deadliest year on record for motorcycle riders, the Colorado Department of Transportation (CDOT) is launching a new campaign, Some Things are Hard to See. The campaign recognizes that motorcycles are much smaller than cars and can be difficult to see. Often while turning left at an intersection, drivers miss seeing a motorcycle, which results in a “t-bone” crash.

“Every one of these motorcycle crashes could have been prevented,” said CDOT’s Office of Transportation Safety Director Darrell Lingk. “Taking a moment to check blind spots and using extra caution when pulling into an intersection can be the difference between life and death for a motorcyclist.”

“It takes just a moment to carefully check your surroundings,” said Justina Carney, who failed to see a motorcycle as she switched lanes on I-70 resulting in the death of the rider. “Your mirrors can miss blind spots so be extra careful. This was a horrible crash that will live with me for the rest of my life.”

To date in 2021, there have been 59 motorcycle fatalities on Colorado roadways. The campaign will run on social media and on radio stations across the state, with a focus in El Paso, Jefferson, Adams, Arapahoe, and Larimer counties where most motorcycle crashes occur.

The following public service announcement will be broadcast on radio stations: Motorcycles are hard to see. But some things are harder to see. Like emergency rooms. Funerals. And crying faces. Save a life. Look twice for motorcycles when turning left.

The following social media announcements will also be used statewide: