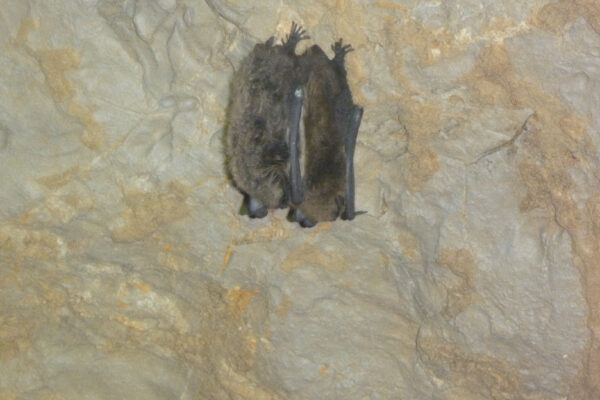 Photos of a little brown bat courtesy of CPW.

The fungus that causes white-nose syndrome in bats, Pseudogymnoascus destructans (Pd), has been found in a sample at a little brown bat maternity roost in the City of Fort Collins Gateway Natural Area.

Laboratory tests conducted this month at the National Wildlife Health Center in Madison, Wisc. confirmed that Pd was found in environmental swabs on the roost entrance. Guano samples of the site are pending. It is the second positive test for Pd this summer. The fungus was first detected in Colorado in a bat captured at Bent’s Old Fort National Historic Site in Otero County outside of La Junta, Colo. CPW and the U.S. Geological Survey (USGS) announced the positive detection on July 21.

Pd is an invasive fungus that causes white-nose syndrome (WNS) in hibernating bats. It can spread rapidly, primarily through bat-to-bat contact. There has not yet been a confirmation of a bat with WNS in Colorado, but the presence of Pd usually precedes confirmation of disease by one or two years.

White-nose syndrome is an invasive disease that has killed millions of bats in the United States, including over 90 percent of exposed populations of three bat species in fewer than 10 years.

Humans are not known to be affected, but humans can also spread the disease by visiting caves or other areas where bats roost.

“This detection not only adds a new location but also an additional species of bat that is positive for the fungus,” said Colorado Parks and Wildlife Species Conservation Coordinator Tina Jackson. “We will continue working with our partners and the public to identify additional roosts throughout the state for further monitoring.”

“Continued monitoring for symptoms of white-nose syndrome in bats and the number of bats in the roost will allow researchers to track the disease status and potential population changes,” said Jennifer Roberts, Environmental Planner for the City of Fort Collins Natural Areas Department. “Gateway Natural Area hosts a large maternity roost of little brown bats in the former Fort Collins water treatment plant. It is unknown exactly how many bats are occupying the roost, but it is thought to be the largest maternity roost in Northern Colorado. Protecting maternity roosts is important for keeping bat populations stable, especially during population stressors such as disease.”

The City of Fort Collins, CPW, the Colorado Natural Heritage Program, and other agencies will continue to monitor bats throughout the state and increase surveillance in the area of this finding in Northern Colorado.

Any new sign of Pd spread is worrisome because bats are an essential and beneficial part of the ecosystem. Bats play critical roles in insect control, and cave ecosystems and provide food for other animals.

State and federal agencies in Colorado and throughout the U.S. ask that outdoors enthusiasts help by following these recommendations:

According to the guidelines established under the national WNS response plan, Colorado remains in the “At-Risk/Intermediate” category for decontamination protocols because Colorado is adjacent to multiple states with confirmed WNS and now also has documented Pd detection within the state.

In 2018, Pd was documented in Wyoming so experts were not surprised by it showing up in Northern Colorado.

“Given the proximity of the Gateway Natural Area maternity roost to known positive sites in Wyoming, this detection is not unexpected,” Jackson said.

CPW and the USGS, along with U.S. Fish and Wildlife Service and National Park Service, have been conducting WNS surveys for over a decade, monitoring bats for presence of the fungus. Colorado is home to 19 native bat species, at least 13 of which may be susceptible to this disease. Colorado’s native bats are all insect eaters and use various habitat types across the state. They are most active during the summer months and spend the winter either hibernating in underground roosts throughout the state or migrating south.

See the full range of national decontamination guidance for the U.S. at whitenosesyndrome.org/static-page/decontamination-information.