Strikeouts are in the season following the MLB All-Star game at Coors Field in Denver. However, when it comes to impaired driving, it’s one strike and you’re out. The Colorado Department of Transportation is teaming up with the Colorado State Patrol and local law enforcement agencies for the Summer Strikeout DUI enforcement period from July 16-19. Increased DUI patrols will be on the lookout statewide to remove impaired drivers from Colorado roads.

“This summer, make the right choice, don’t drink and drive. We all know that there are all kinds of gatherings involving the consumption of alcohol and marijuana, there is no reason to be caught off guard without a plan,” said Matthew C. Packard, Chief of the Colorado State Patrol. “Just one drink increases the chance of having a crash, sometimes with tragic consequences. We are all responsible for our actions and our actions behind the wheel affect the safety of other motorists, our loved ones, and ourselves.” 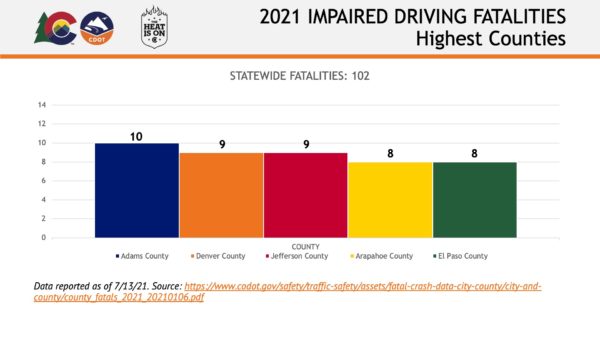 “Everyone traveling on Colorado roads has loved ones expecting them to arrive safely,” said CDOT’s Office of Transportation Safety Director Darrell Lingk. “Impaired-related crashes are completely avoidable. Arrange for a sober ride before consuming alcohol or marijuana. Zero deaths on Colorado roadways is the goal and impaired driving prevention and education is a major component of helping us achieve it.”

On June 28, CDOT launched a new It’s Not Complicated campaign which aims to inform Coloradans that no matter how many alcoholic beverages they’ve had, the only safe choice is to never drive impaired. Many people try to convince themselves they are okay to drive after consuming alcohol or marijuana. The truth is, if you’ve consumed any amount of an impairing substance, it’s never okay to drive. The campaign can be seen statewide in radio ads, social media, billboards, video ads and messaging in liquor stores. For more information on the It’s Not Complicated campaign, visit: https://www.codot.gov/safety/impaired-driving.

In addition to the It’s Not Complicated campaign, CDOT is partnering with local bars in Denver and Colorado Springs to help increase awareness about the dangers of impaired driving. CDOT will install a photo booth at Blake Street Tavern from July 29-30 to deliver its DUI prevention message in a unique and engaging way. The photo booth activation will occur again in Colorado Springs at a local venue the following weekend, Aug. 5-6.

For yearly impaired-driving crash and fatality data in Colorado, visit https://www.codot.gov/safety/traffic-safety/crash-data-management/fatal-crash-data. Information about DUI laws in Colorado can be found at NoDUIColorado.org.