Want to be a scientist? The answer to that question will depend on your personality. You don’t need to be brilliant, conversant with esoteric topics in nuclear physics or molecular biology, or look good in lab coat white. A sprinkle of obsessive-compulsive behavior may serve you well along with a healthy dose of chronic skepticism — about almost everything. And data collecting often favors a methodical turn of mind—one that can suffer a bit of tedium, but finds joys in solving puzzles. If that sounds like you, many opportunities exist these days to become an avocational or “citizen scientist.” If weather also fascinates you, the Community Collaborative Rain, Hail and Snow Network (CoCoRaHs) may whet your appetite for meteorological science.

CoCoRahs originated in 1998 at Colorado State University after the devastating floods in Fort Collins in July of 1997. Longtime state climatologist, Nolan Doesken, lamented the fact that there was much too little local weather data — the in-your-neighborhood daily information about rainfall, hail and other weather events — that could help reveal not only when and where severe weather was happening, but also predict where it was going next. Nolan did something about the dearth of such data by instigating the CoCoRaHs volunteer network. 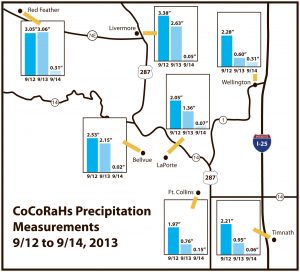 “I would never have imagined when we started this back in 1998,” Doesken said, “that we would even still be here, let alone capturing one of the state’s largest flood events. I was honestly thrilled to watch so many accurate rainfall reports come in each day throughout this storm and then to see professionals from all across the country utilizing our volunteer reports to track the storm.”

Volunteers in Colorado allowed CoCoRaHs “to make a very reasonable first stab map of regional precipitation day by day throughout this recent storm event,” said Doesken. The same information took days or even weeks to collect in 1997.

“A few ‘significant weather reports’ submitted via CoCoRaHs during the heavy rains of Sept. 11 and 12 contributed to important and timely flash flood warnings issued by the National Weather Service,” Doesken said.

Nature centered her fury this time on Boulder. The 9.08 inches of rain recorded on Sept. 12 shattered the previous record of 4.80 inches measured July 31, 1919, and Boulder’s annual total rainfall recently eclipsed the 29.43 inches set in 1995.

But this storm dumped lots of water up and down the Front Range. I measured 5.24 inches of rain from Sept. 10 to Sept. 16 in my own CoCoRaHs rain gauge in Wellington, compared to the 8.11 inches of precipitation recorded from Jan. 1 to the end of August. Just over 2.25 inches fell on Sept. 12.

CoCoRaHs’ goal for volunteers is one per square mile in urban areas and one per 36 square miles in rural locations. Doesken says they are close to that density in Fort Collins and some surrounding areas, “but with our Front Range topography, we’ve found that spacing to be much too crude to capture storm variations. We covet additional new volunteers.

“We really need more data from the northern portion of our area and the North Fork of the Poudre area in particular.”

Currently, CoCoRaHs has six active stations in Wellington, two in Timnath, three in Red Feather, nine in Livermore, four in LaPorte, 16 in Bellvue, and 97 in Fort Collins. The graphic in this article shows rainfall records from each of these locations from Sept. 12-14. More detailed records, raw data and maps can be found at www.cocorahs.org — along with information about volunteering. Doesken says readers can also send in rainfall estimates or severe weather information “from any and all locations in rural Larimer County and NW Weld” to coflood2013@gmail.com.

CoCoRahs has also been actively recruiting teachers and students to join in the effort. Twenty-eight Larimer County schools and 13 Weld County schools are involved. Vicky Jordan, science teacher at Wellington Middle School, initially passed the word to me about this Citizen Science network.

If life can be described as “long uneventful interludes punctuated by brief episodes of abject terror,” I guess science can be considered to consist of “long uneventful interludes of observation punctuated by brief episodes of data overload,” like the recent pounding rainstorms. When all that data is analyzed, however, patterns sometimes emerge. Scientists, whether amateur or professional, thrive on those moments of epiphany when nature’s skirts swirl for a moment, providing a tantalizing glimpse of some of her secrets.

The Larimer County Sheriff’s Office in coordination with multiple federal, state, county and local agencies as well as several charitable organizations will be holding an evacuee informational meeting Friday, September 20 at 6:30 p.m. The […]

Colorado Skies: Perseids to visit the Colorado sky during the second week of August

July 22, 2016 admin Uncategorized Comments Off on Colorado Skies: Perseids to visit the Colorado sky during the second week of August

As Earth wheels about the sun in its vast, nearly 200-million-mile diameter orbit, from time to time it encounters dusty debris that has been boiled and blown from the heads of comets as they periodically […]

Not only were Colorado homes damaged by the recent severe storms, flooding, landslides or mudslides, but many survivors also lost valuable personal documents. The documents include everything from Social Security cards to driver licenses to […]