Over 55,000 Coloradans helped design, choose the State’s most widespread piece of branding

After almost two years of development, over 55,000 votes, and more than 400 entries by 119 Centennial State artists, the Colorado Division of Motor Vehicles (DMV) unveiled the state’s newest driver license and identification (ID) card. One of the photos is from a Northern Colorado Photographer.

Governor Jared Polis revealed the Iconic Credential and announced the new card is now available on Monday, February 28, during a press conference at the History Colorado in Denver.

“For the first time, Coloradans had a voice in the design of our official State credentials and I am proud that the new Colorado driver license better reflects the iconic beauty of our great state,” said Governor Polis. “This card continues to build on the convenience of Digital IDs and mobile driver licenses, and like the Rocky Mountains, this card is built to last with the latest security technology. I am excited to renew my own license today and be among the first to get this beautiful new Colorado driver’s license.”

Mark Ferrandino, executive director of the Colorado Department of Revenue (CDOR), which oversees the DMV, agreed and said the Iconic Credential is in his opinion the best-looking credential he has seen.

“The Team did a great job with this credential,” Ferrandino said. “It’s colorful, sturdy, and secure, and really showcases our great state. I am proud to have helped bring this card to Colorado, but I am even prouder that more than 55,000 Coloradans had a say in how the Iconic Credential looks.”

Coloradans who would like to obtain the Iconic Credential can renew (or obtain) their driver’s license or ID card online or in-office. Credential renewals, as well as 44 other services including appointments, are available online at myDMV.Colorado.gov. Coloradans seeking in-office service will need to schedule an appointment and can find scheduling information, including a visual walkthrough, at DMV.Colorado.gov/AppointmentScheduling.

In addition to physical cards, the Iconic Credential will also be available as the Colorado Digital IDTM in the myColorado™ app, now used by more than 600,000 Coloradans.

More information can be found at DMV.Colorado.gov/newcard.

About the Iconic Credential

Preliminary work on the Iconic Credential began in February 2020, and on Aug. 17, 2020, the Iconic Colorado contest launched, with the goal of transforming Centennial State’s driver licenses into the nation’s most beautiful and closed with 407 submissions (280 front-side entries, 127 back-side entries) from 119 entrants.

Three finalists were selected by a committee that included motor vehicle administrators, artists, and Gov. Polis with a final, public vote on the top three designs. 55,760 Coloradans voiced their choice for the design of the new credential.

The winners, photographers Matt Nuñez and Gabriel Dupon, were revealed on March 1, 2021, during a press conference. The new designs were slated to debut in fall 2021 but that was pushed to early 2022 to allow further refinement of the card. Colorado last redesigned its credentials in 2015.

Nuñez and Dupon each received a $500 grant, courtesy of Colorado Creative Industries, a division of Colorado’s Office of Economic Development and International Trade (OEDIT), which partnered with the DMV to help promote the contest.

Nuñez placed first with his Mount Sneffels entry, which received 26,520 votes or 47.56% of the total. The second-place design of the Maroon Bells garnered 21,124 votes or 37.88% of the total. The Black Canyon entry placed third with 8,116 votes for 14.56% of the total votes. Nuñez was the lone finalist selected through two rounds of blind voting that saw his three colorful images vie for the Iconic Colorado crown.

Nuñez is a fifth-generation Coloradan from Colorado Springs, currently living and working in the Denver area. He is proud to come from a long line of family members in military and government service, including his late grandfather, Joe Nuñez, who came to Colorado as a child and served in the State legislature representing Douglas County.

Nuñez was raised in a military family, spending his childhood abroad and across the U.S., before returning to Colorado after college. He has taken photos since high school and quickly took up landscape photography as his focus after spending summers in the Centennial State while in college.

Nuñez works full time as a program manager with the Colorado Outdoor Recreation Industry Office and is passionate about building more vibrant Colorado communities while showcasing them through photographs in his free time.

Back Design
In a tight race, Dupon placed first with his Sprague Lake entry, which received 19,989 votes or 35.85% of the total. The second-place design of the Shrine Ridge Trail by Fred Lord netted 18,694 votes or 33.53% of the total. Jenn Cunningham’s painting of the Bison on the Plains placed third with 17,077 votes for 30.63% of the total votes.

Dupon is a Colorado native who loves to be creative and make the unknown extraordinary. One way he does this is by taking pictures that convey the meaningful, timeless and authentic beauty that surrounds him.

“I found out about the contest when I was making an appointment to the DMV back in 2020.  I entered my Sprague Lake image and a few months later, Governor Polis hand-selected that image for a public vote,” said Dupon.

Currently, Dupon is a portrait and wedding photographer with his own photography business. Other than photography, Dupon values spending time with his family, making films, and enjoys going on adventures such as traveling, alpine skiing, biking, and paddleboarding.

“Northern Colorado is my home as well as I was born and raised here. My family and I still live here.  I also run my photography business here, as well, near the Wellington area, Carr to be exact” Dupon said. “The story behind the Sprague Lake photograph started with a hike on a spectacular day in late May 2020 in Rocky Mountain National Park.  My intention was to capture it authentically.  Capture what we can’t see, not just what we can see.  I did this by showing the mid-day sky and colors, getting close to the lake’s surface to show the movement of the water, and showing a perspective unlike any other. This photo definitely displays iconic Colorado, but ultimately this photo conveys Colorado authentically.”

Three finalists were selected by a committee that included motor vehicle administrators, artists, and Gov. Polis. with a final, public vote on the top three designs. 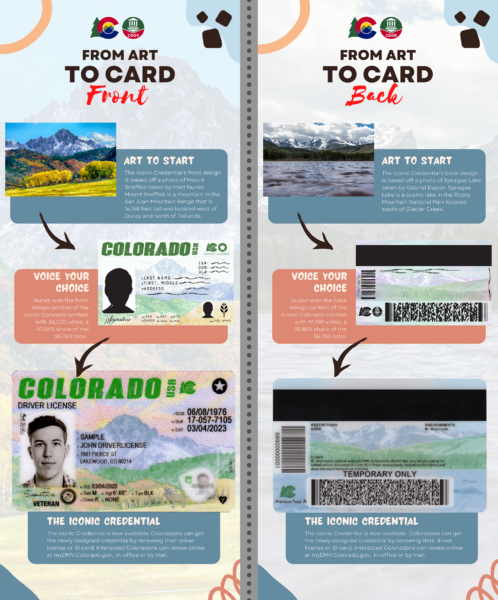 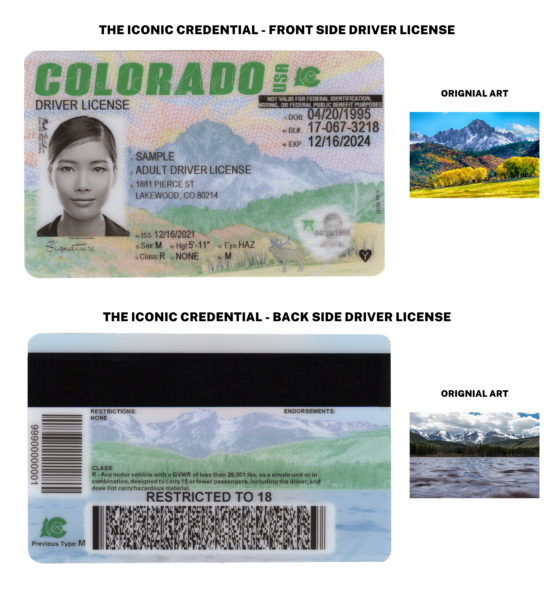 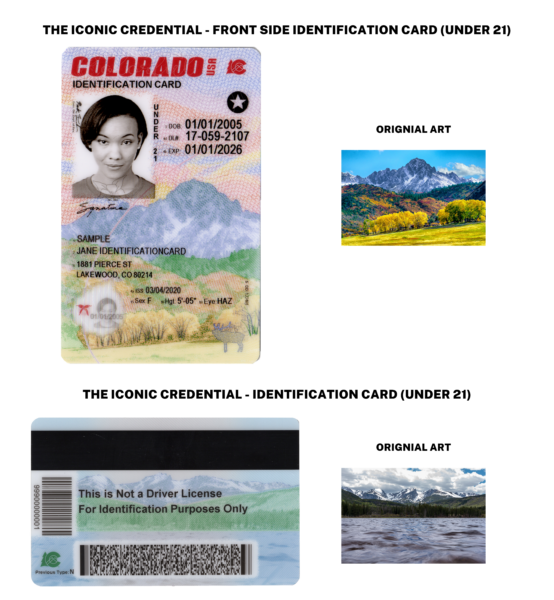