After a whirlwind two-day survey of every imaginable aspect of Wellington by a nine-member Downtown Colorado, Inc. team, a vitally interested group of 100 residents and business owners braved snowy weather to learn the preliminary results at a public presentation at the Leeper Center on Feb. 25.

DCI is a nonprofit organization dedicated to the improvement and success of small towns all across Colorado. Their presentation was incorporated into the regular work session of the Wellington Board of Trustees.

The team’s assessment was a required first step prior to initiation of the Downtown Revitalization and Main Street project spearheaded by local business owner Peter Pronko. The assessment team was made up of experts in urban planning, economic development, finance, real estate, public/private organizations and design.

Downtown Colorado, Inc.’s two-day assessment of the Wellington downtown area concluded Feb. 25 with a presentation to the Wellington Town Board. A PDF of the organization’s report can be found here. 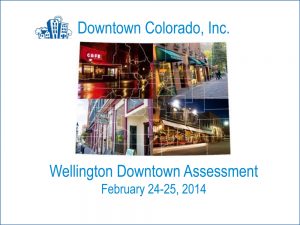 Overall results of the assessment will come as no surprise to Wellington residents and business owners. The was team was quick to acknowledge Wellington’s positives and to point out the need to revitalize the downtown core by initiating new efforts and making a wide-ranging series of changes that will attract new business. Specific recommendations were made during the team’s PowerPoint presentation and associated discussion. Findings will be elaborated in detail in a final report due in two months.

A series of observations gleaned from several different focus groups held as part of the assessment revealed the existence of a great deal of pride in the community, an appreciation for Wellington’s small town atmosphere, a fantastic school system, a growing population and excellent access to the Internet, interstate highway and railroad.

On the other side of the coin, needs such as improved infrastructure downtown, more locally based youth activities, more restaurants, and fill-in of the 33 percent of down properties that are currently vacant were identified.

“I fell in love with Wellington. The people I met were gracious, hard-working and obviously very proud of their community. While there are many opportunities and some challenges, there are also great people working very hard to make a difference,” said DCI team member Hazel Hartbarger, who is director of the Arvada Economic Development Association. “With more community engagement, I am confident that downtown Wellington will be vibrant once again and Wellington will continue to be a great place to live, work and play. I was grateful for the chance to visit.”

Some of the recommendations for revitalization of the downtown included the following:

Despite the bad weather, many people stayed after the presentation and spontaneously formed into small groups to discuss among themselves. Pronko said he was pleased to see the public’s enthusiasm directed in this way. He said working in small groups according to one’s interests and skills and approaching a very large task in “achievable units” will lead to a successful outcome. “We need to identify and isolate these areas and then get involved.”

DCI staff emphasized the importance of rapid follow-up and, according to Pronko, they have already been contact in order to keep the ball rolling. He encourages anyone interested to choose one or two target areas they want to work with and then make sure efforts in these areas move steadily forward.

Membership in DCI makes available all kinds of expert advice that the revitalization project will be able to draw on as needed during the process. Everything from one-on-one advice to regularly-held seminars and assistance with grant writing is available through DCI.

Pronko’s interest and expertise is in the area of financing. “It’s hardest part,” he acknowledges, “but developing the ways in which these efforts will be paid for is what will ‘give the project its legs’” he said.

Jack Brinkhof, trustee and candidate for mayor, felt the assessment process was “very beneficial. It’s good to see things in a different light,” he said. “Sometimes, when you are so close to something, it’s difficult to see the bigger picture.” Brinkhoff liked many of the assessment team’s suggestions and has several specific ideas of his own. His first priority is to address the issue of flooding along Cleveland Avenue. “By doing it one step at a time we can spread out the cost,” he said. He’d like to pursue grants and perhaps seek some assistance from the hydrology department at Colorado State University to get this expensive job done.

Also a high priority for Brinkhoff is cleaning up and leasing the vacant lots downtown, paving them for parking which is at a premium on weekend nights. He’d also like to further investigate the possibility of a Wellington Police Department as compared to continuing the town’s contract with Larimer County.

“We need to see which alternative makes more sense,” he said.

Brinkhoff acknowledged the need for increased communication and praised the recently developed Wellington Facebook page. He’d like to promote a high school in Wellington and repurposing of Wellington Middle School for town offices, the Boys and Girls Club, Police Department and Senior Center. “It’s a cheaper alternative than building new facilities and a way to preserve the school building,” he said. A new middle school on ajacent property would be part of the plan.

He’s also concerned with addressing sewer, water and utilities issues in anticipation of future growth. Breaking ground for an expanded sewer system doubling capacity is scheduled for April. Brinkhoff is working with the Economic Development Commission and PVREA to assess future needs for utilities.

The fact that some good summer rains had generated a plentiful supply of green grass was more than apparent during the 11th Annual Feeders and Friends event held at New Raymer in mid-August. The cowboys […]

“Oops,” Poudre High School counselor Cassie Poncelow thought after she’d spent a short time working in a well-paid internship as an interior design student. “What am I doing here? This isn’t for me.” She ended […]

The Canyon Lakes Ranger District will once again welcome an AmeriCorps crew in 2014 to help with hazardous fuels reduction work and firefighting efforts. The crew arrives next week and this is the fourth year […]