For the March, 2012 T-Bar Inn Mystery Photo Contest, we asked readers to send us a short fiction piece about how the “Lorena” van near the entrance to Rist Canyon got there. Some of the made-up submissions were over our 150-word limit, but reprinted here because we like them. 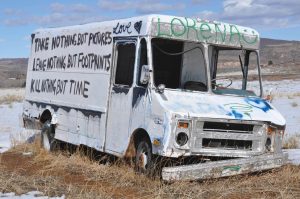 [/media-credit]She tore through her battered effects; books flying, papers and crosswords.
Where was it!?
Combing through dusty corners and dark drawers, racking her memory.
What had she done with it!?
“Just a moment, almost ready!” Annette called. She heard the door open and close.
There!
Annette gathered her things and rushed to the foyer to find the man named Chance had gone.
So she took the time she had saved and the love she had hidden away and gave chase to Chance. Naked and swerving wildly, screaming down the mountain on the edge of control. Over her head she slipped the red dress for the first time. Right hand clutching the wheel through switchbacks, tires squealing in protest, left hand sliding into left sleeve. And then silence.
On the side of Regret’s van, with the last of her life, and time, and love, she painted a warning to the world.

Jered and Callie were headed home from Hank Silva’s when the engine seized up on the Wonder Truck. Walking 16 miles back to Hank’s was not an option. It was midnight and Callie was nine months pregnant, so Jered prepared a pallet in back of the bread van.
By dawn, there were three Jeters. Lorena’s birth was smooth as silk. The new parents spent the early morning hours watching Lorena drink and sleep, yawn and wiggle her toes.
About 8 a.m., Hank’s VW bus appeared on Farr Road heading down to the Fort for llama feed. He wheeled over to the van and simultaneously became godfather and chauffeur.
On Lorena’s first birthday, the Jeters and friends caravanned to Wonder Truck to celebrate and decorate. Although the annual treks to the van ended when Lorena left for college, the weathered van — with its sage advice — still sits in that otherwise virgin meadow.

Lorena was the love of Lorenzo’s life. Being coyotes, they wandered from den to den, but wanted more. They made a deal with a local dairy farmer to stay away from his chickens in exchange for his old milk truck. Lorenzo moved the truck to Bellvue, and wrote “love” and Lorena’s name on it in her honor. The vehicle provided them with shelter from the blustery winters, and, later, for their three pups.
Word got out about the Bellvue coyote family, and people kept driving right up to their home. Lorenzo had to do something to protect his family. He got some paint, and wrote “TAKE NOTHING BUT PICTURES, LEAVE NOTHING BUT FOOTPRINTS, KILL NOTHING BUT TIME” on the outside of their house. So if you see the coyotes by their truck, please respect Lorenzo and Lorena by parking far away and leaving your firearms at home.

In order to write this story, I interviewed a piece of iron on the van and I apologize for any inaccurate translation, as iron is a hard language. The van declined to be interviewed. The iron’s responses are in quotes.
“When I was a lump of ore in the ground, I did nothing. It was slow (boring) for a long (time*).
“Then I was dug up and put on an ore ship and found myself in Pittsburgh where I was smelted into iron. This was exciting. I want to know why it is called smelting instead of exciting? The name must have come from the smoke or the smell.”
“Next I found out I was in Detroit where I was made into a delivery van. Not the whole van but a part.”
I asked “What part?”
The reply was “I don’t know. Iron is not smart, only strong.”
“Then I was delivered to a dealership which did not look like an ore ship at all. That was alien to me. But I was a delivery van, so I was delivered. Is there a pattern to this? There must be, because I delivered things for a long (time*).”
I asked “How long?”
“Time? I don’t know time. All I know is long.”
Iron continued: “Then aliens caused something to go wrong with some of the other parts of the van.”
I asked “Aliens? As in beings from another world? What aliens? What do they look like?” Now I was excited!
Iron replied: “Aliens are things or happenings that iron has no ability to understand.”
I replied: “Well rats! No extraterrestrials.”
To which iron replied: “Rats I know about. Extraterrestrials are alien to me. Then my person put me here in this field to protest something. While putting the sign on the van, he spoke of taking, doing, leaving and killing nothing. That’s exactly what I did while I was still in the ground.”
Iron continued: “So the sign must be telling everyone they should be in the ground. See you some long.”
*Iron does not know what time it is.

He ran away from home for good reason when he was young and resorted to crime to survive. Now he was running from the law. He lied to get the job at the dairy. Today he was racing the milk truck up the canyon to be on time with his route. Suddenly, there she was, strikingly beautiful, in the middle of the road as if her feet couldn’t move. Then he realized, she wasn’t going to move! He swerved, the truck lurched and, before he knew it, it was lodged, bent and broken in the open field. He was injured and in despair. He’d lose his job and was certain to end up in jail. Then, there she was, sobbing, offering help, desperate because she knew what she had caused. Moments before, she felt she had no reason to live, but in an instant that changed, her sole purpose now was to help him.
No one ever knew what became of Jake and Ella. All that was found was the wrecked milk truck and the words left behind to make them immortal.

Getting old is the pits; creaking joints, slow feet, things sagging. Some of us end up in nursing homes and some are just put out to pasture.
One day a car stopped, humans got out, and just stared at me. This had never happened. I was never much to look at even before I got old.
“She’s perfect,” they said.
If there had been any fluids left, I would have broken down and cried.
One of the humans climbed onto the hood of my nose saying, “This is where Lorena, her name, should go.”
I was thrilled. I’d never had a good name before. Only, ‘junk heap’ or ‘dang you old truck.’
Then they painted my ribcage. When finished, they stepped back with big smiles and one of them said, “Hopefully people will read this and just stop and think. Then we will have accomplished something — maybe even a legacy.”

Here I sit reflecting on the past,
Even then, I knew my days could not last.

My delivery time was so fine,
But now I’ve been relegated to a sign.

No longer do I run the roads,
Instead I remain in this repose.

New, my driver thought me pretty,
Now I am thought such a pity.

If my thoughts could be seen,
They are: Recycling me would not be mean.

Oh, yes, a joyful thought! Recycle me!
Then something useful & pretty I might be.

Instead of being roadside trash,
I could be in a party bash.

OH PLEASE recycle me. Do!
Then I could become a barbecue.

National Arbor Day takes place on April 26 this year, and the Arbor Day Foundation is making it easy for anyone to celebrate the annual tree-planting holiday. Members who join the Foundation in April will […]

September 11, 2011 marks the tenth anniversary of the terrorist attacks on the World Trade Center, the Pentagon, and flight 93 that crashed near Shanksville, Penn. To commemorate this anniversary the Poudre Fire Authority along […]

The Health District of Northern Larimer County is expanding the financial eligibility for programs that provide prescription assistance and reduced-cost mental health counseling for people with low incomes and no health insurance. The new financial […]