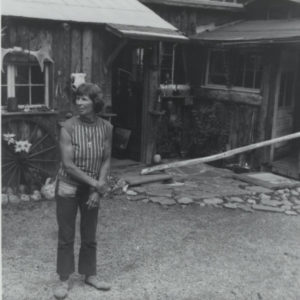 Skin Gulch in Poudre Canyon, a few miles west of Mishawaka, was Polly Brinkhoff’s place on earth. Her isolated retreat was so much a part of her lifestyle that she stayed in her log home overlooking a bubbling stream until the day she died in 1999 at age 84.
No matter that this tiny woman, 5-foot-3-inches and 105 pounds, had to chop wood, haul water, keep the kerosene lamps trimmed and filled and do without hot showers and indoor plumbing. From her tiny art studio perched on a hilltop above her home, she had an unobstructed view of the mountains that nurtured her.

For Polly, the trade-off was fair enough. “I’d rather live in a hole in the mountains than in the finest house in town. I’ve lived without electricity and running water for so long that I never think about it,” she said. She didn’t even own a refrigerator and kept her food in a cave.

The love of the outdoors and a fierce sense of enduring hardship hasn’t been lost for Polly’s grandson, Jack Brinkhoff, the Mayor of Wellington who also works in sales at Mountain States Pipe & Supply.

In the summer, Polly loved to pack up her horses and go deep into the mountains on pack trips, sometimes alone, sometimes with one of her friends or, best of all, a young Jack Brinkhoff. Closing up her place for a while required nothing more than shutting the front door.
“She taught me to appreciate the outside,” said Jack. “When I was age 9, we’d often hike above Skin Gulch to a cabin Polly owned on a mining claim off of Old Flowers Road at about 8,000-feet elevation.”
Polly’s homestead in Skin Gulch sat at about 7,000-feet elevation but endured decades of fierce winters despite its drafty walls and dilapidated appearance.

In 1951, while her husband, Joseph Finley “Rattlesnake Jack” Brinkhoff, was receiving treatment for old war injuries at Fitzsimons Army Hospital in Denver, the place where they were living burned.

Polly, not knowing where to turn, took the advice of an old miner who lived and worked in Manhattan, a mostly-abandoned town not far from Poudre Canyon. He told her of a rich vein of copper in Skin Gulch and explained how she could stake a claim to the land surrounding it.
Polly and Rattlesnake Jack staked their claim and built their home using scrap boards and slabs from sawmills in the area. The structure included a large living-dining area, two bedrooms and a primitive, homey and welcoming kitchen. After Rattlesnake Jack died in 1970, Polly tore out a wall and installed large windows to provide light for her artwork. She was a painter, woodcarver and created three-dimensional plaques, much in demand by tourists up and down Poudre Canyon.

The walls of Polly’s home were covered with photographs of her daughter, Sally, and sons Travis, Mike and Dan and their families — a scrapbook on continuous display. On a side wall, a newspaper clipping described Polly’s eight completions of a grueling 24-mile burro race from Leadville to Fairplay. On her third try she won the women’s division on Loco, a burro she bought for $19.

Polly owned horses, a burro, dogs, cats, chickens and a couple of guinea hens. She adopted and fed a squirrel, hummingbird and at least 15 bluejays.

The exterior of Polly’s home was adorned with trinkets that caught her fancy over the years: Old bones, pieces of machinery, rocks, kitchen utensils, an old wagon wheel — all things that defined her.

For many years Polly supported herself with her art and a couple of months’ work every year on the tree-potting crew for the U.S. Forest Service in Fort Collins. She commuted to town daily in her four-wheel drive vehicle, fording the streams that crossed her bumpy dirt road four or five times.

“As we got older we helped maintain her cars, mostly Toyota pickups,” said Jack Brinkhoff. “Those seemed to hold up the best.”

Polly loved driving back and forth to Fort Collins to play bingo, sometimes two or three nights a week. She did that for her last 20 years.

“We couldn’t keep her from driving,” said Jack. “She always said that if we took away her car — her independence — that she’d kill herself.”

Jack explained that when he lived in LaPorte, there was a knock on his door at about 10:30 at night. Polly, with the rescue squad as escort, was at the door.

“They said she’d slid off Water Works Hill in Poudre Canyon coming back from playing bingo in Fort Collins,” said Jack. “Her truck was totaled, but she didn’t want an ambulance. She told the rescuers just to take her ‘to my grandson’s house and he’ll take me to the hospital.’”
Her luck ran out in 1999 when Polly died in a one-car rollover accident near Mishawaka.

“Several days later we went to the wrecking yard to get some of her personal effects from the truck,” said Jack. “When we pulled the seat forward, low and behold there was this little chihuahua shivering in the cold. It’d been riding in the truck with her but survived the crash.”
Jack also remembers his grandmother as the lady who, just prior to bunion surgery, managed to cut off most of her big toe with a chain saw. The doctor said, “a half-inch more and my work would have been done.” They didn’t let Polly use the chain saw again.

“Just told her we couldn’t get it to run,” Jack said.

Polly’s teachings have shaped Jack Brinkhoff’s political career. He’s served as Town Trustee in Wellington for several years and was elected mayor in 2014.

“The biggest thing I learned from her was that when she set her mind to something, she got it done,” said Brinkhoff. “She was always upbeat and her favorite saying was ‘No sense in worrying about it.’”

“Early in my life I’d get upset or bothered about things,” said Jack. “As I got older I began to understand her mantra and (now) try not to let things get to me.”

There’s no trace today of the Brinkhoff cabin along Skin Gulch. The Forest Service offered to sell the Brinkhoffs the land where the cabin stood, but Polly never took them up on the offer. As Jack explained, Polly would always say “Why would I want to buy the place I’ve lived on for free for 50 years?”

In her later years, Polly liked to spend the winter months with her daughter, Sally, in Lander, Wyo. Her oldest son, Travis, died several years ago. Dan lives in Connecticut, and Mike (Jack’s dad) lives in a cabin in Manhattan, which makes the townsite not quite a ghost town.

Polly’s husband and Jack’s grandfather, Rattlesnake Jack, is buried in Manhattan where his grave is a landmark of sorts. Polly’s ashes are scattered close by, assuring that she will never leave the mountains she loved.

The Larimer County Republican Party is holding an information session for area voters to explain what caucuses are and why they’re important. Caucuses are neighborhood-level meetings that kick off the two-year election cycle. “In order […]