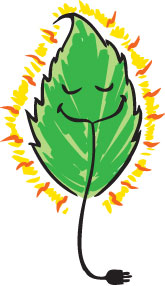 The world runs on solar power. It has for the last 3.5 billion years, since some microbe captured sunlight with chlorophyll and fired up photosynthesis. Human beings release stored solar energy when they burn wood (a green plant photosynthesis byproduct) or the gooey or gaseous remains of once-living things we call fossil fuels.
We have done this quite successfully to power our civilization, but have also generated waste products, including carbon dioxide, that are rapidly impacting global climate. The secret to reversing this trend and to continue to power our energy-intensive civilization, is to imitate the green plant powerhouse called a leaf, according to California Institute of Technology Prof. Nathan S. Lewis. In March, during a meeting of the American Chemical Society, Massachusetts Institute of Technology Prof. Daniel Nocera claimed his research team has created the first affordable working prototype.
Nocera admits he was not the first to do this. More than a decade ago, John Turner of the U.S. National Renewable Energy Laboratory in Golden created an efficient, but impractically expensive, device ($10,000/cm2) that used expensive metals as key catalysts. Nocera’s device, about the size and shape of a playing card, still uses silicon to capture sunlight, but employs much cheaper catalysts of nickel and cobalt.
Place his artificial leaf in a gallon of water, like you were making sun tea, and it splits the water into oxygen and hydrogen. Oxygen is the only waste product (as in a real leaf) and the hydrogen can be compressed into a fuel cell that in turn generates electricity-producing water as the only waste product.
How does this differ from the solar array that might be generating electricity this moment on your roof? Modern silicon cell solar technology dates back to the 70s when NASA was at the forefront of R&D in this area. These solar cells convert sunlight directly to electricity. Efficiency of these cells has improved over the years.
In October of 2008, ScienceDaily announced online that a University of New South Wales team had created a solar cell with 24.7% efficiency. The same dispatch noted that this effort is beginning to approach the “29 % theoretical maximum efficiency possible for first-generation silicon photovoltaic cells.”
Increased efficiencies help bring costs down for traditional solar cells, but they are still significant.
Lewis believes that artificial leaf technology holds greater promise for scaling up to sizes that would make for an affordable, widely used product. He envisions something that could roll off assembly lines like sheets of newsprint and cost about as much as home carpeting.
The U.S. Department of Energy seems to think Lewis’ visions have merit. They awarded him a $122 million grant to establish a research hub for ongoing work in this field over the next four years.
It’s quite possible that such new technology will find its way to developing countries first where competition with existing systems is less and there aren’t as many licensing hoops to jump through. Nocera said in the ACS press release, “The artificial leaf shows particular promise as an inexpensive source of electricity for homes of the poor in developing countries. One can envision villages in India and Africa not long from now purchasing an affordable basic power system based on this technology.” One of Nocera’s leaves, for example, could provide a day’s worth of electricity to a house in a developing country.
Sam Burnham, of the Fort Collins-based solar energy product and service provider Burnham-Beck & Sun, called the new artificial leaf “exciting to me for a couple of different reasons. Most exciting is that it includes energy storage for when the sun isn’t shining, but I also applaud the different approach to solar energy.” However, Burnham is a bit more skeptical of the speed with which this new technology will mature.
Nocera and Lewis predict a decade. Lewis says development of such a technology is critical to maintaining the power needs of our civilization. But Burnham said she’s not confident the artificial leaf will get to market in her lifetime, “or at all. I’d like to see something like this happen, but so far it is only premature media hype, in my opinion.”

Meanwhile, the real leaves power on. Perhaps they’d smile if they could, wondering why we primates are such slow learners.

Pets: How research into dog, cat cancers is helping develop treatments for humans

March 1, 2017 admin Uncategorized Comments Off on Pets: How research into dog, cat cancers is helping develop treatments for humans

We pamper them. We feed them, sometimes from the table. They sit on our laps and often sleep in our beds. They give us unconditional love. So, it’s not too surprising that we sometimes spend […]

Donn Maynard was planning on a ride home from his fellow firefighters on March 11. All the way to his farm in Cherokee Park. That was the day he left Firehouse 12 on the corner […]

USDA Natural Resources Conservation Service (NRCS) recently announced that funding is available for wetland protection, restoration and enhancement activities on eligible lands in Colorado. Proposals for projects are due by Friday, February 10, 2012. Funding […]