That’s how ancient real estate agents might have marketed these lands to prehistoric home-seekers thousands of years ago.

[/media-credit]
But such pitches would have been unnecessary. The appeal already was apparent to the peoples plying this piedmont from Canada to Mexico. Hordes of them — from stone-tool times to modern Native Americans with rifles — stopped to rest on this foothills freeway for at least a little while.

Now Colorado State University archaeology professor Jason LaBelle is continuing the university’s long-standing commitment to learn more about those who continuously occupied this territory for more than 13,000 years. Director of the Center for Mountain and Plains Research in CSU’s anthropology department since 2005, he has led the university’s renewed efforts to locate, map and in some cases excavate archaeological sites.

So far that work has been focused on sites in properties acquired or protected as part of the Laramie Foothills: Mountain to Plains Project.

However, LaBelle said he also identified other sites and would welcome speaking with private property owners about other archaeological sites on their properties or others they may know of.

What archaeologists know about the inhabitants over the centuries is based entirely on what they left behind. And there are plenty of leavings. So far, LaBelle said he and his students have identified more than 300 archaeological sites in northern Colorado and southern Wyoming. Most are on publicly owned lands such as the Soapstone Prairie Natural Area and Red Mountain Open Space properties and the city of Cheyenne’s Belvoir Ranch.

By far what they left behind was evidence of their housing, not unlike modern mortgage holders forced to move on for the loss of resources. Most of the sites documented by LaBelle and his students offer lithic evidence of residence, making Larimer County one of the most prolific regions for the presence of stone circles.

LaBelle prefers that term to the more widely used tipi rings. He said the latter tends to evoke a false image of conical structures supported by interlocking lodge poles transported across the plains by horses. 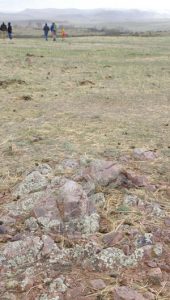 [/media-credit]
In contrast, LaBelle said Paleolithic peoples constructed stone circles to secure their rough hide residences from being ripped away by the stinging winds so familiar to anybody who has trod this exposed territory.

And lacking the horses that would arrive hundred of years later, these earliest inhabitants would have had no way to transport such substantial structures. They instead depended on dogs to haul their belongings, which were necessarily meager by virtue of being constantly on the move in search of food when nearby forage was exhausted.
“The horse was like gold to the mountain-plains tribes,” said LaBelle.

These prehistoric people left behind literally hundreds of thousands of stone circles constructed starting 1,400 or more years ago.

The most prolific collection of those rings is located in the Soapstone Prairie Natural Area. LaBelle once described it as the New York City of the Folsom people, with hundreds of sites in the area.

Such large collections are “pretty darn rare,” he said. More typical are sites with a few rings such as the one opened to a recent unprecedented tour sponsored by the Legacy Land Trust with the permission of the private property owner. Working collaboratively with landowners, other nonprofits, and other land protection agencies, the Trust has protected more 40,000 acres of scenic vistas, wildlife habitat, and agricultural lands in northern Colorado.
Acquired in 2002 in a partnership between the Trust, Larimer County and the property owner, the Tepee Rings Conservation Easement covers 504 acres of ranch land including a pair of stone circles.

The Tepee Rings Easement also is part of the Laramie Foothills: Mountains to Plains Conservation Project. It so far has protected some 55,000 acres through the combined funding and contributions from Larimer County, the city of Fort Collins, the city of Cheyenne, the Nature Conservancy, the Legacy Land Trust, Great Outdoors Colorado and willing landowners.

LaBelle said the recent finds offer a tantalizing taste of sites not yet discovered.
“It’s underfoot for us to see,” he said.

Over the last few weeks the Poudre River and Big Thompson River have seen increased flow and water depth due to recent heavy rains and snowmelt runoff. These conditions increase hazards for those wishing to […]

Through OneClickdigital patrons of the Wellington Public Library now have access to over 3,200 downloadable audio books. These audio books can be loaded on to most reasonably new MP3 players, iPods, smart phones as well […]

The Board of Larimer County Commissioners will decide on Aug. 2 whether to put a Detox/Mental Facility and Services issue on the November ballot for Larimer County voters. Supporters are encouraged to attend the 9 […]