With the insertion of a golden spike into the railroad tracks in Promontory Summit, Utah 150 years ago, the Central Pacific and Union Pacific Railroad were joined, creating the first transcontinental railroad in the United States. Railroad fans across the country and the world are celebrating the anniversary of the event in 2019.

The days of steam locomotives are long gone but no railroad fan has ever forgotten them. Most vivid in their memories are locomotives known as Big Boys, 25 massive articulated (hinged) locomotives manufactured by the American Locomotive Company of Schenectady, New York. The heaviest engines ever built, they have been called the holy grail of steam. They were nearly 133 feet long, weighed 554 tons and carried 25,000 gallons of water and 28 tons of coal.

Owned by Union Pacific and based in Cheyenne, Wyoming, the Big Boys operated between 1941 and 1959. They were so powerful that extra engines were never needed, even on steep grades. And they were economical, functioning on cheap, low-grade Wyoming coal. The engines were in demand when World War II increased the need for rail transportation. But by 1959, coal and labor costs finally resulted in their replacement with diesel engines. Today only eight of the Big Boys survive and are on display across the United States.

In 2012, the Union Pacific Railroad thought about how to best celebrate the 150th anniversary of the placing of the golden spike. They honored the occasion by restoring one of the Big Boys. After research, they found that No. 4014, housed at the Southern California Chapter of the Railway and Locomotive Historical Society in Pomona, was the best candidate for restoration. By 1962, the engine had covered 1,031,205 miles. In the new century, it was about to be on the road again.

Union Pacific purchased the engine and charged Ed Dickens, a Fort Collins resident and his Heritage Fleet Operations Team with returning the engine to Cheyenne and restoring it. Out of service for 60 years, the task was monumental. The Big Boy began its rebirth with the 1,200-mile trip to the Union Pacific Depot in Cheyenne at 25 miles an hour, obviously not under its own power.

The engine was completely disassembled. New parts had to be built. The project took until 2019 to complete. Dickens described it as the biggest locomotive restoration ever undertaken and “The best public relations ambassador a railroad could envisage. Think about a zoo bringing backing a Tyrannosaurus Rex. How popular would that be? This is the railroad equivalent of that.”

He explained that the steam locomotive program is a source of great pride to Union Pacific employees past and present and expressed his excitement about the opportunity to bring history to life by restoring 4014.

The 4014 will be christened in Cheyenne at 9:30 a.m. on May 4 and leave a half hour later to begin its journey across Wyoming arriving in Ogden, Utah on May 8 to be part of the golden spike ceremony on May 9. It will return to Wyoming by May 19. 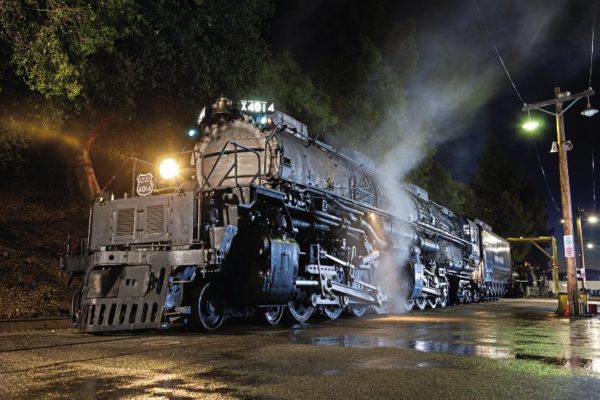 Train buffs and anyone else interested in seeing history come to life can check the Union Pacific website for a full schedule of events and train stops during the summer of 2019.

Material for this article came from train buff Ken Altera and an article by Nigel Devereaux in the August 2018 issue of Railway Magazine.

All aboard the Owl Canyon Cannonball!

January 2, 2018 admin Events Comments Off on All aboard the Owl Canyon Cannonball!

The Owl Canyon Railway at 12841 North County Road 9, Wellington, an ambitious homegrown project spearheaded by Kody Milewski, is offering free holiday train rides to the public on a miniature train, pulled by the […]