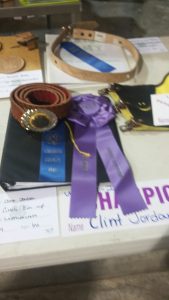 For 2016, Clint worked on a belt to match the holster, carefully carving a filagreed flower design the whole length of the belt. It took him months to complete. After entering the belt in this year’s county fair, Clint planned to give the holster and belt to his dad. Coached by his dad, Brian, Clint has been working in leather for several years and has made wallets and key chains in the course of developing considerable skill as a leather worker.

Clint’s belt was a prize winner at the 2016 Larimer County Fair, earning him a purple ribbon and qualifying his belt to go on to be judged at the Colorado State Fair. But it was not to be. The belt disappeared from a display table at The Ranch in Loveland on Aug. 7. Clint’s mom, Shawn, took the phone call with the bad news.

The theft has been a blow to the whole family. Shawn and Clint both know that he will carve another belt, that the skill he has developed can never be stolen from him. But it hurts to know that someone was capable of such an act.

Not willing to sit by and do nothing, Shawn posted a cash reward for its return, no questions asked. She placed posters in feed stores in the area and contacted 18 pawn shops in Loveland, Fort Collins and Greeley. She has done everything she can think of to do, but she has little hope that the belt will be returned.

She and Clint are grateful for 4-H and the CSU Extension Service, who have made it possible for Clint to enter a photograph of the belt for judging.

“Of course it’s not the same as having the real thing,” Shawn said, “but it is very good of them to do that.” Shawn also complimented the Larimer County Sheriff’s Office for the help they’ve provided in trying to recover the belt.

The photo entry means that Clint may receive a ribbon from the state fair this year after all. But even a first place ribbon can’t replace the belt that he devoted so many hours to carving.

Another good day fighting the Stuart Hole Fire in northwest Larimer County Wednesday has resulted in 80 percent containment of the 227-acre fire, according to the Larimer County Sheriff’s Department. Ground crews were aided again […]

From sketch to reality; Paul Febvre at work

January 31, 2017 Libby James Uncategorized Comments Off on From sketch to reality; Paul Febvre at work

Paul Febvre is a doodler, but he is a doer as well. An engineer by training, he has been building things all his life. Yet for him, the most exciting part of the process is […]

Pre-evacuation notifications have been sent to parts of Glacier View for the area south of County Road 74E, south and east of McNay Hill, ahead of the High Park Fire. The Larimer County Sheriff’s Department […]