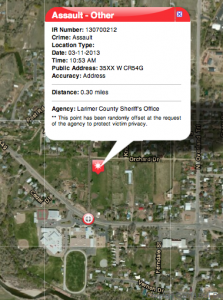 Crime at schools located outside of Fort Collins are indicated on the Larimer County Sheriff Office’s online crime mapping tool at Raidsonline.com. The interactive map is a no-cost service provided by Bair Analytics based in Highlands Ranch. Bair collects the data from Larimer County and turns the department’s calls for service into pinpoints on a map.

A March 11, 2013 assault — a potential violent crime — that occurred at 10:53 a.m. is mapped about 1/3 mile north of Cache la Poudre Elementary along Orchard Drive and labeled: “Assault – Other”. Raidsonline.com describes the Assault – Other label as “the act of causing or attempting to cause bodily harm upon another individual.” The address of the assault is listed as 35XX W. County Road 54G in LaPorte.

Through Colorado Open Records Act requests, North Forty News in November began asking the Larimer County Sheriff’s Office for a list of the agency’s logged calls for service to the two schools between Jan. 1 and Nov. 21, 2013. At no time did the North Forty News ask for the identity of those involved in incidences or crimes.

The two lists — one for each school — contained 256 calls, with the majority (196) being routine patrols known as community policing or directed patrol. The lists also contained incidents serious enough to require reports — two assaults, four thefts and five harassment reports. The two lists also contained five calls to the schools that were redacted (blacked out) so that the calls for service information — call number, case number, dispatch date, call type, location and responding unit ID — could not be read.

In follow-up requests for unredacted calls for service lists, LCSO Records Manager Lorraine Spindler replied in writing on Dec. 2 that “records released from our office must be redacted appropriately under Colorado Revised Statutes.”

North Forty News then followed up with CORA requests asking what public interest would be compromised by release of the information. Later that week the sheriff’s office released the unredacted calls for service to the CLP schools, noting that the information had already been listed in the online LCSO incident blotter updated daily at larimersheriff.org.

The redacted items were labeled “Juvenile Problem,” and were incidents that deputies did not file written reports on.

Staff at CLP Elementary in LaPorte called 911 for a violent student or students at the school on at least two occasions in 2013 and once in 2014. On Nov. 13, 2013, LCSO deputies responded to a student who was acting violently and throwing school property. The student was isolated in a classroom until deputies could arrive. Prior to that, deputies were called during school hours to deal with a student next to or in traffic on County Road 54G, the thoroughfare that runs in front of the school.

On Jan. 15 CLP staff called Larimer County dispatch for assistance with a violent 11-year-old student who was being restrained on a school bus in front of the school. An ambulance was also called, and an LCSO deputy reported to LCSO dispatchers that he had “an 11-year-old in handcuffs.”

No LCSO reports were issued for these three incidents involving the violent student behavior, although each incident was listed for one week as a “Juvenile Problem” in the LCSO’s online incident blotter after which a parent or citizen would need to do a CORA request to get the list of calls.

Subsequent CORA records requests to LCSO for 13 other reported incidents at the CLP schools — assaults, harassments and thefts — resulted in little information.

Spindler would not release eight of the 13 reports requested because they either involved a juvenile or constituted an “unwarranted invasion of personal privacy.”

Spindler cited state statutes in not releasing information on a minor. She forwarded guidelines the department follows, which is that an exception applies when the juvenile “is adjudicated a juvenile delinquent or is subject to a revocation of probation for committing the crime of possession of a handgun by a juvenile or for committing an act that would constitute a class 1, 2, 3, or 4 felony or would constitute any crime that involves the use or possession of a weapon if such act were committed by an adult.”

Spindler said it would take a court order to release the reports the North Forty News requested. The five reports that were released detailed a stolen iPod, a family dispute, a stolen bike and a report of graffiti at the schools.

• Are our schools safe? Parents left out in the cold when it comes to getting details

• A violent student, but that’s about all we know

Firefighters were training for swift water rescue June 4 when a 911 call reported two men had fallen off inner-tubes they were riding and were in the Cache la Poudre River at Picnic Rock. As […]

December 26, 2013 admin Uncategorized Comments Off on Letter: We deserve better

Editor: Editor: Re: “What’s happened to my country?” from North Forty News December, 2013 The writer begins with his great pride in country after seeing the movie, “Captain Phillips,” (Somali pirate attack). He then despairs, […]

The U.S. Forest Service is hosting a free fishing fest for kids on the Canyon Lakes Ranger District of the Roosevelt National Forest on June 4 at the West Lake day-use area, located off Red […]