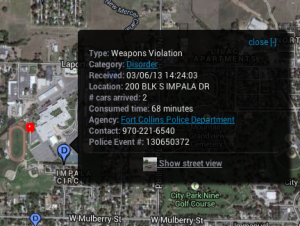 In researching crime at Northern Colorado elementary, middle school and high schools, the North Forty News found that it would be difficult for the average citizen to learn the details of crimes committed on school grounds unless the crime is high-profile, such as a shooting.

On March 6, 2013 there was an incident involving a weapon at Poudre High School serious enough to result in a police report. Using numerous methods including contacting the Fort Collins Police Services and the Poudre School District central offices, it was not possible to determine from available reports how serious the crime was, who committed it, whether the alleged perpetrator was a student at Poudre or another school, or what type of weapon — knife? gun? explosive? — was involved. The search uncovered other serious crimes, but finding information about them was difficult too.

Here are the methods we tried to use to get the information:

City crime maps
The Fort Collins Police Department uses a crime-mapping tool, MyNeighborhoodUpdate.net, that maps calls for service within the city limit and indexes the data by the nature of the call. Almost all incidents involving a response by a patrol officer are mapped, whether or not there was a crime committed.

Two shortcomings of the map in trying to find out about school crime using the MyNeighborhoodUpdate.net service are that the exact address of incidences and serious crimes are not shown — the map only provides the hundred block of the incident — and the online shows only the previous 12 months of calls.

Using the interactive map, it’s not possible to say definitively if a crime occurred at Poudre High School. The school’s mailing address is 201 Impala Drive, but points on the city crime map show items only in the 200 block of S. Impala Drive.

A Tuesday, March 6, 2013 point displayed in the 200 block of Impala Drive has the label “Weapons Violation” with a timestamp of 2:24 p.m. It’s not clear whether the incident was categorized as a violent crime but was categorized under the general label of “Disorder.”

The request asked for call numbers, dates, types and location, and time, which is an indicator of whether a crime or incident occurred during school hours.

Fort Collins Police Services returned a list for Poudre High School at 201 S. Impala Drive and most of the 220 calls — 140 — were directed patrols, also called community policing, in which officers drive by or near the school to observe potential crime.

Written reports were made by responding officers in 47 of the 2013 calls to Poudre for service. Those incidents included motor-vehicle accidents, theft, trespass, criminal mischief, harassment and the March 6, 2013 incident labeled “Weapon Related — menacing, person with gun.” This March 6 case also was displayed on the MyNeighborhoodUpdate.net map, but only as a “Weapons Violation.”

A similar open records request for police calls for service was made for Fort Collins High School and for Greeley West High School, which is in the Greeley School District.

Calls for service lists for Fort Collins High School, which lists its address as 3400 Lambkin Way, showed only two calls for all of 2013, which was confirmed by Fort Collins Police Services records division. One incident was a car tow and the other was an assist to an other agency (which would include medical emergency or ambulance calls). Greeley police reported 220 calls for service to Greeley West High School.

In all, the North Forty News received indexes for calls to seven schools in the Poudre School District and two in the Greeley School District. All but one, Fort Collins High School, showed patrol officers checking up on schools at least every other day, and at some schools, two to three times day.

A juvenile was involved
In a follow-up open records request to Fort Collins police on Jan. 14, the North Forty News requested a copy of the March 6 incident report for the person with a gun at Poudre High School. The request was denied in a letter from Fort Collins Police Services Records Manager Susan Neiman, who cited state statue CRS 19-1-204, which relates to juvenile crime and what information may be released in those cases.

Although in most cases law enforcement cannot release incident or arrest reports related to crimes committed by juveniles, the statute provides exceptions for people under age 18 who commit “an act that would constitute a class 1, 2, 3, or 4 felony or would constitute any crime that involves the use or possession of a weapon if such act were committed by an adult.”

In a follow-up e-mail, the newspaper asked Neiman if a juvenile had been arrested during the March 6 incident. Her office confirmed that there had been an arrest, but would not release any reports or details, maintaining that “records of law enforcement officers concerning juveniles, including identifying information, shall be identified as juvenile records and are confidential and not open to the public.”

State guidelines
Colorado State Attorney General John Suthers set guidelines for school districts to report school-year crimes and violations of student codes of conduct in a 2009 Safe School Reporting Requirement document. The guidelines require “the number of conduct and discipline code violations, including specific information on the number of violations, and actions taken by the school, by category of violation. This report must also specifically identify each conduct and discipline code violation by a student with a disability.”

The Colorado Department of Education is charged with assembling the lengthy documents — Poudre School District’s was 185 pages — into a database that can be viewed at their website.

Poudre School District’s annual Safety & Discipline Report, sent to the Colorado Department of Education for the 2012-2013 school year and obtained via e-mail from the communications office at Poudre School District, includes conduct and discipline code violations involving students in every school. The report listed four felonies committed by students at Poudre High School, two under the “Dangerous Weapons” category and two under “Other felony.”

That same report includes information about any firearm expulsions, as required by the federal Gun Free Act of 1994. The report includes a separate category for firearms expulsions involving special education students. Categories are broken down into handgun, rifle/shotgun and other.
The report indicates that no Poudre School District students were expelled or disciplined for bringing a firearm to school.

So our long trail of paperwork led us to only scant details and raised more questions about severe crime than we had going in: Was the weapon something as simple as a pocketknife? Was anyone hurt? Did a student or teacher report the incident? Was a student disciplined, expelled or tried?

Since Fort Collins Police Services won’t provide any details or even redacted paperwork about this juvenile arrest, there is no way to independently verify with certainty what this felony involved — including type of weapon, whether it involved a student, the number and identity of the victims, who reported the crime and whether the person was charged or tried for the crime.
Following the minimal breadcrumbs found in records we were provided led us to these scant details:

Poudre School District records submitted to the Colorado Department of Education also show that during the 2012-2013 school year no students were disciplined or expelled for bringing a firearm to school.

• Are our schools safe? Parents left out in the cold when it comes to getting details

• A violent student, but that’s about all we know

America: Yesterday, Today and Forever is the theme of this year’s Fourth of July parade in Wellington. Participants line up at Wellington Boulevard and Cleveland Ave. between 7 and 9:30 a.m. Three awards will be […]

A prescribed burn has been scheduled to take place on Oct. 26 at the Ben Delatour Boy Scout Ranch in Red Feather Lakes. The Nature Conservancy and partners will be implementing the burn as part […]