Meat sucks. But wait! Before you throw this newspaper or your tablet/computer across the room in protest of what you’re assuming must be some piece of vegan dieting propaganda, just hear me out. It’s not so much that meat itself sucks, it’s more in the way in which meat has come to be processed in this country that, sadly, in fact, sucks. What makes it suck you ask?  Two main factors: consolidation and health.

Business Insider published an article in 2018 highlighting many of the unsafe and unhealthy conditions inside today’s slaughterhouses. Workers stand in bloody cramped spaces, inhaling raw meat and chemicals for long hours. Injuries are suffered regularly from dangerous equipment, resulting in crushed and severed limbs, and in some cases, even death. So, do you think if we had to see where our meat was processed, we’d still want to eat it?

Additionally, Reuters published an article this summer stating that America has seen a consolidation of meat processing plants, narrowed down to four main plants to be exact: JBS USA, Tyson Foods Inc, Cargill Inc, and National Beef Packing Company collectively produce 85% of the beef in this country. This consolidation was largely unnoticed until the entrance of COVID-19, which caused meat packaging plants all across the nation to close doors, leaving ranchers with little options on where to send their cattle.

Furthermore, when JBS was forced to close many of its plants this year due to a cyber-attack, it once again put ranchers in a difficult position and put light on the cracks in the system. It’s becoming easier to identify the many outlying problems within the industry but are there no solutions?  We know the villains, but who are the heroes in this story?

“COVID exposed the fragility of this industrial food system, when JBS had an outbreak and they had to shut that down, the stores didn’t have product for months. The cattle go into these facilities by the semi-load but when they closed, all the cattle got diverted to the smaller places like we were using, and it created a logjam in the system.”

That’s Josh Ciardullo, owner and operator of Ciardullo Ranch based in Wellington, CO. Josh and his wife Erica recently sat down with North Forty News to talk a little about the journey to building their 33-acre grass-fed, pasture-raised sustainable and regenerative Black Angus operation. If there are to be heroes in this tale at all, Josh and Erica Ciardullo are very much it. In addition to sharing their inspiring story, they also explained some of the obstacles they and fellow ranchers are currently up against.

“It’s gotten to the point that if you want to process steers you gotta call these smaller processors two years in advance. It’s not that there are no cattle to eat, it’s just that you can’t get them through. But to Colorado’s credit, they just signed that Ranch to Plate Act.”

That’s true; back in April of this year, Colorado’s Ranch to Plate Act was signed into law and what this new legislation will allow for is smaller processing operations to sell meat directly to consumers without necessarily being USDA approved. The Act is important to the Ciardullo family because now rather than having to wait two years in line to have steers processed, smaller operations have created more options, eliminated the stress of the “logjam” in the system, and allows for the Ciardullo’s to get back to what they do best, which is serving up a healthy plate of beef!

One of Josh’s better-known catchphrases is, “Good beef isn’t cheap and cheap beef isn’t good.”  His message to the public is simple: “If you want really crappy omega 6 filled junky beef that’s going to raise your cholesterol and be littered with toxins, you get it 99 cents per pound. But if you want stuff that’s raised the right way and it’ll nourish your body with omega 3’s and good fats, good nutrients you buy it local.”

While the Ranch to Plate Act has helped to improve slaughterhouse consolidation, it still doesn’t solve the issue of quality, both inside the facilities and inside the meat itself. Just because meat sits conveniently in the grocery stores, that doesn’t necessarily guarantee it’s healthy, and even if it says so on the package, wouldn’t it really be better if we could know for sure? How many times have corporations lied to the American consumer? That’s why ranchers like the Ciardullos are so important; they understand why quality meat is crucial for good health and that’s precisely why they make it their priority to connect their customers to the food source, even going so far as to invite people to watch in on the process via social media.

“We like to say we have an open gate policy at the ranch. We have so many people that reach out and comment and want to interact, they’re not just ‘liking’ a post but actually commenting and they follow along, almost like a tv show. So, to be able to purchase beef from someone who you watched birth the calves, you feel so connected to the whole process and that’s our main passion, connecting people to that food source.”

For the Ciardullo’s, the dream started back in 2016; at the time they were living in Denver, Erica a schoolteacher, and Josh an active firefighter until a neck injury forced Josh to retire earlier than expected. That’s when they decided to take misfortune and turn it into opportunity by purchasing land in Wellington and escaping the city life. Once settled on the land, it was then that Josh developed a newfound appreciation for a simpler way of life, a return to the old. Though you could say Josh and Erica always valued healthy eating, it wasn’t until Josh started lending a hand with his neighbor’s cattle that he got the idea of purchasing a few black Angus steers of his own, an idea that at first took a little convincing for Erica.

“I’ll never forget, he came home one day and said, ‘I think I want to buy some steers’ and I was like ‘what?’  My first thought was like, how are you going to manage steers when you’ve never done it before?”

However, with some time and reassurance, Josh was able to show Erica that not only was he serious, but he was also able to be entirely self-taught through utilizing library books and Youtube videos. Before they knew it, they, along with their teenage son, Henry, had made the full transition into ranch life, eventually even expanding beyond their Wellington property to leasing the 500-acre Sylvan Dale Ranch in Loveland.

Today, between both ranches, they’ve grown from their original 3 cattle to now overseeing roughly 40 black Angus steers, along with chickens, sheep, and livestock dogs Marv, Mosey, and Osmond. Their goal is to continue raising animals as if it were 10,000 years ago and instead of working against nature, they set out to mimic what would take place in their absence.

Their story is so important because not only is it a direct response to a negligent corporate system, but because it embodies the American spirit or certainly what it once was, this idea of taking a risk on a dream rather than accepting things as they are; this entire nation was founded on the idea of never accepting the status quo and always reserving the right to break out alone and be the individual, to flip the script and pave your own way. So much of what this country once was has been lost to corporations, whether through convenience or outsourcing to other countries entirely, but despite it all, one thing is for sure, you can still find traces of the American spirit peppered throughout Northern Colorado. You can still find hardworking people carrying on traditions of old; hardworking Americans just like the Ciardullo family, honoring the land and their word, and working hard to ensure America’s meat doesn’t suck. 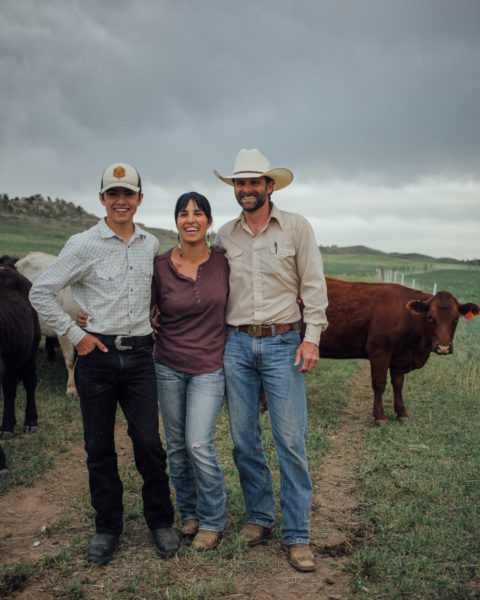 If you’re interested in learning more about the Ciardullo Ranch and more about their journey to supply Northern Colorado with the best beef possible, please check them out at ciardulloranch.com. From the website, you can follow them on social media, as well as direct purchase your choice of beef, but that’s not all, they also offer lamb, whole bean coffee, and pretty cool apparel to help show your support. Lastly, keep an eye out for Ciardullo beef making a special appearance at the Still Whiskey Steaks in Fort Collins this Fall for their Rancher’s Dinner showcase.