I used to think I knew robins. Doesn’t everybody?

Beloved sign of spring, hop about on our lawns, eat worms, raise babies right in our yards or even in the wreath on the door, splash joyfully in the birdbath.

Yep, those are the robins we all know and love.

I didn’t give them a second thought.

Even in my twenties, when I already thought of myself as a birder, I was so busy hurrying around with binoculars to ID singing orioles, tanagers, rose-breasted grosbeaks, vireos and those maddening warblers, that robins were the last thing on my mind.

I proudly announced to folks at the nearby nature center which singers I’d heard—the rarer, the better, of course.

But there was one singer that eluded me. The very first to start singing, when it was still so dark I had trouble finding my socks.

I heard the same song in my yard, off and on all day. And a softer chorus at twilight, singing a vespers version of that long, chirrupy song.

Oh, I tried to find the singer. But every time I snuck up on the tree in which it was singing, all I saw was a robin.

My mysterious singer must be a little sneaky bird, I figured. Or a green one, camouflaged among the leaves.

I was sure I had some braggable exotic, even though I seemed to hear the same song everywhere.

Finally, just as I lifted my binoculars one day—“Bah, just a robin”—the orange-breasted bird threw back its head, opened its bill, and sang.

I instantly changed my tune. Instead of bragging about the unusual birds I’d heard, I started asking everyone I ran into, “Have you ever listened to a robin singing?” Then I’d proudly point (yeah, just can’t stamp out that ego thing), and say, “That’s a robin!”

Our common and abundant backyard bird—a member of the renowned-for-song Thrush Family, which should’ve been my big clue—is brightening the mornings these days as birdsong kicks into high gear.

“Early bird gets the worm”? Whoever came up with that saying must’ve had robins in mind.  These days, that’s, oh, about 4:30 a.m., and it’ll get earlier as the days get longer.

Super-sensitive to light, robin brains are geared to go into wakeup mode long before the sun actually shows its face.

A few weeks ago, a neighbor friend came to visit, still excited about the fireball meteor that’d gone over (video here: https://www.facebook.com/EstesParkNews/videos/2145319702162946/).

“How ’bout that sonic boom the other night?! And that bright flash—my whole house lit up!”

I was amazed. But, “Slept right through it,” I had to admit, feeling like a dolt.

Usually, the slightest out-of-the-ordinary noise wakes me up instantly…and then I just as quickly go back to sleep. The house creaking, the wind rearranging porch furniture, the rustlings that let me know we have a mouse in the kitchen: as soon as my sleepy brain identifies the sound, I’m back to Dreamland. (Except for, heart pounding, “Psst, Matt!“—un-ignorable nudge—“I think there’s a bear on the porch!” Which, thankfully, I don’t hear often.)

I’m still wondering how I missed the meteor and its boom.

But, after marveling over our friend’s rarest-of-the-rare sighting of that fireball, of course I had to counter (ego, y’know).

“Hey, have you heard the robins?” 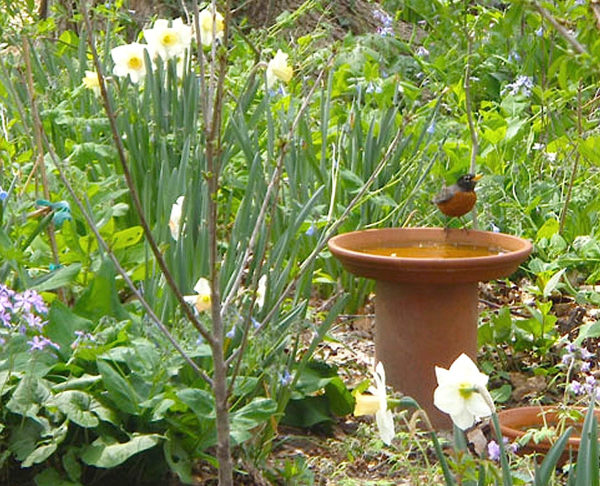 Robins used to be rare birds at feeders, but they’re learning fast that feeders mean food. Hosting a robin—or a bunch of robins—is becoming way more common, especially during migration…or in a Mother’s Day snowstorm.

Oh, I was thrilled when the first one showed up. Oh boy, a robin! At the feeder! What an honor!

But robins have a dark side.

An hour or two later, when the regular feeder birds arrived, our beloved icon of spring became a holy terror. “You see that? He just stabbed that finch!”

I’d never seen anything run off a jay before, other than a squirrel, but the big blue birds didn’t even put up a fight. They just turned tail and fled when the robin came around.

As with other bird friends, robins stop visiting feeders once they’re tending a family and natural food is abundant. But a birdbath—where sharing rather than stabbing is the norm—will keep them coming back all summer.

BY SALLY ROTH North Forty News Halloween is coming, but my favorite trick-or-treater isn’t interested in candy bars. No Kit Kats, no Reese’s peanut butter cups, not even the mini Snickers I can’t resist. This […]

by Sally Roth Hard to miss the cheerful sunflowers that bloom throughout NOCO, along roadsides, at the edges of farm fields, and in empty lots! These shorter, smaller-flowered sunflowers are our native species—prairie sunflower (Helianthus […]

August 18, 2017 Matt Bartmann Outdoors Comments Off on Birds behind schedule

The May snowstorm caused a lot of bird nest failures. Many birds were on their nests, incubating eggs. Others were busy feeding hatchlings. Three or more feet of snow fell, and the parents couldn’t keep […]