On January 7, a light went out in Fort Collins. Andrew Lawrence Stellmack, a 31-year-old female illusionist, artist, friend, and son, lost a short battle with a rare and aggressive form of cancer. In Northern Colorado, just being a gay drag queen would have been enough to make Andrew memorable. Those who knew him remember his youthful face, complete with radiant skin and high cheekbones. They remember the way he walked—rather, the way he bobbed and floated like a fairy. He brought out a sparkle in everyone, even in his low moods, even when he complained.
Most people who knew Andrew also knew Audri Fenmore, his twin drag persona. She was born on stage in 2012 at Choice City Shots, then the only gar bay in town. Shots hosted a drag show called Triple Threat, which featured a troupe of Denver performers. Seeing with friend and collaborator Steven Wilson that none of the performers were local, Andrew created Audri Fenmore and threw her wig in the ring.
“Andrew was a hit at Triple Threat because he brought something different to the shows: atypical costumes and song choices,” Wilson said. “He swerved away from the typical pop diva Beyoncé/Britney/JLo/Gaga stuff.”
Andrew took his character seriously, and did his best to fully become her with each performance. When performing guest spots with the Blue Stocking Burly Q burlesque troupe, he stayed in character even while he sat in the audience watching the other girls perform.
After Triple Threat ended, Andrew took over the shows and the spotlight shown more brightly than ever on Audri. He often referred to himself as Fort Collins’ Number 1 Drag Queen, much to the chagrin of the other performers in the scene. Eventually jealousy and gossip poisoned the fun, and the show was taken out of Andrew and Audri’s hands. Feeling hurt and scapegoated by the very scene he helped nurture and grow, he retired from drag altogether, only performing a handful of times in the years following Shots closure.
This feeling of separation and being on the outside, even on the fringe, is what influenced Andrew to classify himself as a ‘female illusionist’ rather than a drag queen. Andrew was different, and so was Audri, but his ostracization from the drag community still stung.
In the summer of 2015, Northern Colorado Pride asked if he would put the wig back on and become Audri again for a performance at the Downtown Artery. 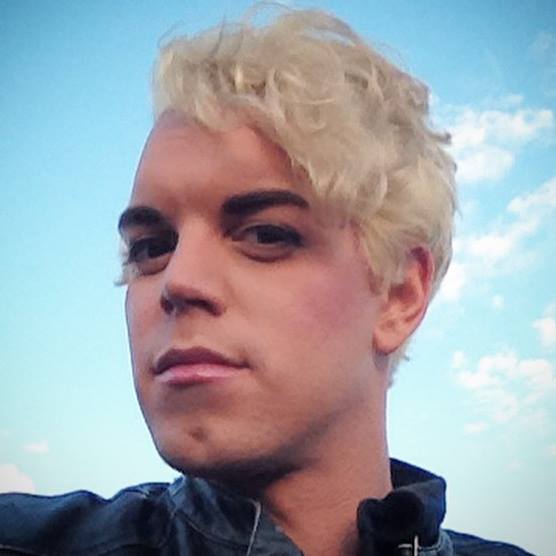 While deciding whether or not to come out of retirement, he wrote on his Facebook, “I am at a point where I have let go of any ill feelings or resentments I may have felt towards certain people in the past, and look forward to creating new bonds of friendships that may have been damaged before.”
He then asked who would like to see a comeback from Audri. The post got over 50 likes and almost 20 encouraging comments.
Audri did the show.
It was only four months after that performance that Andrew was diagnosed with terminal cancer. His health deteriorated quickly, and neither he nor Audri found the strength to perform again.
Back in upstate New York where he was raised, years before he became Audri, Andrew studied fine arts at SUNY Oswego. Most of his art from that time is of Disney characters as circus performers with freakish alterations. Belle with a beard, Bambi with eight eyes, the stepsisters as conjoined twins. One of his characters is half Peter Pan, half Tinkerbell. Like Peter Pan, he never got to grow up. Like Tinkerbell, he dusted magic glitter all across Fort Collins. His sparkle and shine will never be forgotten.

See yourself? Check out our late nights from 100 Octane, Jax Fish House and more. More to come soon! Did you like what you just read? Show your support for Local Journalism by helping us […]

November 23, 2015 admin Uncategorized Comments Off on Voices of Fort Collins

By: Rebecca LaPole Voices on radio help us navigate traffic, warn us of incoming weather, tell us who won the game, and keep us entertained during our commute. These same voices can also command our […]

Northern California based singer songwriter Brett Dennen performed a solo set on Friday Night at the Armory in Downtown Fort Collins to a sold out crowd comprised of many ardent female followers, some middle-aged couples and a […]