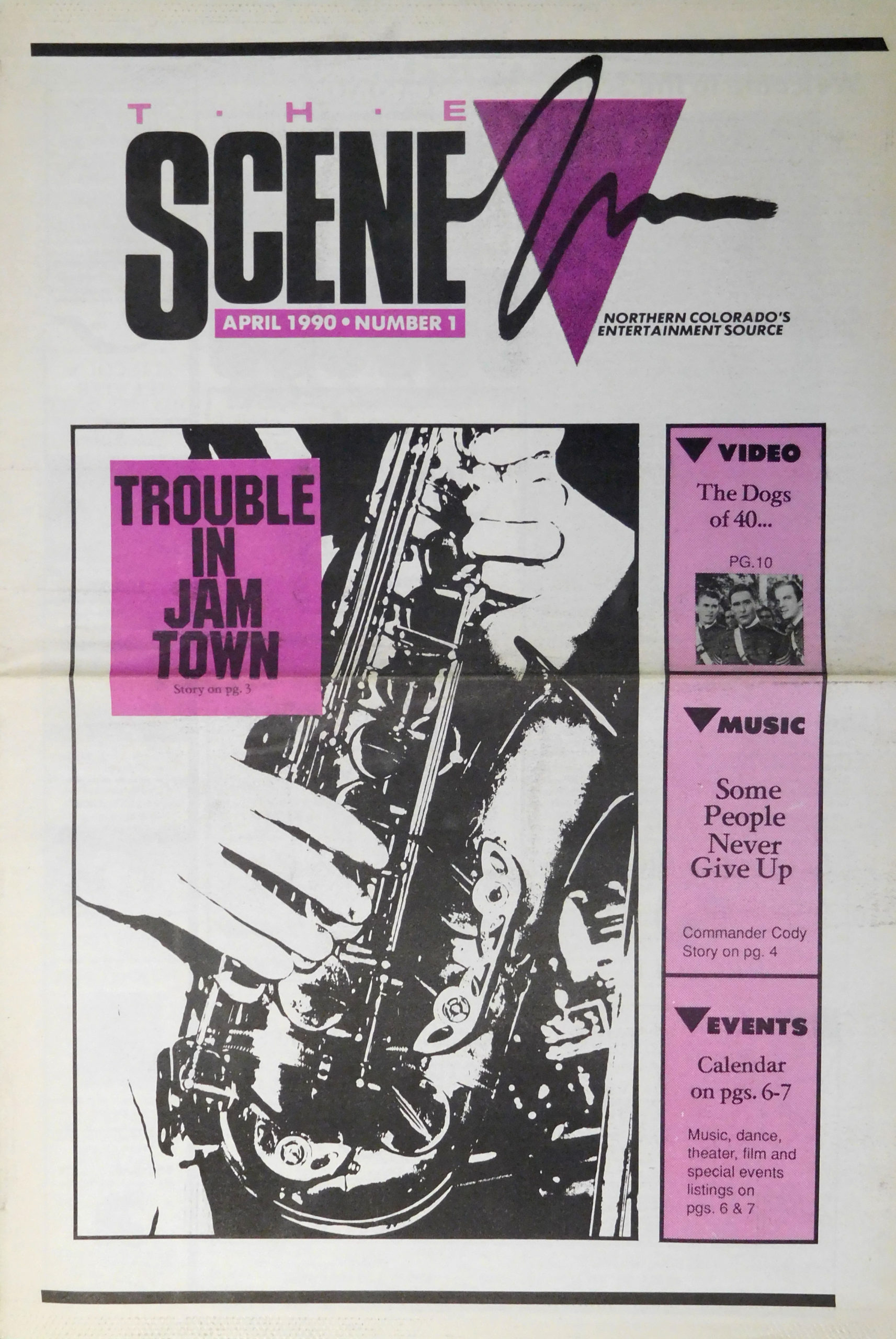 Recently I had the opportunity to write for North Forty News about some creative work I’ve been doing on Youtube. Or to be more specific, I wrote a piece for the weekly New SCENE section of North Forty News. It was a thrill to see my article in print, on paper and online, no less.

This is a thrill I knew thirty years ago when some partners and I rolled out the very first issue of The Scene in April 1990. I was the editor, wrote a bunch of the articles and publication day was always momentous. As momentous, in some ways, as seeing my article in print many years later in the weekly New SCENE. It made me look back at what was happening in the Fort Collins area “scene” so long ago.

When The Scene debuted as a monthly entertainment newspaper in 1990, the cover story was titled “Trouble in Jam Town” and recounted the various nightclubs in the area that were hosting their own versions of a popular idea in Fort Collins at the time, “Blue Monday,” a club jam of area musicians that made one of the dullest days of the week one of the coolest.

Other articles included a feature on a Fort Collins filmmaker named Kavin King, a profile on artist Theresa Rose, a restaurant review of Hickory House South and concert reviews of Lyle Lovett, Big Twist and the Mellow Fellows and Peter Murphy. Naturally, I wrote about music. I interviewed George Frayne, otherwise known as Commander Cody, who had an upcoming
appearance at Gators and about “a strong sweet voice emerging from the music scene in Fort Collins,” Liz Barnez.

In the introduction of that first Scene issue, my partners and I wrote: “If you think there isn’t enough to do in Fort Collins, you have a small mind. Or you’re lazy. Or you’re dead asleep.” Thirty years later, I might not be so aggressive with my language maybe and it isn’t about just Fort Collins — it’s about the whole area — but the message is the same: we live in a vibrant and exciting place.

It’s been rough throttling back in these days of Covid-19 and no one knows what lies ahead. But it makes me just a little more hopeful that local news carries on. It’s OK that the weekly New SCENE is now a section of North Forty News. Before The Scene was a newspaper in 1990, it began as a section in the upstart independent newspaper The Oracle. Now it still survives in another independent newspaper and has something we never dreamed of when we started The Scene: weekly publication.

Watch these pages in the future. Find out what’s going on. Support local journalism. These are things that help keep us going, thirty years ago and now.

Tim Van Schmidt is a writer and photographer based in Fort Collins, Colorado. Hear the interview with George Frayne, AKA Commander Cody, conducted for the first issue of The Scene, on Youtube at “Time Capsules by Tim Van Schmidt.”
—
See my all-new exhibit:
“The 70s Time Capsules!”
www.ItsAboutRockAndRoll.com
It’s an Online Museum of Music…and more!!