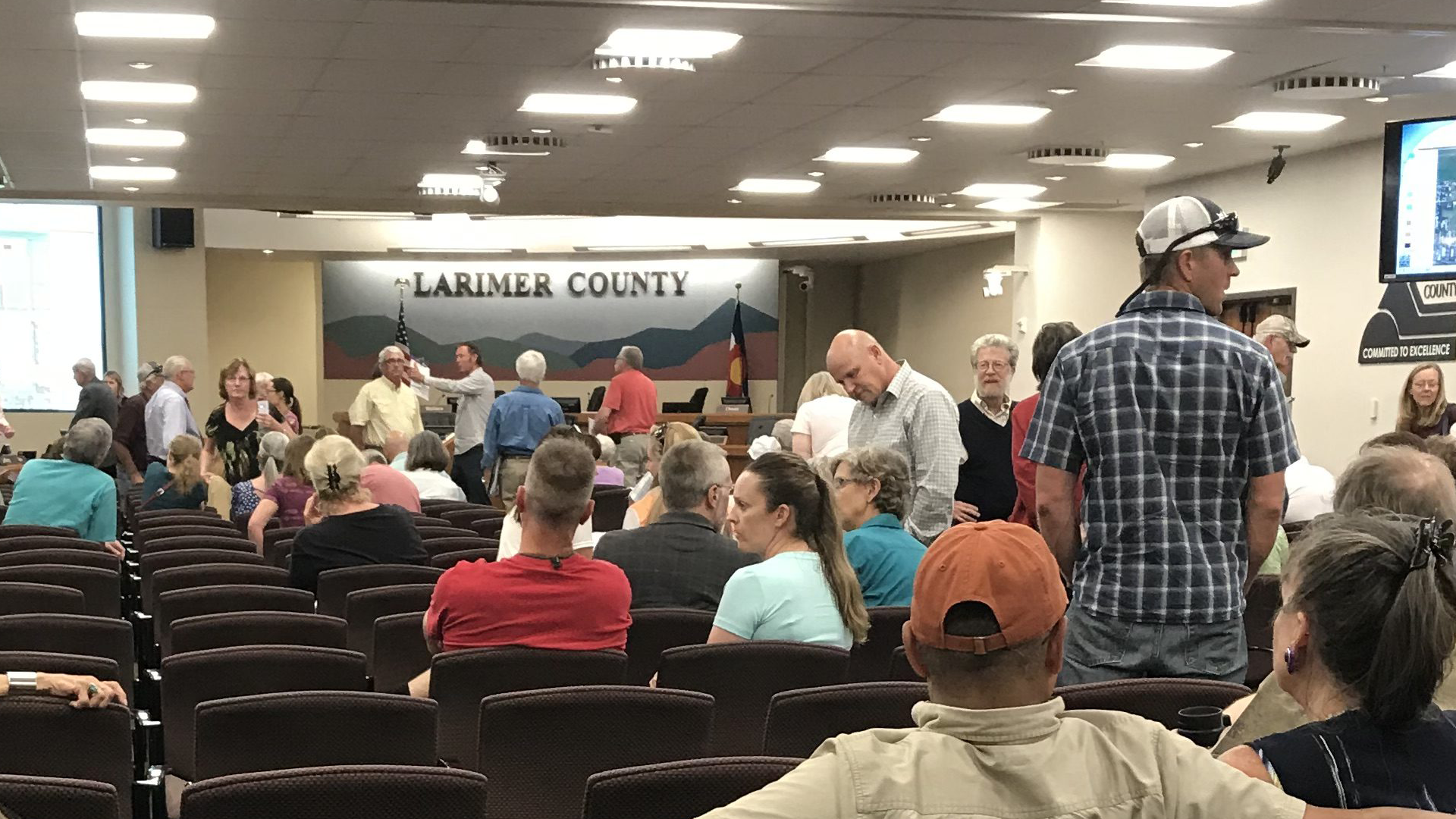 The Larimer County Planning Commission did not weigh in on the fate of Loveland Ready-Mix Concrete’s request for a special review for open mining of sand and gravel, on-site material processing and a concrete batch plant on 123 acres of land adjacent to downtown LaPorte on August 15.

By 6:15 p.m., the Commissioners’ Hearing Room in the Larimer County Courthouse, with a capacity of 299, was filling fast and by 10 p.m. when Commission Chair Jeff Jensen closed the meeting and called for a continuance on August 22, only a few attendees had left. Nearly 60 people had signed up to make a public comment on the review, so many that two-thirds of them did not have a chance for their two minutes at the microphone and will return next week to have their say.

After that process is complete, Loveland Ready-Mix will have a chance to make a rebuttal before the commissioners will hold a public discussion followed by their vote to recommend approval or denial to the County Commissioners. The Commissioners will have the final say on this matter, close to the hearts of nearly all LaPorte residents.

Chair Jensen explained that more than 1700 pages of comments, most of them in opposition to the review, had been received. He described them as “intense.”

The August 15 meeting began with a 30-minute presentation by Senior Larimer County Planner Rob Helmick, delving into details such as traffic safety, noise, dust, air and water quality, impact on property values, schools, lifestyle and character of the community, concluding that the mining operation can be compatible with the community. “LAPAC (the LaPorte group charged with maintaining the character of the small community) has concluded the opposite,” he said. “We look at it from a technical standpoint and LaPorte residents look at it from a different point of view.” Helmick sited 39 conditions of approval listed in a report.

Representatives of Loveland Ready-Mix, including consultants and owners Brad and Stephanie Fancher, then shared their vision for the operation and detailed the efforts they will make to address community concerns. They addressed noise, dust, ground water issues, environmental, reclamation and safety concerns, and expressed their desire to hire locally and be a benefit to the community.

Following a short break, John Barth, an attorney representing No LaPorte Gravel went into detail about the reasons for the community’s opposition to the project. He asserted that the batch plant could not be considered an “accessory use,” that access to the plant and a timetable for the operation were not clearly defined and suggested that the LAPAC board was the most knowledgeable on the issue. Recently, the LAPAC board voted 4-2 in favor of denying the operation. Barth suggested that planning commission members should pay close attention to LAPAC’s decision.

During the public comment period that followed, Jensen held the speakers strictly to the two-minute time limit. While most were strongly opposed to the mining operation, several spoke in favor, pointing out that LRM was a good company who cared about the environment and the community and would in the end be an asset. Tom Houston, who has farmed for 20 years close to the LRM plant in Loveland said, “LRM does it right. You should be glad they are the ones doing this.” He pointed out that the value of his home has doubled and that there are times when farmers create more dust and noise than a mining operation.

Comments continued from a speaker as young as 13, concerned about issues affecting students in LaPorte schools to input from residents of 40 years and longer. And it will continue on Wednesday night, August 22, same time, same place, and likely the same committed crowd.

by Sparge Brewing - 5 hours ago