Food Bank for Larimer County’s Chief Development Officer Heather Buoniconti is asking the question that seems to be echoing throughout the entire nation.

“Nobody should be hungry in this country, so how do we move that forward?” Buoniconti said in a recent interview with North Forty News.

In an effort to answer that very question, Food Bank for Larimer County recently participated in the White House Conference on Hunger, Nutrition and Health, which took place on Wednesday, September 28 in Washington D.C. The conference consisted of three in-person listening sessions that were focused on learning directly from individuals facing food insecurity what exactly they would need to not only survive but thrive by the year 2030.

“We’re (The Food Bank) seeing the problem firsthand because we’re right there with the people who are working so hard to make ends meet and might just still be struggling from the pandemic,” Buoniconti said. “With rising costs and inflation, even as fuel prices are starting to come back down, there are still so many increased costs, and it is not something that one organization can solve alone; hunger is a pervasive challenge across our country, and it needs different factors involved and it needs Government resources and people to make decisions at a higher level to help support our families.”

According to a recent news release, the White House called upon Feeding America earlier this year to compile recommendations for ending hunger from those already struggling to provide food for their households. Feeding America then set out to conduct 100 in-person listening sessions nationwide, and with The Food Bank for Larimer County being tied into that network, they were awarded grant funding to hold roundtable events within Larimer County to help provide vital information. In total, The Food Bank had 21 people participate within two sessions with one being in English and another in Spanish.

Steven Barry who serves as The Food Bank for Larimer County’s communication manager helped facilitate one of the Spanish listening sessions in Larimer County and said that the overall underlying message they received was that people are simply struggling.

“We heard that people are relying on the Food Bank and charitable food in general to a greater extent than they have been in previous years based on our experience as an organization,” Barry said. “Things like the cost of housing, cost of health care, food, and general inflation has affected people’s ability to feel comfortable like they’re going to make it to the end of the month with the money they have.”

Barry said that they’re seeing client visits to the Food Bank’s Fresh Food Share pantries in Fort Collins and Loveland rise from 8,965 visits during January of this year to 11,831 visits in August. Barry said that while it was important to gain a better understanding of people’s needs, it was at the same time challenging to hear the extent of hardships.

“People are looking for dignity and stability,” Barry said. “No one should have to feel like they are wondering where their next meal is going to come from, no matter what their situation is, everyone deserves access to a sufficient quantity of nutritious food for their household.  It was hard to hear that people are suffering. We’re hopeful that the conference will yield some additional action.”

Clients shared that as a result of rising housing and healthcare costs, along with historic inflation, have led them to rely on the Food Bank for an increasing percentage of their households’ total food supply. In the past, clients have said the Food Bank provided roughly 30 percent of the food they needed each month. According to the news release, those estimates have increased to 50 or 75 percent, while some clients have shared that the Food Bank has become their only source of reliable nutrition.

“The cost of living is more than many families can bear right now,” Food Bank for Larimer County CEO Amy Pezzani said in a news release. “We are incredibly thankful that our clients were willing to share their experiences with us, and we’re proud that their recommendations could play a part in formulating a new plan of action to work toward ending hunger in the United States.”

The White House conference was only the second such event in U.S. history. The first, the White House Conference on Food, Nutrition, and Health, was held in 1969 and led to the creation of now-critical food security programs, including WIC (officially called the Special Supplemental Nutrition Program for Women, Infants, and Children) and school lunches. In addition to mentioning the significance of the timeline of the conference, Buoniconti said the concern of subsidized meals for school children was a focal point throughout the conference, as well.

“It’s an extraordinary movement that’s happening right now, there hasn’t been a conference like this in more than 50 years and I think that’s really telling of what’s going on in our economy and our communities,” Buoniconti said. “At the conference, they spoke a lot about subsidized lunches for all school children, that’s huge because some of our children might just be right on that line or some of their families and might not be able to get that assistance and when we were in the pandemic that might have been a resource that really helped enrich their families but now, they are no longer receiving.”

According to the news release, the USDA’s announcement on September 14 that it would be providing $1.5 billion in funding to food banks across the nation, should give the Food Bank for Larimer County additional funds and help to better assist in delivering more locally produced food to their clients. Buoniconti said that while it will likely take some time before new programs start to surface from this year’s conference, in addition to the federal government offering additional support, she’s hopeful that new attention and policies will ultimately result from the efforts of the conference.

“I think the main thing is that on a national level we’re just recognizing the challenges and accepting that hunger can’t be this isolated issue, nor can poverty or other systemic issues that we’re facing as a country, so I’m really hoping that legislation comes out of this conference,” Buoniconti said. “Again, I think children are a really important issue; there are so many restrictions and requirements that need to be met when we do a child feeding program and a lot of those requirements were waved during the pandemic, which allowed us to better set up those programs. If we could better look at things like that and reconsider whether we need so many levels of detailed blocks and look at it through a different lens, then what could we do and how could we be more successful, but we can’t make those decisions, that has to come from state and federal lawmakers, so that’s what I’m really hoping this brings attention to.”

For anyone interested in supporting the Food Bank’s hunger-relief efforts in Larimer County, volunteer options are widely available, as well as financial contributions or donations of the whole, frozen turkeys, as the Food Bank is already collecting frozen birds for its annual holiday turkey drive in anticipation of yet another year of high demand. The turkeys will be distributed starting November 18 to families identified by area schools and nonprofits. To learn more, visit foodbanklarimer.org. 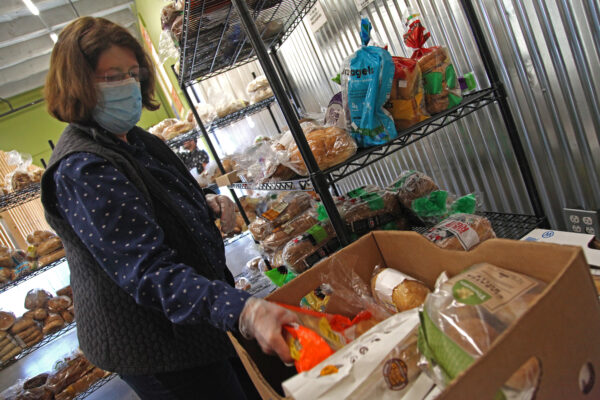