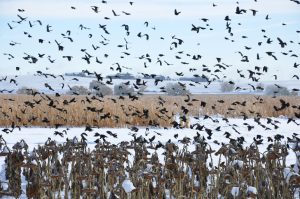 After 40 years of using a poison that targets flocks of starlings that plague feedlots and crops, the Animal and Plant Health Inspection Service — Wildlife Services division of the U.S. Department of Agriculture is still studying the avicide DRC-1339 to see if it works.

At least, that’s the story behind the killing of hundreds, if not thousands of starlings last year at Horton Feedlot northeast of Wellington, which literally covered nearby properties in dead birds, neighbors said.

An official from the agency’s National Wildlife Research Center in Fort Collins said she was surprised that a number of birds actually landed on neighboring properties, given the fact that the poison usually acts within 12 hours, but it was possible.

It was also an unpleasant surprise to several landowners near the feedlot, though it could have been worse. While Wildlife Services officials won’t discuss specifics about the study, claiming the study’s dual nature in working with private landowners precluded the release of the information, flocks as large as 350,000 birds were included in the five-state study.

“My kids were crying and freaking out about it. It was like Armageddon (at nearby properties),” said Mary Jo Upham. She said most of the birds were starlings, but there were also dead sparrows and her cat, which was older but healthy, died three days after eating one of the dead starlings.

Mike Yeary, Director of USDA’s Colorado Wildlife Services, said that was not possible due to the efficiency of the poison used, DRC-1339. Essentially, this poison coats internal organs of the birds, leading to their failure, but is quickly excreted. Because the poison is fast acting and excreted, Wildlife Services officials said, there is far less chance of poisoning predator species, when compared to more common poisons, which kill by inducing internal bleeding.

“There’s only been one instance of secondary poisoning documented,” Yeary said. He said that instance was a case in which a crow ate a pigeon that still had undigested poisoned grain in its digestive tract.

As difficult as statistics that clean are to believe, the Wildlife Services own 2003 study noted that cats could be subjected to toxic levels of the avicide if they consumed enough poisoned grain. Other bird species are also susceptible to the poison, and eliminating their exposure is largely a function of field tactics, such as only poisoning grains in locations that are frequented only by the targeted species.

Yeary said that large starling flocks can consume up to 200 pounds of livestock feed daily, which tends to occur in colder months, when the birds congregate in larger flocks. This particular study — during which birds were poisoned on or near Horton Feedlot in December 2012 and April 2013 — was conducted to study the reduction of harmful bacteria from the subsequent reduction of bird guano in 35 lots (half of them control lots) in Colorado, Texas, Missouri, Iowa and Kansas, said Gail Keirn, spokeswoman for the Wildlife Service’s National Wildlife Research Center in Fort Collins.

“This study was a little different in that it included both the operational and scientific sides of our organization,” Keirn said. Because it included the operational side, she said, the agency does not believe that it can release specifics about the number of birds killed for the Horton Feedlot study until it is complete. Representatives of the feedlot did not return calls for comment.
Keirn said the study is measuring bacterial levels in feed, water and cattle fecal matter before flock reduction and after flock reductions. A previous study did find a reduction in the amount of Salmonella when studying starling flocks near cattle feedlots, she noted.

“These are bacteria that have an effect on humans that we aren’t able to reduce that effectively,” she said. “We realize many people may not fully understand the role wildlife can play in the spread of emerging infectious diseases and welcome opportunities to share information about our work.”

Larimer County breweries generated lots of jobs, but at a cost

December 28, 2011 admin Uncategorized Comments Off on Larimer County breweries generated lots of jobs, but at a cost

The black-footed ferret: Flagship species for the prairie ecosystem

September 15, 2011 admin Uncategorized Comments Off on The black-footed ferret: Flagship species for the prairie ecosystem

If Helen of Troy’s beauty once “launched a thousand ships and burnt the topless towers of Ilium,” the U.S. Fish and Wildlife Service hopes that the charm of the black-footed ferret’s whiskered nose and masked […]

The sky is alive with biological rainmakers

January 23, 2013 admin Uncategorized Comments Off on The sky is alive with biological rainmakers

In 1937, Donald Barber thought space aliens had fallen from the sky and damaged his astronomical photographs. He discovered dark specks on his glass plates later identified by biologists as unknown bacteria obviously capable of […]