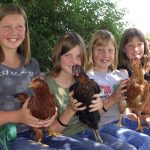 The 4-H program in Larimer County doesn’t need a marketing firm to recruit new members. It has the Lee family.

On a recent summer morning, the Lees were seated around a very long table — a necessity, with eight children in the family. The aroma of freshly baked cinnamon rolls, made by son Austin, filled the air.

This reporter was invited to sit on a lovely bench that had been refinished and upholstered by son Clancey. Outside the window, several fat steers looked over the fence, and a handful of multi-colored chickens pecked in the yard.

What do cinnamon rolls, upholstery, steers and chickens have in common? The answer is easy: 4-H. The Lee family is so enthusiastic about 4-H that they have become an ad hoc promotional team for the Larimer County program.

“We just want to encourage more kids to be in 4-H,” said Kelly, mother of the family.
Her husband Joe added, “A lot of people think 4-H is just animals, but it’s full of opportunities.”

It’s also a great chance to expand one’s horizons. For instance, three of the four Lee sons have done cooking or baking projects for the county fair. Joe was a 4-Her himself as a boy, and that’s where he learned how to bake. “You’re going to have to cook sooner or later,” he said.

The 4-H tradition has continued with all the Lee children, who belong to the North Forty 4-H Club. Gage, the oldest, graduated from high school last year, but he’s still involved in livestock judging at Laramie County Community College in Cheyenne. In fact, that job pays for his tuition and books at college.

The seven who are still at home have had a very busy summer, preparing for this year’s Larimer County Fair in early August. Each has several projects to finish, and the three oldest hold down summer jobs as well.

This year, the four girls are raising chickens for the first time, and all seven will show steers at the fair. Other current projects range from a crocheted baby blanket (Laurielle, 12) to baking (Austin, 14) and leather craft (Emery, 16). Eleven-year-old Cate is building a table to go with last year’s impressive porch swing project.

Caroline, 9, is baking biscuits for the fair, while Cate’s twin, Claire, 11, is taking a leather craft project this year. Clairetook her apple pie to the state fair last year.

The Lees are also on the 4-H dance team. The three youngest girls, Cate, Claire and Caroline, will be going to state competition in early September as part of the junior line dancing team. Clancey, 17, Emery and Austin will compete at state in Western swing.
While the young people are getting their projects ready, parents Joe and Kelly stand by as a support team, making sure projects are moving forward and serving as chauffeurs.
Besides competing for ribbons at the fair, the Lee family has found that there’s a lot to learn from 4-H, plus some very fun opportunities.

There’s travel, for instance. The three boys are involved in the 4-H Exchange Club, which arranges visits to other 4-H homes throughout the continental United States. They returned recently from a trip to Corpus Christi, Texas.

Clancey was recently chosen to go to Washington, D.C. to participate in the National 4-H Senate next spring. He’ll be one of only seven 4-Hers from Colorado. He is also in the Junior Leader Club, where he has learned public speaking and the value of volunteering.
And of course there’s the county fair, the highlight of the year for 4-H members. Besides the friendly competition with their many projects, the Lee children enjoy just hanging out at the fair with their friends.

4-H also offers some real opportunities for helping young people succeed. “The scholarships are huge,” Clancey said, and having 4-H on a résumé gives students a competitive edge.
Life skills are learned in the process of planning and executing projects. 4-H members learn responsibility, time management and organizational skills, plus a lot about money management.

With a livestock project, Emery said, he has to figure out what the expenses will be and whether he can make a profit at the end of the summer. In one unfortunate real-life experience, he fed a steer for several months and one day it fell over dead. Potential profits were buried with the animal.

Through 4-H, the Lee children have actually learned how to build a business from the ground up. The family started with sheep as a livestock project, because Joe could buy orphaned lambs for just $5 each. With the money from selling the sheep, they invested in pigs and goats, finally graduating to steers. Each steer is like “a forced savings account” for college, Joe pointed out. When the steers are sold at the Junior Livestock Sale, the profits go into the bank.

Projects also build character, since calves must be fed and cared for regardless of the weather. “We don’t eat unless they’re fed,” said Laurielle with a grin.

Joe noted that the culture of 4-H is one of sharing knowledge. His children have learned skills from family friends and relatives as well as older 4-H members and 4-H leaders. “One reason our kids are successful in 4-H is the adult leadership who helped the kids,” he said.
For the Lees, 4-H isn’t so much about ribbons and trophies, but the road traveled to get to the fair. “You’re a winner if you take a project, you finish what you start and you learn something,” said Joe.

This reporter learned a few things, too. For instance, Austin makes a mean cinnamon roll.

July 29, 2011 admin Uncategorized Comments Off on No violation found at Mountain View Feeder

Larimer County commissioners took a unanimous stand in favor of commercial agriculture in late June, ruling on the side of Mountain View Feeder at 5200 N. Taft Hill Road (County Road 19). Despite a staff […]

The elm leaf beetle is back in Wellington and is busily feeding on elm leaves, causing them to dry up and die. The result is a whole lot of ugly, brown trees around town. Larimer […]

June 12, 2017 admin News Comments Off on Road Construction Near Greeley

KERSEY – The Colorado Department of Transportation will be doing extensive repair and repaving work to the frontage road for US 34 in Kersey during the evenings on Monday, Tuesday and Wednesday. On Monday night, […]