Jessica Lynn Gott grew up in Craig, Colorado, where she ultimately met and married Justin Anderson (originally from Mississippi). The young couple alternately resided there and in Yakima, Washington.

As their family grew, stay-at-home mom Anderson started searching for a hobby or avocation that would complement her maternal lifestyle. She tried several things, none of which felt right. Then when her daughter (firstborn of three children) celebrated a birthday, inspiration struck!

“I just never liked the taste of storebought birthday cakes,” she admitted.

So Anderson added her own sweet creations to the cookies and breads she frequently made. Not long after that first homemade masterpiece, cake batter spilled over from just her family’s needs into a commercial endeavor.

She diligently watched YouTube videos (“not a Pinterest fan”) but is basically a self-taught baker. By trial and error, she persevered. If something failed, she simply tried again and again until she got it right. She realized she loved what she did and was quite adept at it, too.

In 2011, Anderson officially began her business, called “Simply Cakes,” and developed a steady following of satisfied customers. When the family moved to Wellington in June, 2017, she, like her cakes, started from scratch. She’s currently rebuilding a clientele in Northern Colorado. 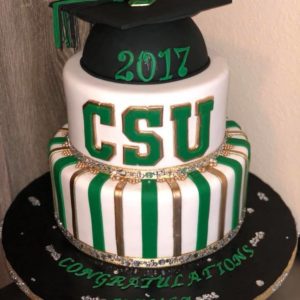 Anderson has a whole sanitized room dedicated to her business. A massive Scrapbox 2.0 cabinet, which houses 4,000+ cake-decorating pieces, closes into a customary cabinet shape, but magically opens into a double-sided, trifold, organizational wonder.

With a vast variety of tools at her fingertips, Anderson can create nearly any shape and flavor. She said she’s undaunted in her ongoing quest for unusual shapes and themes, which range from 6-inch to 24-inch in circumference. Additionally, she molds fondant into incredible shapes (such as a particularly beguiling mermaid). Everything in her inventory is edible or food-safe; for example, bubble straws hold up multiple layers.

Oh, and the flavors! One of her favorites is Kona coffee chocolate cake, which she described as very rich, like brownies. Another top seller is vanilla butter bean, made with Madagascar vanilla beans. She recently concocted a lemon poppy seed, and red velvet is also on her vast, ever-growing menu. Anderson finds a few ingredients on Amazon, but buys locally whenever she can.

“If I can get my hands on it, I can make it,” she proclaimed about special ingredient requests.

Some of her most fascinating cakes are actually 3-D sculptures— again, with everything used being safe to eat. For example, a customer in Craig had emailed Anderson a photo of a drum her husband played in a community band. The special order soon became a 3-dimensional birthday cake.

The husband was so impressed and moved by the gesture that when it came time to celebrate his wife’s big day, he commissioned Anderson to reproduce a pool table, symbolic of those his wife used in competitions. His spouse was so touched that she didn’t want to cut it.

While Simply Cakes is definitely a business venture, Anderson considers it a labor of love. She obviously enjoys both the creative process and the people for whom she bakes.

“I did my job if I can make someone’s special day even more special,” reflected Anderson.

That’s why, although she bases prices on the amount of detail and therefore time each cake entails, she willingly works with people who are on a fixed budget.

She explained, “I don’t want to be known as the ‘expensive cake lady.’ ”

A few other mouth-watering taste treats have joined Anderson’s cake business. These luscious offerings include French macarons and, especially for Valentine’s Day, chocolate-covered strawberries. The latter made the 2017 holiday her busiest ever. That clientele ranged from high-schoolers crushing on the guy/girl of their dreams to older men who still passionately adore their wives, said Anderson. She recalled happily dipping 125 berries into the creamy brown divinity, 24 per order.

For additional information about Simply Cakes, visit its Facebook page at https://facebook.com/cakesmadesimply/ or contact Jessica Anderson at jjide3969@gmail.com.

North Forty News Music, beer, and an outdoor setting—sounds like the recipe for a brewfest! The first annual Wellington Brewfest, a fundraiser to benefit Wellington Colorado Main Streets (https://townofwellington.com/194/Main-Streets-Program), an organization that promotes and supports […]

Dental Disease and My Dog- Do I Need to Worry?

February 13, 2019 Cynthia Wilson Columns Comments Off on Dental Disease and My Dog- Do I Need to Worry?

By Teva Stone, DVM Owner/Partner Wellington Veterinary Hospital As veterinarians, we see a number of dogs and cats with varying amounts of dental disease. Dental disease is often a subtle antagonist of health, and mild disease […]

New faces and directions for Wellington in the New Year

December 30, 2017 Marty Metzger News Comments Off on New faces and directions for Wellington in the New Year

by Marty Metzger mmetzger@northfortynews.com The Town of Wellington remains a beehive of activity as 2017 yields to 2018. Deputy Clerk Cynthia Sullivan reported that current and future needs are being further assessed before plans for […]