Nineteen of the state’s 22 district attorneys offices charged with enforcing Colorado’s laws are not complying with a 2012 law that requires reports on criminal offenses committed by K-12 students on school grounds or at school events. The reporting requirements of the law were enacted to measure the effects of eliminating the so-called zero-tolerance school-to-prison pipeline.

The 2012 School Finance Act and School Discipline Act, signed by Gov. John Hickenlooper in May, 2012, required district attorneys to file annual reports detailing number and types of offenses filed in court, disposition of each case, age, gender, school, race or ethnicity of each student prosecuted, the number of and types of offenses referred to the district attorney by law enforcement but not prosecuted, and number of offenders referred to juvenile-diversion programs.

The law specifies that the annual reports shall detail “information about offenses alleged to have been committed by a student that have occurred on school grounds…during the preceding 12 months” and shall be reported “on or before Aug. 1, 2013 and on or before each Aug. 1 thereafter.”

Law enforcement reporting, too
The 2012 law also details strict reporting requirements for law enforcement agencies that provide services on school grounds or at school events, but only 27 of the roughly 130 police department and sheriff’s offices in Colorado filed a 2013 report according to data the North Forty News obtained from the Division of Criminal Justice.

LCSO provides one School Resource Officer to 10 schools in the Poudre School District. Sheriff’s spokesman John Schulz said that the LCSO is aware of the annual reporting requirements but interpreted the law as commencing Aug. 1, 2014. Schulz said the department will submit a 2013-2014 school year report at that time.

Data that law enforcement agencies are required to submit under the 2012 School Discipline Act “beginning Aug. 1, 2013 and continuing each Aug. 1 thereafter” gives an objective assessment of offenses committed by students and mirrors the information the DAs are required to collect and submit.

The law-enforcement reports provide a more complete picture of crimes committed at schools. Annual school discipline records that school districts submit to the Colorado Department of Education don’t provide details of criminal offenses committed in schools, and call for service listings obtained from local law enforcement show only that police responded — not whether a call was founded or unfounded, or how or if the call was resolved. 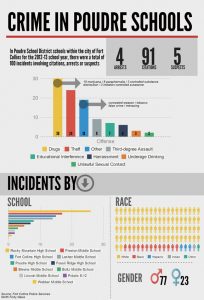 Crime at Poudre School District
The 2012-2013 notifications of arrest report that Fort Collins Police Services submitted to the Colorado Division of Criminal Justice as required by the 2012 law shows that schools within the city of Fort Collins had 100 incidents involving citations, arrests or suspects.

The majority of cited offenses detailed by School Resource Officers involved marijuana or drug paraphernalia possession, which did not rise to felony offenses. There were 23 theft citations at various schools and one theft arrest at Fort Collins High School.

The Fort Collins citations and arrests were composed of about 60 percent high school students and 40 percent middle school students. The overwhelming majority (75 percent) were male. Only about 15 percent of the citations or arrests involved persons of color — Black, Hispanic or American Indian.

DAs not aware of the law
But most concerning is that a large number Colorado’s top law enforcers — its 22 district attorneys — have not complied with the law. Only three of the 22 district attorneys, the 1st, 6th and 9th Districts, submitted the required reports to the state Division of Criminal Justice by the Aug. 1, 2013 deadline.

The Office of the District Attorney for the Eighth Judicial District and DA Cliff Riedel, based in Fort Collins, didn’t report 2013 statistics involving students.
“Most DAs offices were unaware of the upcoming statutory reporting requirement,” said Eighth Judicial District Public Information Officer Linda Jensen. “We have been tracking these cases since August 2013 and will be filing a report in August 2014.”

Lagging reporting causing concern
“School districts are doing a great job of reporting yearly data,” said Kim Dvorchak, executive director and founder of the Colorado Juvenile Defender Coalition. “Many, but not all of the law enforcement agencies are filing reports (involving school cases) and meeting the deadlines, but the district attorney’s offices are not. We’re very concerned about that.”

Dvorchak was instrumental in formulating and passing the 2012 school discipline bill, and worked alongside the Denver nonprofit Padres Y Jovenes Unidos in getting bipartisan support for it.

“We need that baseline data to see if the law is having any effect at reducing the incarceration of youth, particularly youth of color,” Dvorchak said. “It’s important to aggregate (the full three years, 2013-2016) to see if there were declines. And we’d like to be able to conduct some analysis now, but we can’t do that.”

There is no enforcement clause or penalty for agencies that fail to report, Dvorchak said, but she hoped that current legislators who sponsored the 2012 bill — including Sen. Linda Newell, D-Littleton — would do more to encourage agencies to comply. Phone calls by the North Forty News to Newell for comment on the reporting provisions of the 2012 bill were not returned.

The law also requires Legislative Services to review the data submitted through Aug. 1, 2016 and then submit a report to the Legislature in 2017.

Otherwise, there’s not much happening with the data. The 2012 law designated the Colorado Division of Criminal Justice to “be the recipient and the repository for the reports, and hand them out if anyone requests them,” agency chief Jeanne Smith said. “We were not given resources to do any more than that.”

Search for home sweet home in Wellington getting more expensive

If local Realtors have any complaints about doing business in Wellington these days, it is because there are not enough houses to go around. “I’ve sold every Wellington listing I had,” said Todd Patterson, a […]